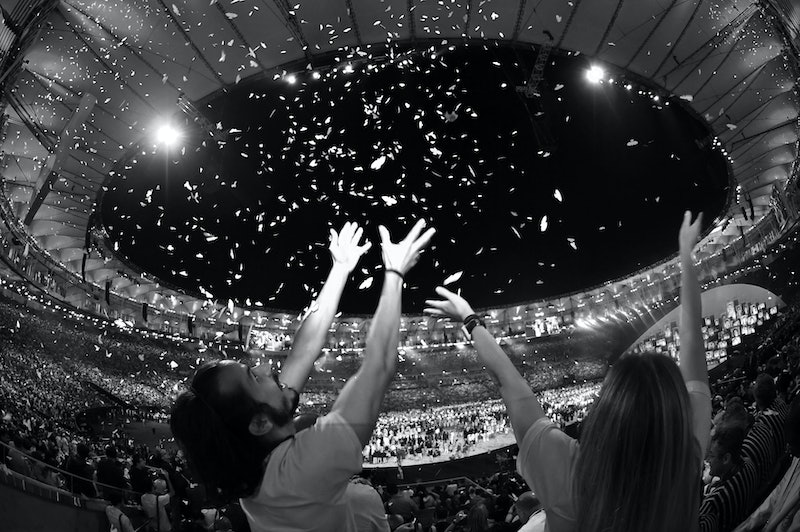 With the Olympics in full swing, and Team USA taking home trophies in so many categories, it's hard to think about the Closing Ceremony of the Rio Games 2016 already. Scheduled to take place on August 21, the event will not only celebrate the achievements of athletes at the Games, but will provide the future host, Tokyo, with the chance to show the world what they have in store for the Olympics in 2020 (yes, we are thinking about 2020 already). With the end of the Olympics fast approaching, how many people are at the Rio closing ceremony? One thing's for certain: it's going to be an impressive event.

The closing ceremony is being held at the Maracanã Stadium, a famous football stadium in Rio de Janeiro. As well as hosting the opening ceremony of Rio 2016, the stadium held the decisive matches of the Olympic football matches. The venue originally opened in 1950, when it hosted the FIFA World Cup, but it's undergone several renovations since then, most recently in 2013 ahead of hosting the 2014 FIFA World Cup. Since the renovation, the stadium seats just over 78,000 people, meaning that the audience for the closing ceremony of Rio 2016 will be absolutely huge. The organizers are bound to have lots of surprises planned for the night, and, with such a huge audience due to attend, the event is sure to be all kinds of impressive.

While the details of who will be involved in the closing ceremony are top secret, the night is going to be an exciting celebration for all of the athletes who have have taken part in the Rio Games 2016. Following on from such a well-received opening ceremony, which featured Gisele Bündchen, the closing ceremony is sure to be an even bigger affair. According to The Telegraph, a highlight of the closing ceremony could be an appearance by legendary football player Pelé. As the publication reports, "Pelé was expected to be the man to light the Olympic flame at the Maracanã but ill health forced him to stay at home." With only days to go before the Olympic Games wrap up for another four years, we're sure to hear many more rumors of what we can expect from the event.

With an expected audience of almost 80,000 people, as well as performers and athletes in attendance, the Maracanã Stadium is going to be packed out the closing ceremony of Rio 2016, and will show just what an amazing year it's been.