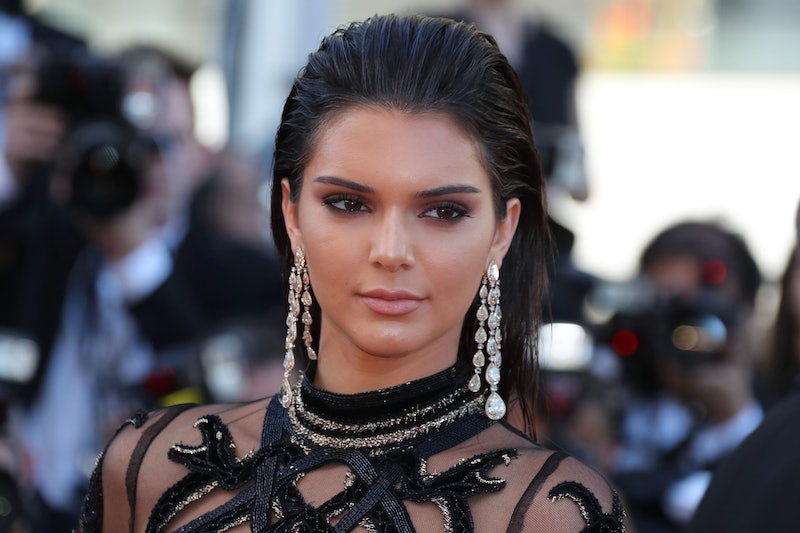 It's a collision of two reality TV worlds you never saw coming. Keeping Up With The Kardashians meets The Bachelor franchise meets the entertainment scenario of my dreams. Given that she's September's cover girl, Kendall Jenner happens to be the latest subject in Vogue's "73 Question" series. While she casually walks us through the incredible mansion she grew up in, the model reveals something I for one, didn't see coming. Jenner would love to be on The Bachelorette. I know, right? The reveal happens at the 5:06 mark, when she's prompted with “What TV show would you kill to make a cameo in?" Sure, the question was what show she'd like to make a cameo in, but why would we stop there? If she'd make a cameo, couldn't she just be the lead? It's not a far jump when you think and pray about it, like I'm doing right now. It could happen. Let's talk facts and statistics.

Jenner's a little young at this point to get the gig. She's only 20, which means that she's not legally old enough to hold the iconic glass of white wine like most Bachelorettes get to do during 90 percent of filming. Since the youngest Bachelorettes have both been 25 (Ali Fedotowsky and JoJo Fletcher), I'd say we've got five years, and then we're good to go. However, if she just wanted to be a contestant on The Bachelor, she wouldn't be too far off the mark, age wise. Contestants are getting younger and younger each season (or am I just getting older?). Emily and Haley Ferguson, for instance, were only 22 when they went on Ben's season. Cassandra Ferguson was 21 when she was on Juan Pablo's.

As for her schedule — given that she's a highly sought after and accomplished super model/very famous person — yes, it would be crazy to coordinate. However, those Jenner sisters like to keep themselves busy with multiple projects. They do so much. What's one more thing?

Then, there's this: Jenner already has a connection to the franchise and that connection just so happens to be her mother and manager, Kris Jenner. Not only do the pair share homonymic names, but Kris Jenner and Chris Harrison also share a friendship. Which means that if she really wanted to, she could probably get her daughter on the show. In fact, in January, Kris was asked about this very thing.

Kris called into an episode of The Bachelor Live and answered a question from a fan on Twitter, who asked “Which one of your children (if they were single) would most likely go on The Bachelor to find love?” Kris said, “I don’t know, I would say one of the younger ones, but Kendall wouldn’t go for it." However, don't get discouraged. She then added, “I could talk them into it, though.” That was seven months ago. Maybe she has.

Kendall's presumably not in any serious relationships right now (or she's just really good at keeping quiet about them). She's incredibly successful. She has a good sense of humor. She's too busy to meet anyone in a regular setting. She's already a recognizable face with a massive following. And, on top of all that, she understands reality TV. She checks all the Bachelorette boxes and then some. In a few years, when The Bachelorette's on its approximately 800th season, Kendall Jenner might just be the shake up the show needs. You heard it here first.