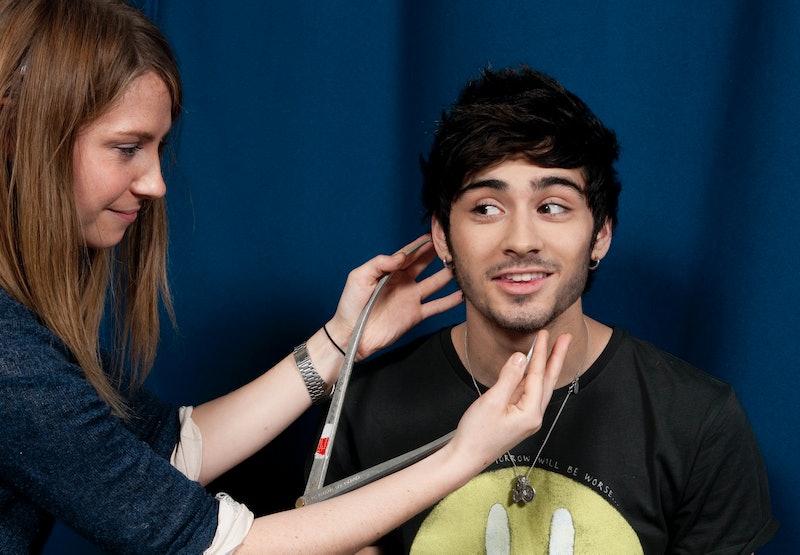 In news that is sure to surprise everyone, an artist has made a sand statue of Zayn Malik. I'm serious — a statue of Zayn made entirely out of sand has been unveiled in his hometown of Bradford, UK, and it's meant to pay tribute to the singer and all his successes. While there is already a wax model of Zayn in London's Madame Tussaud's location, which is arguably more lifelike, the sand version is special because it focuses on the Mind Of Mine singer, rather than his One Direction bandmates. However, Zayn's sand model has been drawing criticism for not looking enough like him and, when you see it, I think you'll agree it's not the best likeness. Which is why it's time to consider 12 things Zayn's sand statue looks like more than Zayn. Because, I'm sorry, it really looks nothing like him.

Any statue is clearly a great honor that signifies that a person has achieved great things. I'm not convinced that the former boy band member will be that happy with his, although Zayn's mom Trisha has already posed for photos with the work of art. Whether you love it or hate it, you won't forget Zayn's sand statue in a hurry, that's for sure. But what else does the amazing object look like?

1. A Sandcastle You Spent All Day Building As A Kid

Were my sandcastles ever as impressive as the Zayn sandcastle? I thought so at the time...

2. The Thing from Fantastic Four

Zayn has superpowers. End of discussion.

4. Michael Socha from Once Upon A Time

The Once Upon A Time actor has a striking resemblance to the real Zayn, at least!

Zayn's sand sculpture has the shade of some lovely beige wall plastering.

Zayn's model looks like a man who ate so many crackers that he turned into one.

Because Zayn is every bit as iconic as a President?

8. The Goblin At Gringotts Wizarding Bank In Harry Potter

Who just happened to be played by Thomas Haden Church!

11. Some Pottery Created In The Movie Ghost

12. Justin Timberlake In The "It's Gonna Be Me" Music Video

Such a smooth face.

Congratulations Zayn on the amazing accomplishment of having a life-size sand statue made in your honor!