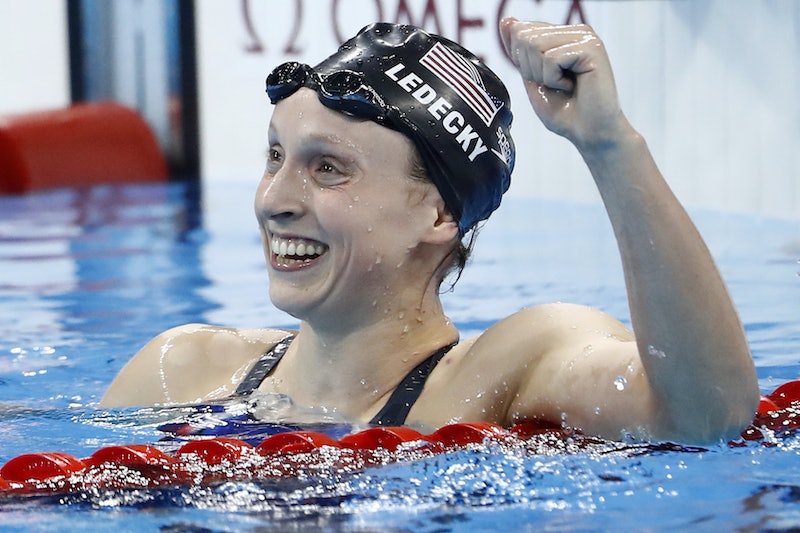 It's been an incredible 2016 Olympic Games, and the last moments finally upon us. As say goodbye to the games, we also say goodbye our favorite athletes, so is Katie Ledecky at the Rio Closing Ceremony for us to say goodbye, too? Even though these athletes still exist in real life, of course, it does sort of feel like these seconds before the Olympic torch is extinguished are our last chance to see these heroes for another four years. At the very least, it's our last shot at seeing them in this frozen moment of glory, which is why it's so disappointing not to see Ledecky's shining face in the crowd.

Everyone at the Olympics is by definition a star at the top of their respective sport, but Ledecky is so dominant that she really takes it to another level. At the Rio Games in particular, she has changed the way her events need to be covered; again and again, we heard commentators saying that the race was between Ledecky and the clock, and everyone else was just vying for second.

Although she's just 19 years old, this was already Ledecky's second Olympic Games, and she didn't come in empty-handed. In 2012, going up against seasoned athletes like reigning Olympic champion Rebecca Adlington of Great Britain in the 800m freestyle, Ledecky not only leveled the field to take home her first gold, but only just missed the world record. As the age-equivalent of a sophomore in high school. Four years later, she handily crushed her own world record in the same event, the 800m freestyle, finishing over 10 seconds before her closest competitor. By the end of the race, they barely had a camera angle wide enough to encompass both Ledecky and her (world-class) competitors, because they were so far behind. She looked like she was swimming in a pool by herself, and honestly she might as well be. That's how good she is.

At this Games, she's raked in another five medals — four golds and a silver — and become the first woman to sweep the 200m, 400m, and 800m at the same Olympics since Debbie Meyer in 1968. The seemingly-unstoppable swimmer also took home gold in 4x200 m freestyle, and a silver 4x100m freestyle, both relays that she anchored for her team, and in the words of Michael Phelps himself, she's "breaking records every time she gets in the pool." Huge words from a fellow Team USA member so talented in his own right, and exactly why we were hoping to glimpse her face at these Closing Ceremonies. In many ways, she really was the star of these Games, and it would've been great to see her basking in all our love and support.

But at the end of the day, we can't fault her for not being here, because this talented teen has a reputation to keep up. She's gotta get back to the United States at least 10 seconds before the person behind her. I don't begrudge her the head start.