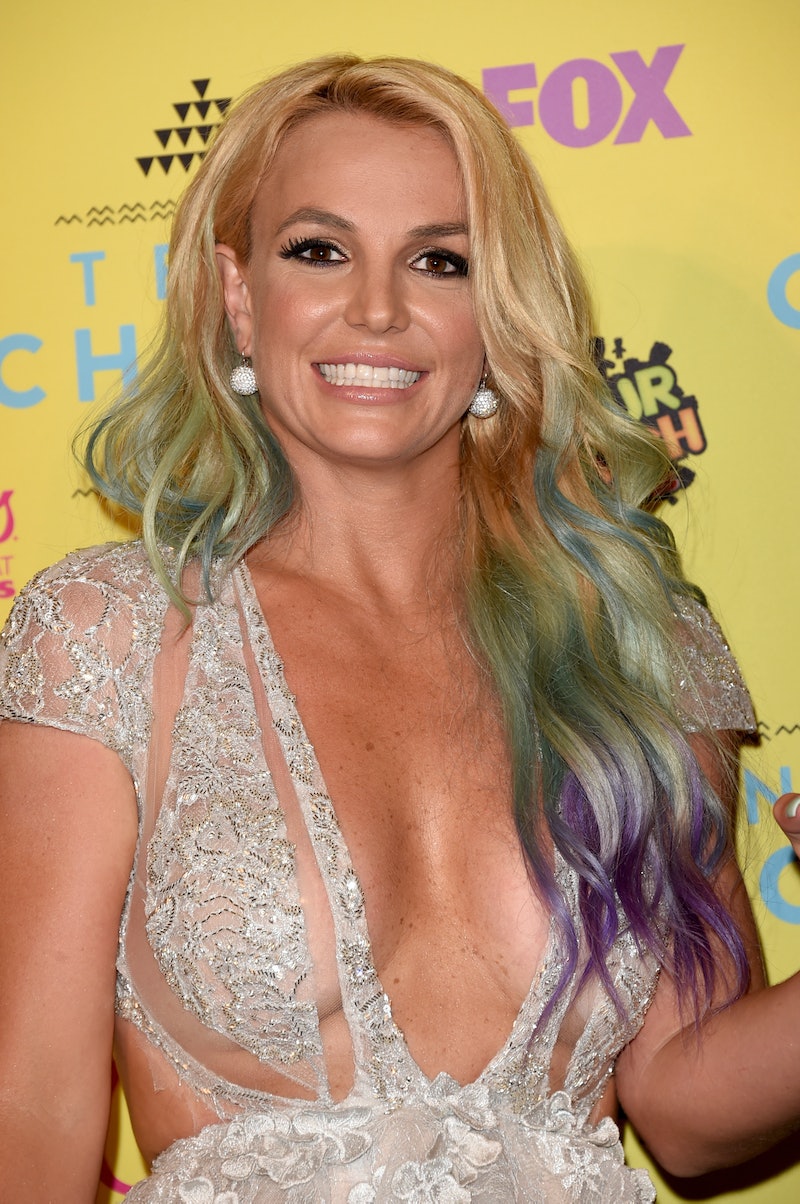 With America being only a handful of days away from the release of Britney Spears new album, Glory , excitement over the pop goddess' bombastic return has reached a critical state. I'm talking about hearing the cosmic throngs of Spears' sensual "Make Me..." blasting out of almost every bar and coffee shop in town, and having 2 a.m. debates with total strangers over which music videos are Spears' best — the pop queen is in the house, people. So it's truly thrilling to be hearing all of the new singles which are being slowly teased from Glory in the lead up to the album's release. Following the release of "Make Me...," "Private Show," and "Clumsy," Spears has released "Do You Wanna Come Over," and it's a beyond chill, hook-up anthem.

Seriously, get the Netflix ready, chill some wine, and throw your sexiest / laziest pair of sweatpants on. Things are about to get seriously (and comfortably) sexy around here. Featuring a pulsating, sporadic bass-line, and a guitar-lick which is eerily reminiscent of the one from Justin Timberlake's "Like I Love You," the lyrics from Spears' "Do You Wanna Come Over" basically sum up my idea of a perfect date: Just two people hanging out, respecting each other and making each other happy in whatever manner that sort of thing requires. Bliss.

Should you be in any doubt that Spears is just all about keeping this hook-up simple, easy and cosy, then just take yourself a look at the lyrics from the first verse:

Say you feel aloneThat your day was the baddestTellin' me you can't sleep because of your mattressDo you wanna come over?

It's basically a lazy-lovers litany of excuses (all of which I've definitely used in the past, FYI) for wanting to just pop round to a potential hook-ups place and make with some sex. These are lines which perfectly sum up the millennial zeitgeist of attitudes towards relationships and sex. Why make things difficult? Why play games? Sometimes your mattress genuinely is the worst or you've had the day from hell, so why not use these personal disasters as a fine opportunity for making some intimate magic with somebody.

"Do You Wanna Come Over" then leaps from the "any old excuse to see you" stage of the song to lyrics that celebrate the idea that casual relationships don't need to be lacking respect or understanding. You don't have to be in love with, or committing to, the person that you're hooking up with, but that also doesn't mean that you can't connect with them on a different level than just sex.

Let me rub your backYou can set limitationsHoney if you want we can get out frustrationsDo you wanna come over? Just let me know

In fact, Spears makes it clear here that it's kind of even cool if her hook-up doesn't want to have sex. Her partner can draw the boundaries of where the massage she's offering starts and ends, and if it remains as nothing more than a back rub then so be it — that's totally cool, and I am so feeling it right now. Spears actually elaborates on this idea a little more in the second verse where she actually raises the roof for one of my own personal favorite past times: doing nothing.

I could get into that kissin' and touchin'Or we could be good and do next to nothin'Do you wanna come over?

For real, I'm wishing that I could swipe right on this near-perfect invitation that Spears is putting out into the universe here because it sounds totally perfect. The song just gets the fact that smooching up a storm and taking your clothes with another person can be the best thing ever, but sometimes all you want to do is hang out with someone (clothing optional). Pizza, Netflix, a six-pack of beer, and someone who's more than happy to rub your feet for you is quite honestly one of the best combination of frustration busting, happy making activities in existence.

At it's heart, then, "Do You Wanna Come Over" is not only a tribute to comfortable, easy hook-ups, but also a positive affirmation on the value of companionship and emotional intimacy. Though Spears may spend a great deal of her songs singing about how great it is to bump and grind with somebody and to feel supremely sexy, "Do You Wanna Come Over" is unique for it's reminder on the essential need to simply chill out with someone every now and then.

Loneliness can be a truly debilitating feeling, and, though physical intimacy can be important, emotional intimacy and the chance to kick back with someone is just as important too. As Spears herself says in the song, "Nobody should be alone if they don't have to be." Amen to that, lady. I'm now totally inspired to message my honey and invite them round for a foot rub, Netflix comedy special, and pizza party ASAP.