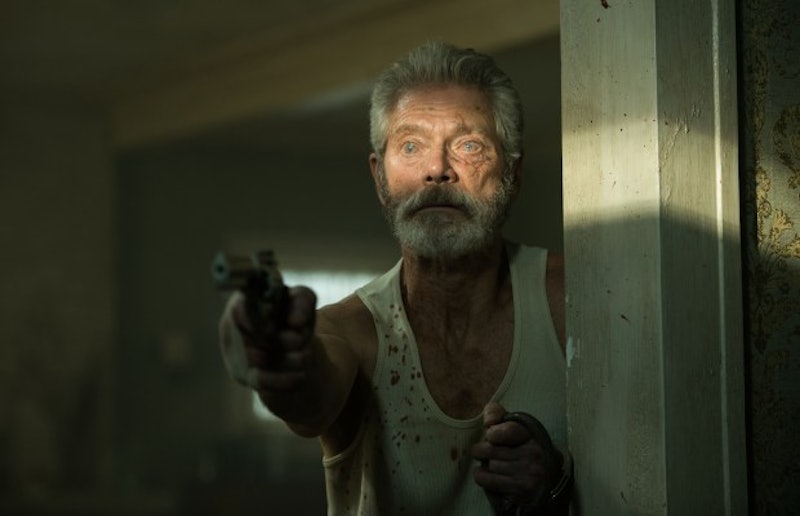 The new horror film Don't Breathe does something unusual. The film depicts the struggle of a blind old man, who is forced to fend off a group of delinquent teen robbers who break into his house in the middle of the night hoping to steal from his rumored basement safe. So what's unusual about the movie? Well, the blind robbery victim is actually meant to be the villain of the film, and the audience is expected to root for the would-be robbers as they try to escape his house with their lives. It's certainly unorthodox, but is Don't Breathe based on a true story?

There's a reason the story is so unusual, and that's because it's definitely not a true story. Don't Breathe is 100 percent a work of fiction, created by director Fede Alvarez after the poor reception of his previous film, a remake of cult classic Evil Dead . Essentially, he wanted to make something that was the opposite of that film. Therefore, it wouldn't be gory, it wouldn't have a supernatural element, and it would be wholly original. "Those were self-imposed rules," Alvarez told Comingsoon.net. As for the other main elements of the film, the robber protagonists and the blind antagonist, those details arose from the director wanting to do something unique. Here's what he said about forming the idea of the movie with co-writer Rodo Sayagues:

"Thinking what is always tense and creepy and scary and the conclusion was breaking into someone’s house ... When you walk into someone’s domain, it’s their rules, the king of the house can do whatever they want. That kind of triggered the idea of telling the story of three robbers. And it’s fascinating hearing the stories these kinds of guys go through ... it’s a real life, every day adventure that most of us never have but these guys have all the time. So it must be interesting to see a movie through their eyes. The blind man came from, we need an original character who was unique to be the owner of the house and the antagonist. Sometimes you naturally give them powers and make them more menacing than a normal person, so we thought what if we do the other way around and take his eyes out and make him a blind person. So suddenly that really sends everything to a different level. Those were the ideas we had one day driving back from Comic-Con in San Diego to Los Angeles with my co-writer and we start cracking the whole idea of the movie and we got super excited about it and everything that happened in the story was just part of the process."

The reason Don't Breathe seems so original is because it is. The movie is not based on a true story, or any story for that matter, which makes it unlike anything you've ever seen before.