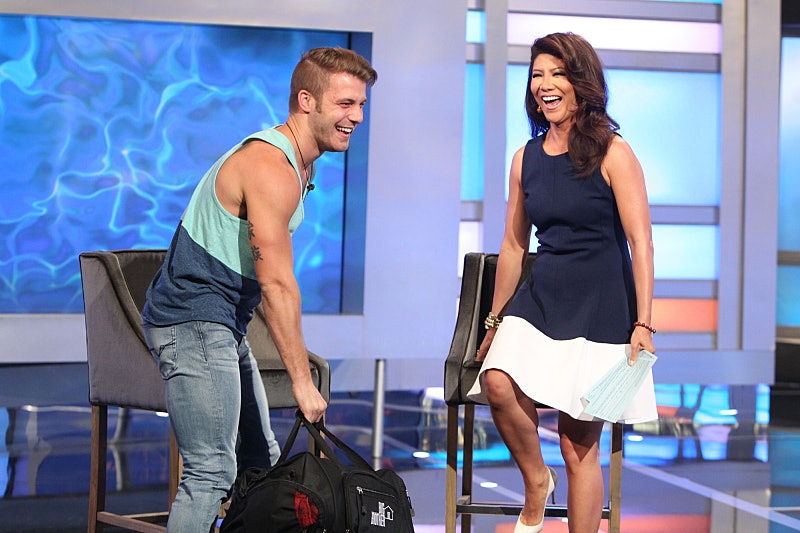 There was never more of a surefire eviction thus far than when it was Paulie's turn to leave the Big Brother 18 house. These last few weeks have been nothing short of an emotional and tumultuous firestorm for him, all stemming from a rather nasty argument between him and Natalie. In an email interview with Bustle, Paulie finally reveals his thoughts on the Natalie fight. And, surprisingly, it seems Paulie may believe that his reaction to Natalie's statements was justified. "In my opinion, if you are going to step up and say the things you did about James and Zakiyah without having any substance behind it, when you are guilty of doing the exact same thing, then you leave yourself open for confrontation, and, if you are not a confrontational person you should never throw stones when you live in a glass house," he claims, though it's not clear what things he's referring to Natalie allegedly having said about James and Zakiyah.

In the cold light of day, out of the Big Brother house and able to comment to the public, one might think Paulie would express some sort of apology for his actions. His comments to Natalie during his fight, including calling her "as fake as those things on your chest," were harsh. Those comments not only went over the line, but further proved Natalie's feeling that Paulie was the only choice for eviction.

Paulie's icy regard for Natalie, and the way she treated him in his final days in the Big Brother house, connects to a larger and more fraught relationship he has had with the other women of Big Brother 18. While Paulie brought up the cogent point that Big Brother is all about playing a certain kind of game, the way he defined it when asked whether he regretted what he said to any of the women says a lot. "I don’t regret anything that was said or done in the Big Brother house," he says.

"I went in with the mindset that this was a game and I was going to play the game in whatever manner was going to get me to the end. When you go into the BB House you have to gauge the environment that you are put in. The environment this season from day one was trash talking, cattiness, and pettiness. In order to keep on a façade of fitting in with whatever group had the power, you sometimes had to pretend to be a person that you are not. Any comments that were made by me were not only said by me they were said by everyone, male or female. If the girls are going to tear each other apart with their words and you are stuck on a side where if you stick up for them you are then looked at in a different light, sometimes you have to blend in and wait for the right moment."

Here's the problem with that statement: Paulie was the only one in the house speaking about another person's physical appearance in a disparaging, misogynistic fashion,and casually claiming his relatives would "beat the s**t out of [Michelle and Bridgette]." These comments based in violence and degradation stretch outside the limits of traditional Big Brother competition strategy. I can't recall a time when any other player (including Frank Eudy, who deeply irked Da'vonne with his misguided touching of her posterior) was as transgressive in their approach to another player. Moreover, Paulie's belief that he was somehow playing the game as strategically as his fellow houseguests is troubling, as is his defense of his statement. If this was his thought process during his time in the Big Brother house, then his statements about Natalie and the ways in which he appeared to manipulate Zakiyah through a showmance paint an especially unkind picture.

His statements hit me in the gut because his feelings echo the one thing I have not been a fan of this season. There's been a simmering double standard in the way that the women of Big Brother 18 — notably Michelle and Tiffany — have been targeted for their highly emotional moments. In comparison with the somehow eternally stoic men in the house, these women have been perceived by others in the house as loose cannons, threats to the game, et al. This is simply a false thought process. Big Brother is as much a emotional game as it is an mental and physical one. That does not mean that a sweeping assumption based on gender should have been made foundational to a Big Brother houseguest's strategy.

While I don't believe that Paulie is himself a bad person, I do think that the way he has chosen to relate to the women of the Big Brother house has been a problem. Now, he is set up in the Big Brother Jury house with three women whom he had very strained relationships with: Bridgette, Zakiyah, and Da'vonne. Whether he admits it or not, each of these women were ousted by his own design. In the case of Bridgette and Zakiyah, Paulie faces a tough living situation as both of these women felt the more negative effects of his gameplay.

Can Paulie be redeemed during his time in the Big Brother Jury house? Will he be able to come to terms with the fallout of his actions? There's a lot that can happen between now and the Big Brother 18 season finale. While I am worried about Paulie's past treatment of his fellow female teammates, a part of me hopes that a kinder side of him will come out soon.