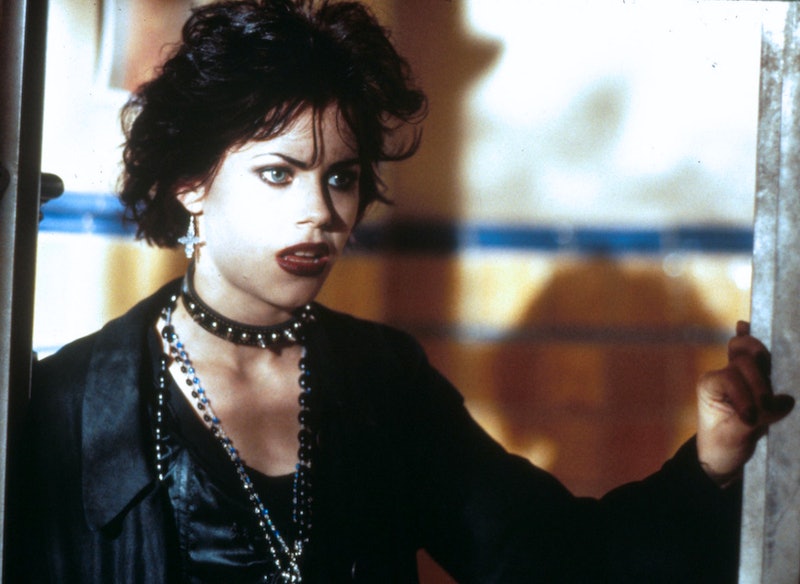 Horror movies aren’t the first place most of us would likely think of when looking for outfit inspiration. Between the murder, blood, guts, and terror, the last thing on many of our minds is what the protagonists may be wearing. But that doesn’t mean there aren’t horror movie heroines with amazing style. Regardless of being worlds populated with witchcraft, wolves, serial killers, and cults, there are plenty of subcultures and darker sections of society that are inspiring in terms of dress — and not just for those of us who appreciate the grimmer things in life.

Though the world of horror films may be populated with many fabulous witches and goths killing it in the literal sense of the word, there's more to many horror heroines than lashings of black and an arguably unhealthy taste for human blood. From Carrie’s satin sleep and rib-squeezing corsets to ‘90s wardrobe envy and Paris Hilton-esque trashy chic, you may want to stop covering your eyes and peeping through two fingers when watching a scary film. After all, you might just be missing some of the best outfits seen on the silver screen.

Blood and guts not included, below are 15 of the most stylish horror heroines from the past few decades.

Carrie's satin nightgown and twinkling tiara may have ended up dowsed in pig blood, but the lashings of red liquid were part of what made the original tale of tragic prom queen terror so memorable.

In this case, the coolest girl in school ended up killing off the high school sweetheart. But lack of moral compass aside, Courtney (portrayed by Rose McGowan) had the early '90s wardrobe so many of our dreams are made of: From sleeveless Polo necks, to super cute two-pieces, and an eyeshadow game so strong the most skilled makeup artists would go green-eyed with jealousy.

Telling the tale of a voodoo queen seeking revenge on a group of white gangsters, Diana "Sugar" Hill's wardrobe in Sugar Hill epitomized everything great about '70s style: Big collars, skintight catsuits, and hair bigger than her head itself.

4. Helen In I Know What You Did Last Summer

I didn't make prom queen, but if I did, I would've turned the accolade down unless it came with this amazing mermaid-style sea crown.

Sporting luscious long curls and a wardrobe jam-packed full of amazing corsetry and take-your-breath-away dresses, Winona Ryder's wardrobe in Bram Stokers's Dracula was almost pretty enough to distract us from all the blood-sucking taking place throughout the film.

Keeping it low-key in a white tank top, Jeryline (depicted by Jada Pinkett Smith) stole the show in this horror flick with her blonde crop.

7. Laura Palmer In Fire Walk With Me

The girl-gone-missing captured the imagination of the entire small town of Twin Peaks and the whole nation of America with her plaid skirts, bouffant hair, and scarlet pout. I for one am waiting with baited breath to see if Laura's perfect wardrobe makes it back for the upcoming Twin Peaks reboot.

8. Nancy In The Craft

Epitomizing gothic teen angst, Nancy's wardrobe of spiked collars, crucifix earrings, and her religious wearing of black lipstick have found their way into the wardrobes of countless contemporary teenage girls inspired by the now cult-flick.

9. Paige In House Of Wax

Paris Hilton may have been stripped of most of her high-end wardrobe for her role in the House Of Wax remake, but she managed to pull off her signature blonde hair and sass as though her life depended on it.

10. Queen Akasha In Queen Of The Damned

With Aaliyah playing the starring role as queen of the vampires, you just know the wardrobe department was going to be on-point.

There's a reason Rose McGowan keeps popping up on this list in various different character guises: She's played some of the most badass heroines in the horror genre.

Using her wardrobe to rebel and set herself apart against her high school clique — who also happened to be the most popular, bitchy girls in school — Winona Ryder as Veronica in Heathers proved that everything from a monocle to mourning outfits can be pulled off with the right attitude.

13. Claudia In Interview With A Vampire

With #bonnetcore being one of the past year's biggest (and weirdest) trends, a very young Kirsten Dunst was rocking the look with perfectly cute ringlets way back in 1994.

Dr. Miranda Grey (played by Halle Berry) may have kept it fairly safe with Polo necks and leather trenches in Gothika, but there's no denying these wardrobe staples always work as casual sartorial choices.