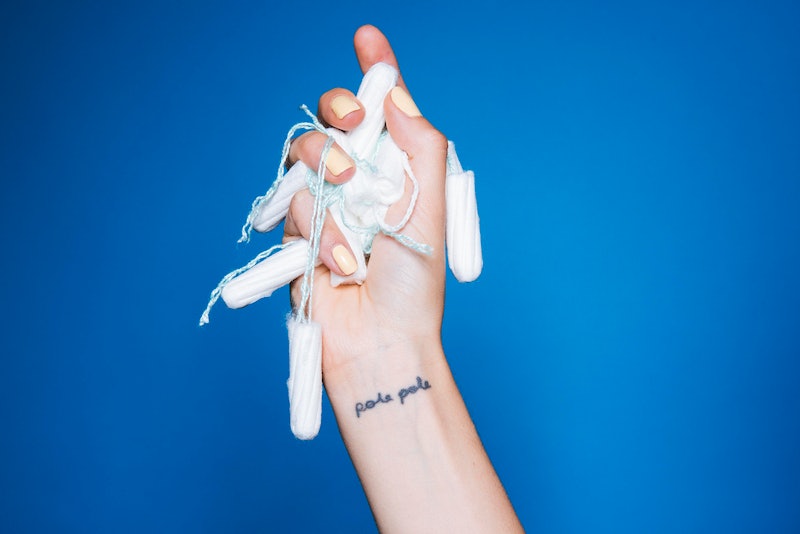 Lately, it's come to our attention that many U.S. states tax tampons and other menstrual supplies as luxury items, as if access to these supplies were a luxury rather than a necessity. Fortunately, though, as we're realizing how ridiculous this is, governments are being held accountable. The number of states without a tampon tax is increasing, and Illinois just became the latest. Starting Jan. 1, 2017, residents of the state won't have to pay a tax on tampons or pads.

"This is just the start of a conversation about the unfair 'pink taxes' women face as they buy products priced higher than similar ones marketed to men or, in this case, as they have to spend on products that men don't," the bill's sponsor Senator Melina Bush said in a statement released to The Daily News. Indeed, the tampon tax is just one of many ways in which women and feminine-presenting people are financially penalized. On top of that, women's versions of gendered products tend to be more expensive, and women pay more for healthcare, largely due to high cost of birth control and pregnancy. Add this to the pay gap, and women in the U.S. generally end up facing more financial burdens than men do.

And it's not like taxing tampons is consistent with other state policies. To put this into context, products including cowboy boots, Viagra, and candy are tax-exempt in various states across the country. So why on earth do we still tax tampons?

Fortunately, many governments have realized that there's really no good reason. So far, here are the U.S. states where you won't be penalized for having a period.

New York is the latest state to get rid of its tampon tax aside from Illinois. The state passed a bill to abolish taxes on tampons and other period supplies on July 21, and it goes into effect Sept. 1. “This is a regressive tax on essential products that women have had to pay for far too long and lifting it is a matter of social and economic justice,” Governor Andrew Cuomo said in a statement about the new legislation.

Massachusetts is one of five states to drop the tampon tax between 1975 and 2005, along with the four below. Pads and tampons are both on its list of exempt items.

New Jersey makes pads and tampons tax-exempt, along with a number of other useful period-related items like heating pads and birth control preparations.

Maryland designates pads and tampons as medical items that aren't taxable, along with baby oil and baby powder.

As Elle Woods could tell you, Delaware doesn't have a sales tax, and neither do Oregon, Montana, New Hampshire, or Alaska, so naturally, they don't have a tampon tax.