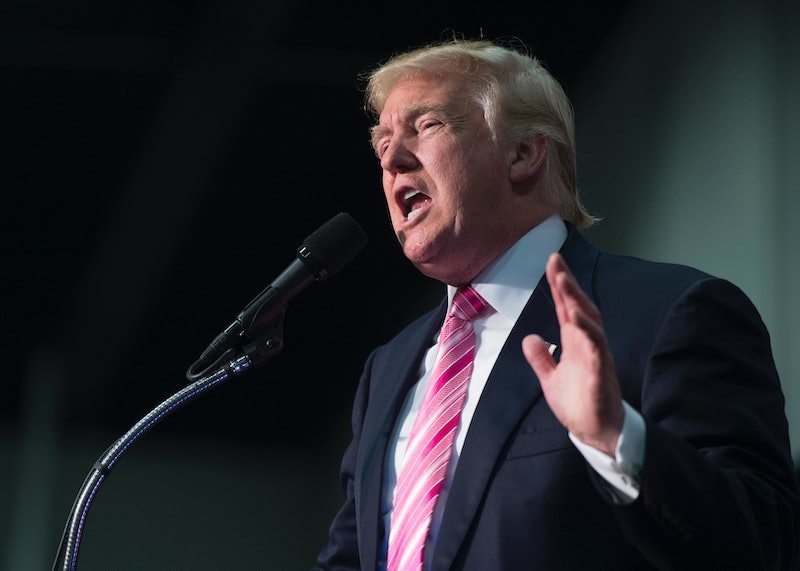 In an unpleasant but not altogether surprising development, it appears that Donald Trump staffers have posted racist comments on Facebook and other social media outlets, according to an Associated Press investigation. Bigoted comments about Muslims were especially common, the AP found, but black and Hispanic individuals were also targeted in social media posts by former and current Trump staffers. Bustle has reached out to the Trump campaign for comment, but has not heard back as of the time of publication.

“We need Islam control, not gun control,” an image posted by Trump field organizer Teresa Unrue on Facebook read, the AP reported. Mark Kevin Lloyd, a Trump field director in Virginia, shared a post calling Islam “a barbaric cult,” while Marie Delgado, a former Trump grassroots organizer, reportedly bemoaned the appointment of Muslim judge in New York, saying that “this is how American culture will end.” Another staffer allegedly posted a meme mocking Mexican accents, while Unrue reportedly shared a video of a black man eating fried chicken while criticizing other black people for being irresponsible.

Several of the staffers spoke to the AP about the posts in question. Unrue told the AP that she attempted to stay positive in her personal social media posts, and referred questions to the Trump campaign. Delgado said that she didn't remember making some of the posts, and that she doesn't stand by the others ("If I read the whole thing, I probably wouldn't have posted it," she said of a post she shared asserting that Muslims could not be good Americans). Lloyd, citing his nondisclosure agreement with the Trump campaign, didn't comment on the story to AP.

The AP reported that it found “little questionable content” among the upper echelon of Trump campaign officials — which, I suppose, is a good thing. Nevertheless, this is part of a disturbing and well-established trend in the Trump campaign. In addition to the indisputably racist comments Trump himself has made, he and his associates have many indirect, but no less damning, ties to unabashed bigots of all stripes.

There was the time the Klu Klux Klan endorsed Trump for president, with the group explaining that “a lot of what he believes in, we believe in.” When asked about this, Trump refused to denounce either the KKK or white supremacy in general. In 2015, a Trump adviser was fired using the N-word on social media, Bloomberg reported, and Trump's campaign was widely condemned in June for posting a coded antisemitic image of Hillary Clinton on Twitter. Trump has denied any allegations of racism.

The AP didn't just look into the racism behind Trump campaign staffers' social media pages — it also looked at over 19,000 stolen emails from the Clinton campaign and reviewed them for racist or inflammatory content. It found “nothing of note.”