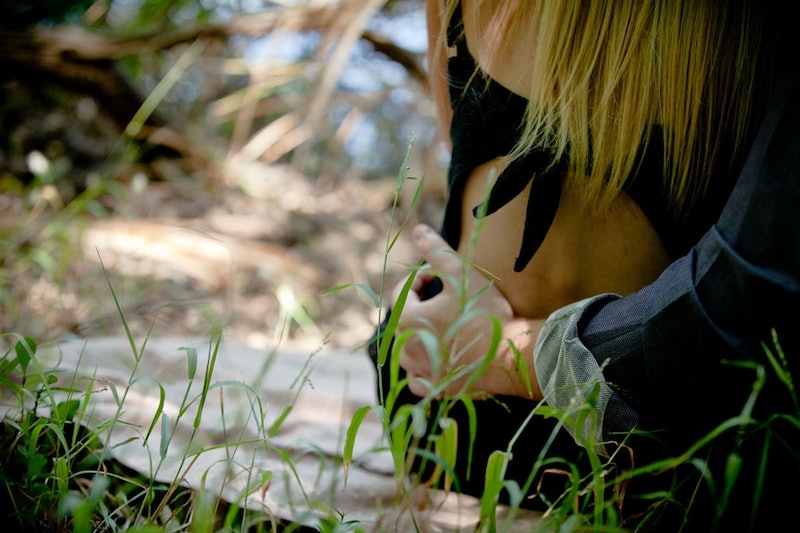 If you're in a long-term relationship, then you know there are some things that only become OK once you've been together a while. These same things, if they crop up too early in a relationship, can be total red flags. I'm talking about quirks and eccentricities (and problems, tbh) that are only easily handled by the most seasoned of couples.So what is it that makes these deal breakers more acceptable down the road? The first thing is communication, and the second would be trust. (Lots and lots of trust.)

"There really are no problems, quirks, issues, disagreements, or arguments that are unacceptable in the beginning of a relationship and then suddenly become acceptable later in the relationship," says Dr. Fran Walfish, Beverly Hills child, parenting, and relationship psychotherapist, author, The Self-Aware Parent , and co-star, Sex Box, WE tv, in an email to Bustle. "On the outside looking in it might appear that way, but, in fact, something very different and crucially important has been operating. It’s called healthy communication."

Communication is something that becomes more natural once you guys have been together a while. And the same goes for trust. "The reason a few months or years into a relationship some things become more acceptable is because it takes time to develop trust," Walfish says. "There are no shortcuts." With that in mind, read on for examples of what's not OK early on in an relationship.

1. Not Being Happy Every Waking Moment

Once you get comfy in an established relationship, you can expect 24/7 blissfulness to kind of taper off. It's part of the transitional phase into real life, and it's completely normal, according to Lauren Seldon on HuffingtonPost.com. You do, however, want those first few months to be pretty darn happy. Since everything kind of evens out after the honeymoon stage, things should start on as high a note as possible.

2. Making Jokes At The Other's Expense

Couples who poke fun at each other are kind of adorable. It shows they've been together a while, and that they know what is OK to say. But for that very reason, making jokes at the other's expense usually doesn't work for new couples. If your SO throws snarky remarks your way too soon, it may end up being a deal breaker.

Yes, you should both carve out time for yourselves, even in the earliest days of the relationship. “Washing a car, walking a dog, or exercising alone are signs of a healthy relationship with a secure attachment,” Lanada Williams, a licensed counselor, told the Huffington Post. But if your SO is demanding tons of alone time early on — especially during that impassioned honeymoon phase— it probably ain't a good sign.

4. Poking Fun At Each Other's Quirks

As Walfish pointed out above, communication is what makes relationship issues easier to handle. And this is especially the case when dealing with each other's quirks. "For example, during the beginning of your courtship you may be super sensitive if your guy pokes fun at your tardiness," she says. "As the relationship develops and deepens, hopefully you have discussed the issue openly and owned up to your challenge with punctuality. Later in the relationship, you might be able to join him in a giggle and laugh at yourself when you lag behind 10 minutes!"

Of course every couple is different, but it's pretty common knowledge that most relationships start off super sexy, and then dwindle in that area over time. Again, this is totally normal. But it's also why you should think twice if things aren't too hot early on. "At some point, you're going to have to figure out if you're just not compatible in this area," noted Gena Kaufman on Glamour. Infrequent sex can definitely be a sign.

6. Being Kind Of Gross In The Hygiene Department

If you're in a long-term relationship, then you know things can get gross. You guys spend a lot of time in pajamas, eating food on the couch, and "forgetting" to shower. This is more than acceptable once you're both in love, but it definitely isn't cool in the early days of a relationship. In fact, according to Katherine Schreiber in Cosmopolitan, poor hygiene is something many people consider an absolute deal breaker.

7. Not Putting In Any Effort

I'm not saying long-term couples shouldn't put in any effort. But we all know that little niceties start to become less frequent as time goes by. Maybe your SO used to bring home flowers, or you'd cook him or her their favorite dinner. Once you've been together a while, life gets in the way and thee things don't happen as often. In a new relationship, however, you should both be going above and beyond, and doing sweet things as often as possible.

8. Arguing All The Damn Time

There's nothing wrong with a little bickering, or a few disagreements here and there. But these arguments tend to be way worse in new relationships, since you guys don't yet know how to communicate. "Once you know your 'hot buttons' or vulnerable spots, you can learn to talk openly with your partner about what feels good and what doesn’t," Walfish says. And that, of course, takes time.

9. Having A Wandering Eye

You know your relationship is secure when it feels OK to admire other people. "You may be utterly in love with your partner, but that doesn’t mean you can’t admire a hottie with a great set of legs," Seldon said. This doesn't really work in new relationships, however. Unless you guys have an agreement, a wandering eye can be a sign that one of you isn't ready to be in a relationship.

10. Being Weird With Money

Once you know your partner well, it becomes much more normal to share bills, or spot each other when the other is short on money. But in new relationships, it's simply not OK for your date to show up without their wallet, or to never reach for the check. It probably means they aren't very serious about you, according to Marianne Wait on WebMD.com, and that's not cool.

11. Staying Home All The Time

In the early days of a relationship, I can only hope you guys are getting out there and enjoying the world. Because before you know it, you'll both be holed up at home and ordering delivery on the regular. While it's perfectly fine to do this if it makes you both happy, it's just so much more acceptable to get lazy once you've been together a while. Putting in some effort in those early days is not only healthy, but it's a lot more fun.

Once you've been together a while, the rules start to change. But you should definitely keep an eye out for these early red flags — and potential deal breakers — when dating someone new.

More like this
20 Things You Should Never Tolerate In A Relationship
By Rachel Sanoff and Kathleen Ferraro
The Best Time To Date After A Breakup, According To Experts
By Bustle Editors
Kendall Jenner & Devin Booker Have Seemingly Reconciled Just Weeks After Split
By Jordyn Tilchen
25 Things I've Reduced My Life To, In Addition To WFH In My PJs
By Ginny Hogan
Get Even More From Bustle — Sign Up For The Newsletter