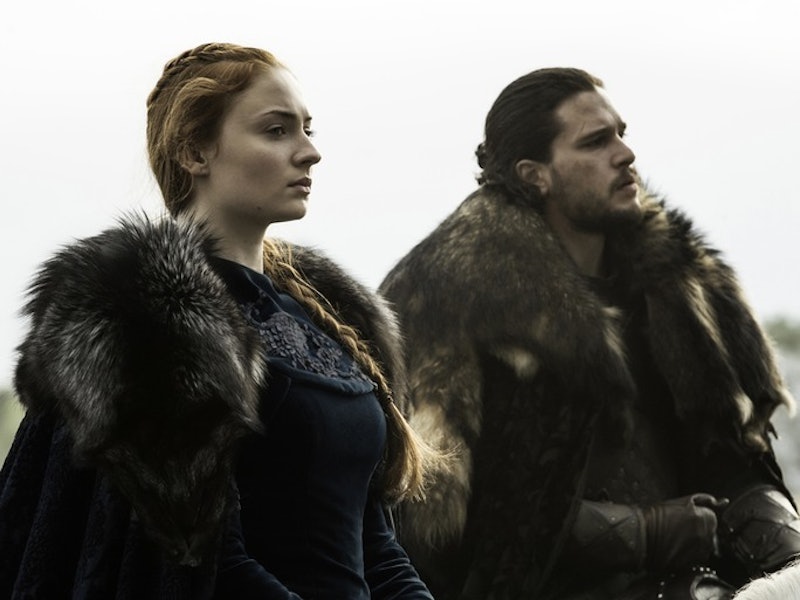 Let's get real for a moment: The Starks might be one of the weakest families in Westeros. As Game of Thrones gears up for its penultimate season, we have only just begun to get a taste for the treachery that lies buried at the core of each remaining Stark family members. Yes, Season 6 was (literally) transformative for all of them, as they each got one step closer to attaining their true destinies. But sooner or later, we all need to accept not only that will Jon not ascend to the Iron Throne, but also that he and his "siblings" (cousins) may be doomed to extinction by their poor alliances and late maturations. One of them is directly tied to the looming conflict that may destroy a large portion of the Westerosi population, another is in an alliance with a very, very shady dude, yet another is on a revenge quest (which could lead to dangerous tunnel vision), and the last might not be ready to rule in any capacity whatsoever because he doesn't entirely know what he stands for yet. They're all in pretty precarious positions, and that's why I can't support them as the series moves towards its end.

Let's start with the youngest remaining Stark. I'm still really raw about Bran's involvement in the death of Hodor. I may never get over it. But that's OK, because Bran might actually be the worst character on Game of Thrones. Not only can he go around and cause unwanted ripple effects in time, but he could also potentially be the reason the White Walkers break through the Wall and move south. He's nothing but a liability at this point; I'm surprised the snow hasn't turned him into a Stark popsicle yet. Bran is one of the most powerful people in Westeros right now, and he's floundering. There are hints he could bring down the Wall, but are there any benefits? I think not, and I thus cannot support this young man's quest.

Speaking of quests, it's hard to support Arya. Yes, being stranded in Braavos and relentlessly pursued/abused by The Waif is less than fun. But homegirl needs to realize that revenge is a false solution to her problems. Arya began as the tomboy of our dreams. She wanted to learn how to wield a sword, she shirked female beauty standards, and she chose her comrades wisely (albeit by necessity). But ever since she escaped King's Landing, she has relied heavily on the help, training, and kindness of others to survive. Arya is still, in many ways, a child. The fleeting relief that killing an enemy brings is a short-term solution I can't get behind, and that seems to be her sole motivation for the foreseeable future.

In many ways, Sansa is the feminist hero we all hoped she would become. At the end of Season 6, she is matured, hardened, intelligent and already strategizing in ways befitting a potential ruler. But Sansa's biggest weakness is still the ways in which she relates to the men in her life. She is has aligned with Littlefinger, one of the shadiest and creepiest men in the kingdom. She has strengthened her bond with Jon, but does she trust him? Don't families need to operate on complete trust in one another? Sansa may know how to strategize in wartime, but can she be just as capable or sharp when it comes to everyday life?

The biggest reason it is hard to support the Starks, though, lies in their inherent goodness. Yes, in many, many other worlds, goodness is better than evil. In the Game of Thrones world, the evil that many characters possess, leaving their noses less than clean at the end of the day, is a necessity. The moral compass of the Starks in a noble one, but when their opponents display the outright selfishness or cutthroat-ness that is necessary to play the titular game, it's hard to not feel sorry for them.

Their parents, by all accounts, raised them well. But their development into the kinds of people who could potentially survive and thrive in this world have come too late in the game. The "right" thing and the "smart" thing rarely intersect in Game of Thrones, yet the Starks have long conflated the two. Somehow, four of them have managed to survive this blunder and come out the other side a little wearier but intact. How is it possible that the Starks have arguably stumbled their way to the top of the food chain, despite their dwindled ranks?

From the mouths of babes (aka Kit Harington), it appears Season 7 is going to be a major doozy. I hope that means that the Starks get comeuppance for what they've enacted with their nobility blinders firmly strapped on. They've survived too long on some magically endless store of luck and goodwill, but it gets tough to support a family that refuses to be as ruthless as those who are willing to usurp their power. By the power of the Many-Faced God, Starks fam, get it together.