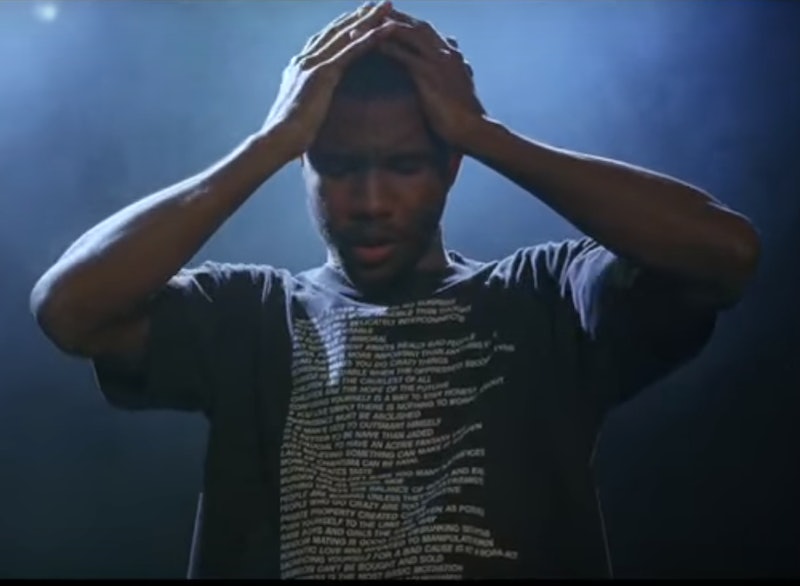 Like many fans, I'm sure, I haven't been able to get Frank Ocean's new album, Blonde , out of my head since it's release. Wonderfully introspective without feeling self-indulgent, deeply eclectic and full of the sort of artistic nuances that demand repeated listens, Blonde is nothing short of a triumph. Personally, I've poured over the lyrics of each song, song influences and marveled at the production work. But upon the very first listen of the album, there was one particular influence that was unmistakable. The influence of late singer-songwriter, Elliott Smith, is apparent all over Blonde , in both blatant tributes and subtle suggestions. Not only is Smith's musical legacy more than worthy of such appreciation, but it's also easy to understand why Ocean would be such a fan of his work. Creatively, the two hold some common ground.

A list of contributors for Blonde were mentioned in Ocean's 360-page magazine, Boy's Don't Cry, and, unsurprisingly, Smith joined a talented bevy of collaborators and album influences as diverse as Kanye West, David Bowie, and Brian Eno. Having been a massive fan of Smith since I was a teenager, the revelation that Ocean may also be a fan and inspired by his music was a deeply gratifying one.

Much like Ocean, Smith was something of an enigma. Though he's commonly described as being a singer-songwriter, his entire musical discography is slightly hard to define. It leaps from the deeply intimate, lo-fi, hushed confessionals of his earlier albums to being experimental, creatively unpredictable, and stunning on a large scale. When Smith died in 2003, the music industry rightfully mourned the loss of an artist who was truly unique. He was commended for being a breathtakingly honest, sonic genius, who had made an endless emotional impact on the lives of fans that remains to this day. (I still feel it, and clearly, so does Ocean).

Smith's influence can be heard almost instantly on Blonde. On second track, "Ivy," a sparkling, electric guitar provides a melody to Ocean's nostalgic, yearning lyricism. It's a stunning song, and one that bears uncanny similarities to Smith's "Waltz #1" from his fourth album, XO. Though Ocean's delivery is more musically stripped down and more vocally direct, the similarities are obvious and startling.

But the most obvious sign of Smith's influence can be found on the song, "Siegfried." At about the three minute mark, the song diverts to become something else entirely, with Ocean singing, "This is not my life, It’s just a fond farewell to a friend." The line is an exact lyric taken from Smith's "A Fond Farewell" of the album From A Basement On A Hill, and it's truly touching lyrical tribute. "Siegfried" also happens to share a great deal of lyrical themes with much of Smith's style. As Tom Hawking from Flavourwire noted in an article regarding Ocean's reference, many of Smith's songs (such as "Pictures Of Me" and "King's Crossing") are written introspectively, with the singer reflecting on himself from a third person perspective — as an image, or an actor, within his own life.

Ocean inhabits similar metaphysical space in "Siegfried," with the artist speaking about himself almost as though he is trapped in an echo, "dreaming a thought that could dream about a thought" and musing, "why not spend this flammable paper on the film that's my life?" Similarly, in "Pictures Of Me," Smith dissects a relationship from a distance, almost as though watching it on a screen, "Saw you and me on the coin-op TV/Frozen in fear every time we appear."

Both Ocean and Smith are also master storytellers. When Ocean told The Guardian back in 2012 that "storytelling" was just as, if not more important, than the actual music of a song, he wasn't kidding. Blonde is full of stories, with Ocean developing narratives lyrically, musically, via spoken word monologues, and even a guest appearance from his Mom, who offers some solid life advice.

Smith, too, was invested in stories. Many of his songs may come from a first person perspective, with many fans confusing the persona of his songs as reflecting the experiences of his own life. However, though he was clearly writing from a very real, emotional place, he had no interest in giving himself up completely to his music, the industry or his fans. As he told Uncut Magazine, in an interview published in 2000, "I don’t have any desire to try and put across my life to people."

Further along in the interview, Smith then rejects the idea of fame as an abstract one, and something that he was deeply uncomfortable with and that he felt was at odds with his own creativity:

There are certain things that I didn’t think would bother me but did, and now they don’t any more. Like lining up in situations that were more set up for someone who lives and breathes a the role of a star and always looks like one and always acts like one and projects this image at all times and expends mass energy doing all those things. And I just can’t do that. And I don’t even want to. It’s a lot more important to be thinking about a new song than to be thinking about what I’m wearing, y’know

Though Ocean is obviously far more comfortable in the public eye than Smith ever appeared to be, his absence from being a standard celebrity and being famous has been clear in the lead-up to the release of Blonde. Though fans and critics alike were clamoring for more information about when the album would drop and what it would sound like, Ocean remained private and strategic.

Instead of making talk show appearances hyping his new album, or reassuring fans on social media that it would be coming soon, he instead remained silent. He concentrated on his art. He then made and released Endless , a visual album that felt like the biggest thank you note to fans ever. It was also a stealthy reminder that the music industry didn't have him on a tight leash — he does his own thing and his own sound, and he does it on his own schedule.

Smith was never a big time singer. Though he eventually received mainstream success later in his career, you could tell that fame wasn't something that he especially craved. Instead, it was clear that, though he had nothing against sounding mainstream, he was simply invested in music and the art of storytelling. In an interview with Spin Magazine back in 1999, he laid these distinctions out perfectly by saying, "It's a big game to play, trying to make something that's mainstream enough and still human."

This is perhaps the balancing act that Ocean himself strived for in the process of creating Blonde, which is undoubtedly an album bursting with the sort of unfiltered vulnerability that you don't always get from mainstream music. At times it can be achingly raw, while still maintaining a sense of mainstream accessibility; he experiments with musical styles, emotions and lyrical stories whilst still grasping at his core, defined sound. As a result, Blonde feels so intimate and human that you can almost feel Ocean's breath against your neck when you listen to it through headphones. Like Smith, he played a big game. And you know what? I think he won.