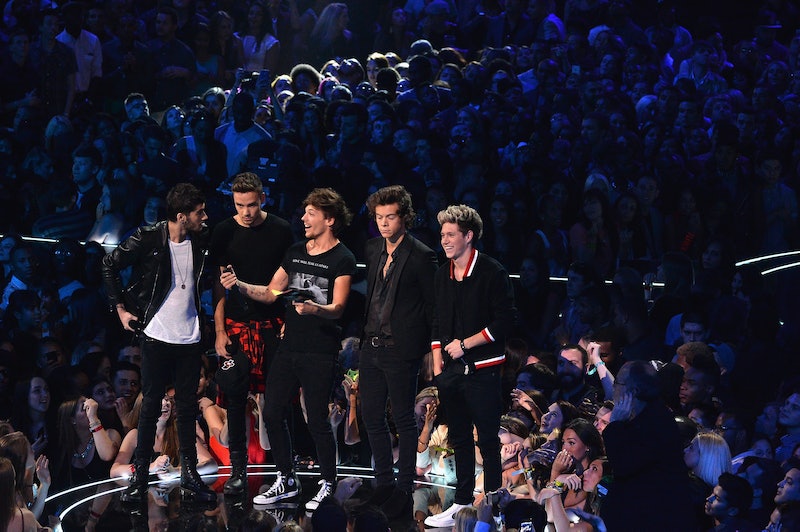 It has been a year since One Direction announced they'd be going on hiatus and a whole lot has happened since. Just a few months earlier, Zayn Malik shocked Directioners and non-fans alike when he decided to leave 1D, which ultimately led to his first album as a solo artist. Although each One Direction member has been busy pursuing their individual endeavors, they have remained fairly out of the limelight, at least compared to the hysteria that used to follow them collectively. Since Malik's video "Pillow Talk" was nominated for a VMA this year for visual effects, I wonder if he or any of the One Direction members will be at the 2016 VMAs.

The One Direction boys are no strangers to the VMAs, and they made their debut way back in 2012 when they were perfectly coiffed, baby-faced, and a lot less tattooed. Of course, they were all still in the same, active band, so appearances were a lot easier to organize. I wouldn't expect to see many 1D members at the VMAs this year, except maybe Malik, considering also that One Direction haven't been listed as presenters or performers, as of yet. At any rate, here is what each member is up to right now, so everyone can decide for themselves if there's even a chance at a red carpet reunion.

First things first: Harry Styles. He has been quite an enigma hasn't he? In March of this year, Styles signed on to act in Christopher Nolan's Dunkirk . There was a lot of mystery surrounding the film, but it was serious enough for Styles to cut off his infamously long hair, presumably for his role as a World War II soldier. There were photos of him filming throughout the summer, but his limited social media use has caused fans to worry about his whereabouts:

In early August, Styles was spotted riding a bike around London, but he's remained very quiet publicly, so it's safe to assume that he is enjoying his time away from the spotlight and will not be shmoozing on the VMAs red carpet.

Based on his most recent tweets and pap photos, Horan appears to still be in Los Angeles, where he bought a Hollywood Hills home. Horan also supported Demi Lovato and Nick Jonas' tour and has been watching UFC matches in Vegas, and he looks to be the one with the most down time at the moment, so a quick jaunt over to NYC for the VMAs might not be so far-fetched. Horan does like to have fun on a red carpet:

Louis Tomlinson has also been living in Los Angeles, where he is raising his baby boy, Freddie, with Briana Jungwirth. He has been spotted traveling with his current girlfriend Danielle Campbell and has been lucky enough to watch Hamilton in NYC, but he most recently shared on his Twitter that he is back across the Atlantic:

Liam Payne also remains a bit of a mystery as of late, and it seems like he has been shacked up with girlfriend Cheryl Fernandez-Versini. In mid-July, Payne announced that he signed a solo deal with Capitol Records, so this is likely be the project that will be taking up most of his time in the near future.

Malik, on the other hand, has been the most visible post-One Direction and released his solo album, Mind of Mine . His relationship with supermodel Gigi Hadid has encouraged more headlines than ever, and as a couple they have been very red carpet friendly, making a big appearance at this year's Met Gala.

As far as any One Direction members going to the 2016 VMAs, I would most likely count on Malik showing up with Gigi Hadid. If Directioners are feeling lucky, they can hope Horan would fly over for fun and join up with Malik on the VMAs carpet, much like Payne and Tomlinson did at the 2016 Brit Awards. Chances might be slim this time, but there is still hope for a 1D reunion in 2017!