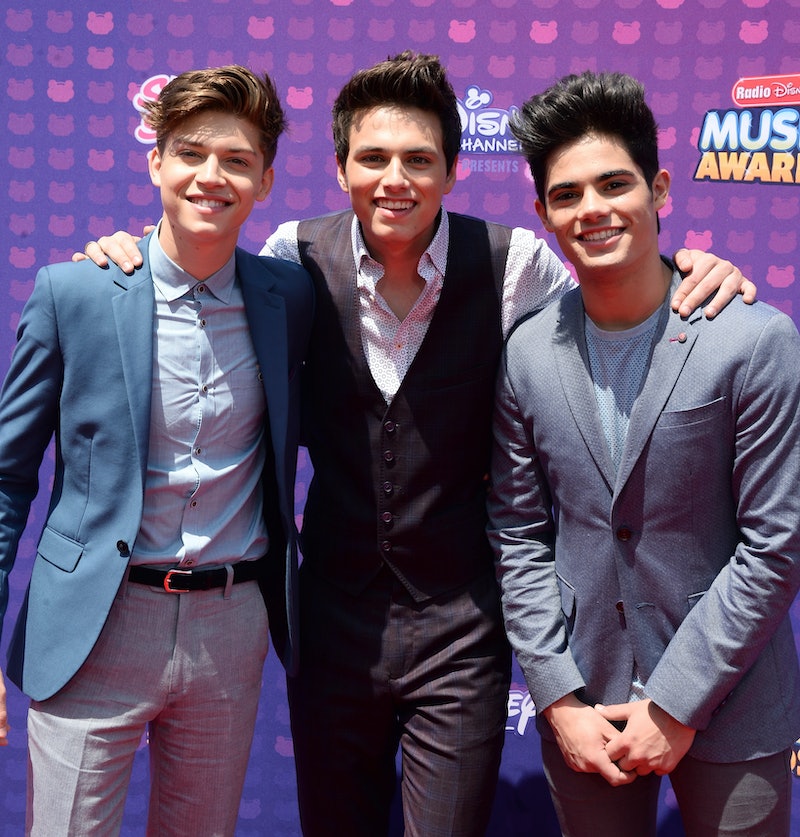 If you are bummed over the One Direction hiatus, I have some news that will perk you right up. According to Variety, Disney Channel's new project Forever Boys is a sitcom about a boy band made up entirely of vampires. You read that right, Disney latest show is about an eternally youthful boy band — also known as the best kind of boy band. The chances of these guys going on hiatus are slim. The band that is turned into vampires together stays together.

Forever Boys is set to star Forever In Your Mind, the up and coming band whose members are Disney favorites Ricky Garcia, Emery Kelly, and Liam Attridge. Disney fans will know Garcia from his regular role on Best Friends Whenever. Forever In Your Mind also sing the show's theme song. Earlier in Summer 2017 the guys contributed the "Disney Medley" to the popular Your Favorite Songs From 100 Disney Channel Original Movies album.

The band's brand recognition and addictive pop tunes make them prime candidates to be the next breakout boy band. Adding a beautifully silly sitcom plot to the mix is just an added bonus. Anyone who ever went through a Twilight phase or daydreamed about a Backstreet Boys movie based on the video for "Everybody" is sure to fall for a show about a vampiric boy band just trying to live their lives as normal teens.

By far, the best part of the premise is the part where the boys were turned during their first concert in 1957. After the whole being turned into vampires thing the guys disappeared from the limelight in order to live reclusive lives. It takes being rediscovered by a record producer in 2016 to bring the boys out of hiding.

If I could think up my dream idea for a sitcom that summary would be it. If the guys were teens in the '50s, their music will have to include a classic pop sensibility, and their lack of interaction with the modern world will no doubt lead to all sorts of wacky misunderstandings. Done right, this comedy could totally fit right in with '90s fair like Sabrina the Teenage Witch and Teen Angel.

Forever Boys comes with the added bonus of featuring a band of talented young artists who can produce all sorts of tie-in albums. The best kind of show is the kind that comes with built in merchandising for maximum obsessing potential. I not only want to watch the show, I want the album and the inevitable t-shirt to fully show off my vampire boy band devotion.

The pilot is set to start production in September 2016, and if Disney picks Forever Boys up to series (which, come on, Disney, the world needs this) you could be enjoying an undead boy band sitcom in 2017.