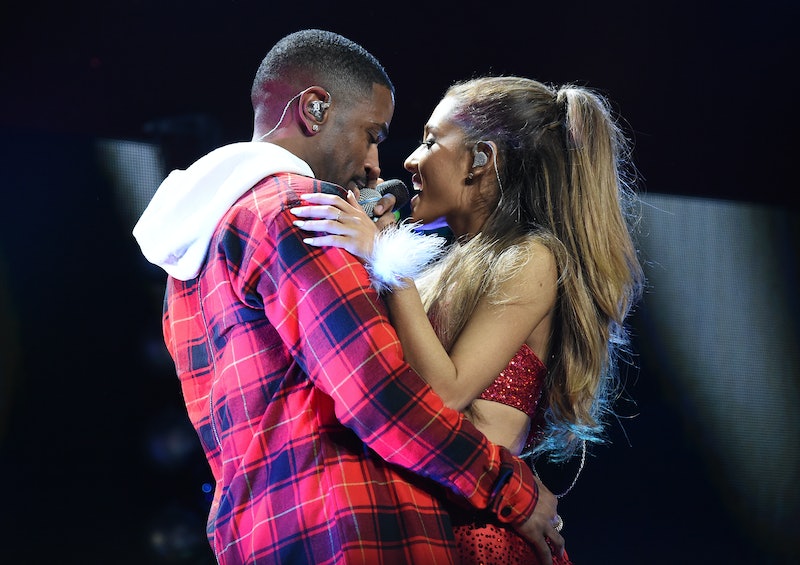 Ariana Grande's songs have been all over the radio, but her love life has also been making headlines lately. Since early last year (around the time of "doughnut-gate") Grande had been dating backup dancer Ricky Alvarez, but in mid-July news of their breakup came out. Fans we're upset, but it didn't seem like there was much bad blood between the former couple — at least not publicly. Within a few weeks of the news of their split, Grande was photographed kissing Mac Miller, who was her old friend and collaborator. Now that her private life is back in the limelight (with some PDA to match), I wonder: Who has Ariana Grande dated?

Before her relationship with Alvarez, Grande was perhaps most infamously known for her high profile relationship with rapper Big Sean. Grande and Big Sean worked together on the song "Right There" from her Yours Truly album, and performed it together often, so there does look to be a pattern in Grande's romantic preferences: dating people she works with. Considering she's a huge, global pop star, it's perhaps no surprise she enjoys being with someone who is at least somewhat connected to the business. Here are some of the guys Grande has dated over the years.

Grande and Phillips were co-stars in 13: The Musical way back in 2008 and began dating soon after. They were reportedly together for three years before splitting in 2011. They recently hung out this past July for a mini- 13 reunion and posted a photo together on Instagram, so no hard feelings!

So, it seems like she really does have a thing for backup dancers. Grande dated her Victorious dancer Viscomi after her breakup with Phillips in late 2011, according to Teen. She spoke to Just Jared in 2012 about a difficult breakup and based on the timing the quote may be about Viscomi: "We were filming one season and I went through this horrible, horrendous breakup. My heart was broken and shattered. I was crying through hair and makeup, like I couldn’t even pull myself together."

During the summer of 2012, Grande began a long-distance relationship with Australian comedian Jai Brooks. The two reportedly met when her mom showed her a video of him and his brothers, The Janoskians, and they finally met in December 2012 after a few months of video chatting and tweeting, dating until summer of 2013. They had a brief break in their relationship, but Jariana got back together in May 2014. And if their young love wasn't confusing enough, they broke up for the second time in July 2014.

Following her break up with Brooks in the summer of 2013, rumors of Grande dating Nathan Sykes emerged. The two met during the filming of the music video for "Almost Is Never Enough," and Sykes confirmed they he and Grande were dating via Twitter in September 2013. The romance was short lived and in a radio interview in January 2014, Grande confirmed the end of her and Sykes' relationship, but insisted that were were still great friends.

Big Sean collaborated with Grande on music first before anything romantic happened. In 2013, she worked with him on "Right There," and they were said to have hit it off on the love front after working on her song, "Best Mistake." The couple showed their first PDA during the MTV VMAs in August 2014, but the romance was brief. They announced their amicable split in April 2015, but since then, Grande told V Magazine of Big Sean and their breakup, "It also wasn't that hard for me, because we were friends. So it's chill."

After her very public break up with Big Sean, Grande was soon spotted with Ricky Alvarez. Alvarez was a dancer who joined her on the Honeymoon Tour throughout most of 2015. Their relationship became infamous as Alvarez was with her during her "doughnut licking" debacle, and they were always very open via their social media. After a year of dating, Alvarez and Grande broke up in July 2016 with a source telling E! News that they were still friends.

Grande and Miller were first rumored to have had a fling back when they recorded their duet "The Way." While their kiss in the video for the song raised some eyebrows, they insisted they were very good friends and, well, after a few years, it looks like the friends are trying it out romantically. After being spotted traveling together over the month of August, the were caught in a PDA moment at a sushi restaurant, so Miller might just be the latest love in her life.

Grande has a taste for those in the music business, and I can't say I blame her. She's young and doing her thing.

More like this
Is Megan Fox Pregnant? MGK Gave A Shout-Out To Their “Unborn Child” Onstage
By Hugh McIntyre
Tulisa From N-Dubz Has Worked With Some Unexpected Musicians
By Maxine Harrison
Joe Alwyn Reacts To Taylor Swift Earning An NYU Doctorate In A Rare Interview
By Jake Viswanath and Nicole Pomarico
Harry Styles Addresses The Theory That His New Song "Daylight" Is About Taylor Swift
By Jake Viswanath
Get Even More From Bustle — Sign Up For The Newsletter