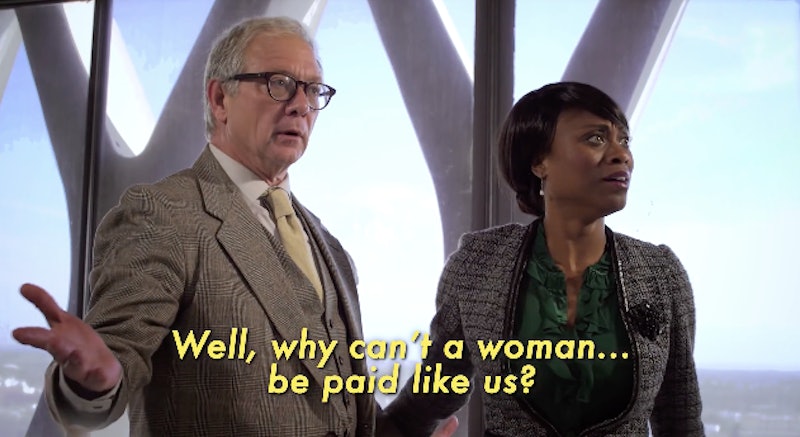 Why can't a woman be paid like a man? This is the central question in a new satirical music video "My Unfairly Paid Lady." And in a musical or outside of one, it remains a very good question.

Although people disagree over the best way to crunch the numbers, and although different people come up with different estimates for how big the gender pay gap truly is, it's clear that women do make less money than men. It gets even worse for women of color, too. And this gender pay gap likely isn't going away any time soon.

But even though there are all sorts of complicated factors that contribute to the pay gap, overall, it adds up to the simple fact that our culture doesn't value women's work as much as it does men's — even if they're both performing the exact same duties. But what if we changed that? What if we instead decided simply to pay women the same amount we pay men? It sounds so easy when you put it like that, doesn't it?

That's where the musical parody video "My Unfairly Paid Lady" — a play on the classic title My Fair Lady — from Make It Work comes in. In it, we meet Lisa, who has just been hired at her new job — the only catch being that the two men who hired her, Henry Higgins and Peter Pickering, aren't going to pay her the same amount that they paid the last person who hired for the job. It will not surprise you to find that this person was a white man. And that 40 percent less they're paying her? Is sadly pretty much standard for black women.

But instead of dismissing her concerns, our Henry Higgins borrows a tune from My Fair Lady (name “A Hymn to Him”) and asks a question that we all should as a lot more often:

Maybe if we all keep asking that question enough, it might finally sink in.

More like this
25 Quotes About Love To Share During Pride Month 2022
By Madeleine Aggeler and Emma Garza
What The History Of Pride Month Means For Celebrations Today
By Jay Polish
TikTok Is Using A Kendrick Lamar Song To Post Thirst Traps
By Courtney Young
Is TikTok’s “Villain Era” Trend Just An Excuse For Bad Behaviour?
By Chanté Joseph
Get Even More From Bustle — Sign Up For The Newsletter