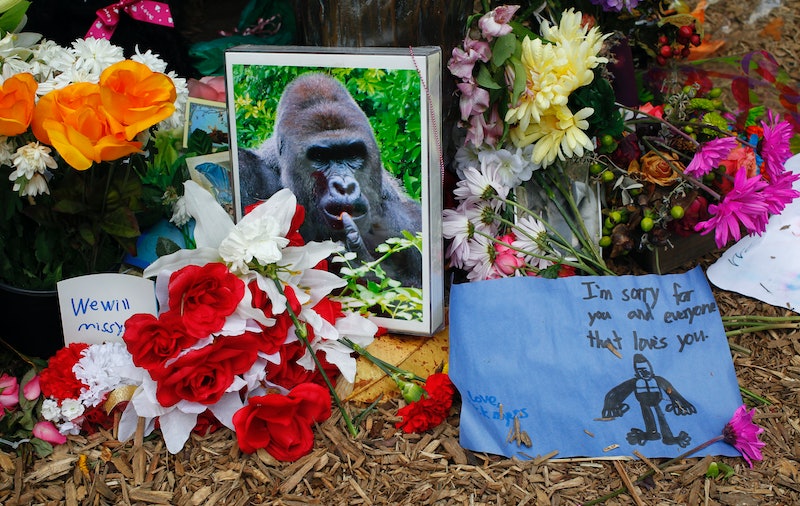 It has been nearly three months since the tragic and controversial killing of a western lowland gorilla at the Cincinnati Zoo, but for many supporters, the memory of Harambe has not faded one bit. After he was shot by zoo employees who were trying to save a young boy, Harambe transformed from king of the ape enclosure to king of the internet. Soon, that reign could even extend to the world of Pokémon Go as there's actually a new Change.org petition to make Harambe a Pokémon.

By now, you're probably well aware of the Harambe craze, but here's a recap: The male gorilla was shot dead in May after a young boy fell into the Cincinnati Zoo's gorilla enclosure. Harambe had physically dragged the toddler, causing employees and onlookers to grow concerned. Ultimately, the zoo's employees shot Harambe in order for them to safely retrieve the boy.

Harambe's death left much of the public divided. Although a child's life was possibly in danger, many opposed to the decision wondered why zoo employees felt it was necessary to use lethal force. After all, gorillas like Harambe are critically endangered, as are many of their fellow gorilla species.

In the weeks and months following Harambe's death, the gorilla hasn't left the spotlight for very long. Recently, memes of Harambe have popped up online, many of which appear to be making light of the situation. And, of course, there's also that real petition to incorporate Harambe into Pokémon Go.

The petition was posted on Change.org, the popular online petition platform with more than 100 million people and 100,000 organizations engaged. The petition is called "Make Harambe a Pokémon" and it had just over 100,000 supporters as of Wednesday, which is about two-thirds of the way to its 150,000-supporter goal. "Make Harambe a Pokémon" keeps its ask simple, saying, "Harambe deserves to live on forever in our hearts. Support this petition if you want Harambe to become a Pokémon." According to the petition page, the petition will be presented to Nintendo and the Pokémon Company upon reaching its goal. Should the creators of Pokémon Go decide to insert a Harambe-inspired character, they could find the sample images provided by the petition helpful.

Unfortunately, the petition could be just another form of lighthearted joking in response to Harambe's death. After Harambe memes grew popular, the Cincinnati Zoo publicly condemned any material that makes light of the tragic situation. Earlier this week, for instance, zoo director Thane Maynard told the Associated Press, "We are not amused by the memes, petitions, and signs about Harambe."

Amused or not, the zoo probably hasn't heard the last of the Harambe talk. It seems unlikely that Pokémon Go would include itself in the drama by including a Harambe character, but the conversation around the famed gorilla doesn't appear to be slowing down at all on social media. If any of the chatter raises awareness of the need for conservation efforts, then it's safe to say that Harambe has left behind a meaningful legacy.

More like this
TikTok's Model Walk Challenge Turns The Treadmill Into Your Runway
By Carolyn Steber
The Best Memes & Tweets From The 2022 Met Gala
By Olivia Rose Ferreiro
8 TikTok Pasta Recipes To Try Out At Home
By Emma Garza
On TikTok, Miley Cyrus’ “Malibu” Is The Soundtrack Of Growth
By Courtney Young
Get Even More From Bustle — Sign Up For The Newsletter