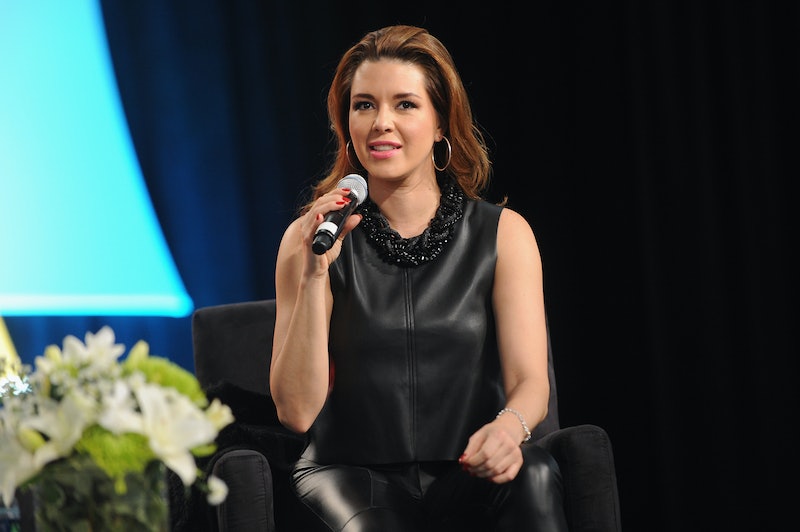 Alicia Machado, the winner of the Miss Universe crown in 1996, has become an American citizen. Normally, this wouldn't be newsworthy — in 2014, an average of 1,800 immigrants were naturalized each day, according to a statistic from U.S. Citizenship and Immigration Services. However, Machado's decision to become a citizen was partially influenced by her former boss — and current Republican presidential nominee — Donald Trump.

Although Trump has previously claimed to "cherish women" and "love Hispanics!", his polling numbers — and, of course, statements he's made about both demographics in the past — suggest the feeling isn't mutual. Although Trump has made sexist comments about a number of high-profile women, including his opponent, he typically refers to Latinos as a mass — or more aptly, as a threatening horde: in 2015, for example, he infamously referred to Mexican immigrants as "rapists."

As a Latina woman, Machado has had to deal with a double whammy of bigotry from Trump. She won the coveted pageant title in 1996, the same year Trump purchased Miss Universe Inc., and it didn't take long for him to start body-shaming the beauty queen. "I could see Alicia Machado, the current Miss Universe, sitting there plumply," he wrote in his 1997 book Trump: The Art of the Comeback. Machado later claimed that Trump called her "Miss Piggy" because of her weight, as well as "Miss Housekeeping" because of her Venezuelan accent.

Like many U.S.-based Latinos, Machado is using her vote to take a stand against what she sees as Trump's xenophobia. Many of these Latinos are first-time voters. In fact, many are recently-naturalized citizens who did not feel compelled to vote until they were confronted with Trump's bigotry. As of May 2016, citizenship applications were up 12.8 percent over the same period last year — some experts believe this spike in naturalization is directly related to Latino immigrants' fear of a Trump win in November.

"I wasn't very interested before in becoming a citizen because we weren't too worried about anything," Jose Lovos, a Salvadoran immigrant who has lived in the U.S. for 20 years, told NPR. "But now there's all this rhetoric about deporting 11 million undocumented people."

For many Latino immigrants, becoming a citizen is a way of protecting other immigrants whose immigration status prevents them from voting (and, in many cases, from living comfortably in the United States).

"We want to help elect a good president for people in this country who don't have a voice or a vote," Lovos said. "I want to become a citizen to help other people, because other people have done it for me in the past. Citizens are the people who have power to make change."

My mother has lived in the U.S. since 1999, but only became a citizen in 2015. She had been eligible for citizenship for years, but had never been presented with such perfect timing. Her residency was about to expire, leaving her with two options: renew her green card and permanent resident status, or become a citizen. Permanent residents have many of the same rights and responsibilities as citizens — they are able to legally live and work in the U.S., and are required to pay taxes — but they can't vote. For her, the choice was simple: she is now both a U.S. citizen and a registered voter.

In addition to encouraging permanent residents to become citizens, Trump's candidacy is also correlated with an uptick in Latino voter registration.

"A surge in Latino engagement is coming," Ben Monterroso, executive director of nonpartisan group Mi Familia Vota, told The Washington Post. "Unsolicited people tell you that 'I'm becoming a citizen because I want to vote against Donald Trump' or 'I want to vote against the attacks on our community.'"

A Trump presidency could be disastrous for the millions of Latinos living in the U.S., especially for the undocumented immigrants Trump wants to deport en masse. Latinos are a mixed bunch, politically, racially, and culturally — referring to them as a single electorate erases the diversity of the U.S. Latin population — yet many have found a common enemy in Trump, and they're making their voices heard.