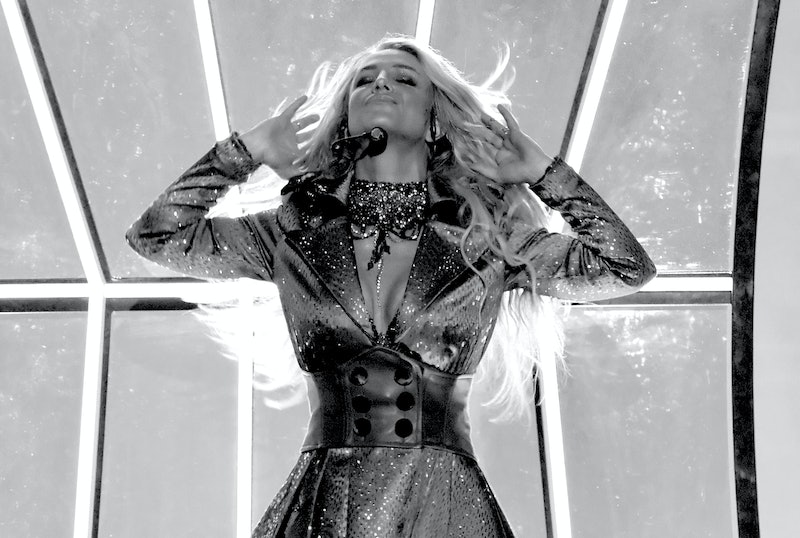 The wait for a new Britney Spears album has ended with the masterpiece that is Glory. The album combines everything you love about classic Britney with a mature, adult edge to better suit your 2016 musical palate. The best example of the new sound can be found in lyrics for Spears' "Just Like Me." Anyone who has ever been cheated on will immediately feel the emotional punch "Just Like Me" packs.

"Just Like Me" is not her' first breakup song. Way back in her 1999 debut album, ...Baby One More Time, a young Spears helped teens everywhere through their first breakups with the innocent pain of "From the Bottom of My Broken Heart." As the years passed, Spears' breakup songs became deeper and focused on recovering from a broken heart with a girl power roar '90s kids could relate to — what is "Stronger" if not an anthem to realizing your full potential after ditching the person dragging you down?

In "Just Like Me," Spears takes a more immediate approach to not only heartbreak, but to being cheated on. The lyrics are direct and brutal, with all the pain right there on the surface. This is her speaking to everyone who has felt the sting of seeing someone you love with someone else and saying all those raw emotions you are feeling are natural even though they hurt.

Look at the opening, where she sings about the anticipation of going home to be with the person she loves.

Just the idea of having no clue what is waiting for you when you get home, hits hard. Spears layers the intro with excitement: she's been at a gig, working her butt off, and she is coming home to find the person she loves in bed with a woman who looks just like her. Even if your cheating experience wasn't quite so dramatic, the lyrics are sure to bring back memories of discovering your significant other's betrayal. The sensation is painful, but this is Spears, and she is not going to let anything keep her down for long.

Before I think, I start to runBut you can't even face meKnow exactly what you've doneKnow exactly, baby

This verse balances shock and anger perfectly. Being cheated on can send you on a downward spiral. There's a desire to blame yourself, to feel like you weren't enough, and a whole host of other negative feelings. In so many ways, "Just Like Me" is an empowering song to listen to if you are grappling with your significant other breaking your trust in such a painful manner. Spears isn't just saying she's been there; she's saying blaming yourself is not the answer.

Then comes the whammy verse, the one you need to hold onto whether you were cheated on in the past or recently. This is a grownup Spears moving on defiantly and without regret.

When you put so much work into a relationship and get nothing but heartbreak in return, it is better to let it go. Spears doesn't sound bitter here, just resolved. Letting the other person go won't make the pain go away all at once, but it will put you on the right path. I am sure there are plenty of Spears fans out there who have put toxic relationships behind them who heard this refrain and cheered.

The song ends on a solemn note with the singer reiterating she can't believe "she looks just me," but it is just one more sign of her growth. Being cheated on stays with a person, and though you can't erase the experience, you can move forward. Spears knows it, and, deep down, so do you.