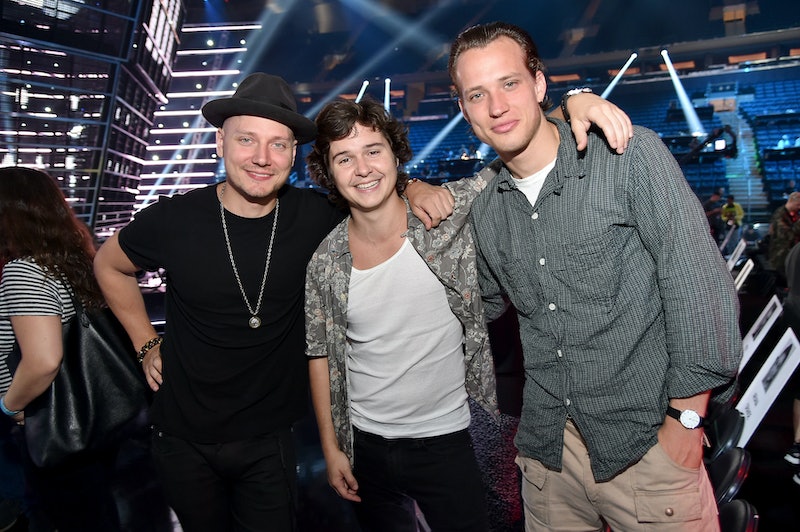 On Thursday, Aug. 25, the MTV Video Music Awards invited me and some other lucky reporters to take a look behind-the-scenes of the show before its premiere on Sunday. And while the guests weren't there yet, one nominee was in attendance. I got to speak with VMAs pre-show performers, Lukas Graham, who are also nominated for Best New Artist. First thing you should know about these Danish dudes? They're incredibly down-to-earth and their humble excitement over being honored at the VMAs is positively contagious. Basically, they're exactly the kind of band you want kicking off a show that's known for its brimming energy.

"It's really, really crazy," the band tells me about what it feels like to be nominated and if they anticipated it. "I mean, of course we know that '7 Years' was an extremely successful song, and we played a big tour and everything, but the fact that we're actually here, in Madison Square Garden, with all these amazing artists, it's... very weird."

The nomination and performance are not something that they're taking lightly. Rest assured that these guys are going to do the pre-show justice, because they're in disbelief that they get the chance to be a part of it all.

I also asked if the group had any pre-show rituals, being that they're in the midst of prepping for their big performance, but they didn't seem to sweat it. The guys explain that they typically "huddle up," but because it's an award show, they'll most likely skip that and will probably "have a few drinks" instead. They say of award show performances, "When you only have to do one song, it's weird huddling up, preparing." For them, this time it's a matter of just biting the bullet and getting it done. Lead singer Lukas Forchhammer says, "You need to go on, 120 [percent]." Stage fright definitely doesn't seem to be an issue here, regardless of the awe they're in about their involvement with the VMAs. They've got this covered.

Sometimes though, words fail. Rather than have the guys try to explain what seems to be an unfathomably awesome opportunity, I had them sum up what it feels like to get to perform at the VMAs in three emoji. Because, let's be real, it's the language we all best understand nowadays, anyway. The band's emoji assessment about being immortalized in VMAs pre-show glory? "The blessed hands, the smiling sun, and the thumbs up."

Sure, Lukas Graham may feel #blessed to sing their hearts out at VMAs and potentially win a Moon Man, but honestly, we should feel #blessed to have a band so amped about the experience that they'll no doubt turn out a stellar, memorable performance.