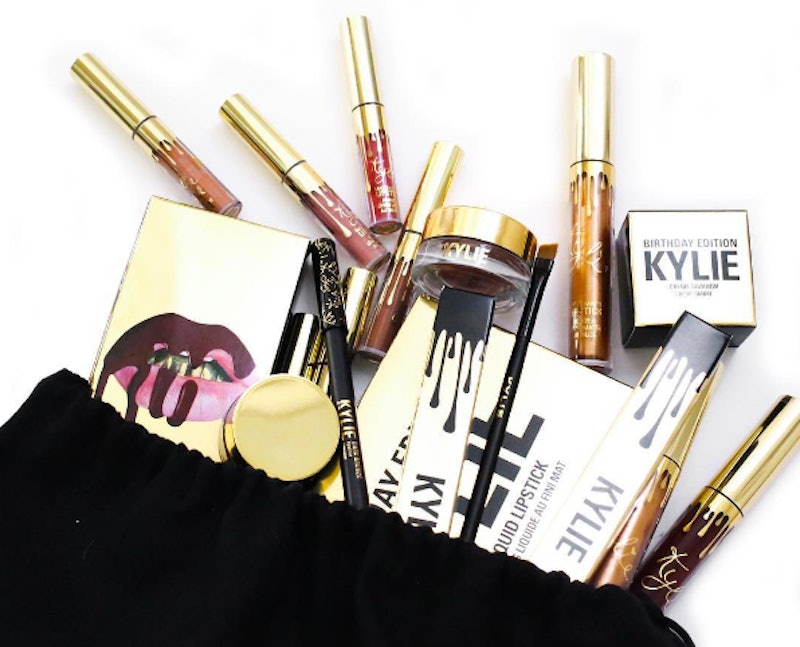 Stop what you're doing, because the Internet is freaking out over this Kylie Cosmetics hint. Due to Kylie Jenner's cryptic tweets, rumors are flying that the Kylie Cosmetics Birthday Edition collection could possibly make a comeback. Fans are losing it over the possibility, and it's for a pretty good reason.

You never really know what Jenner will do next, but one thing is for sure — she loves giving her fans what they want. She's famous for creating Lip Kit colors based on Twitter polls and listening to fan feedback, so I can only hope that this time is the same. A fan tweeted her saying "I wish you would bring back the birthday collection," and Jenner replied by tweeting with the thinking face emoji back at her. I take that as a sign that the makeup mogul is at least considering bringing these fan favorite products back.

Considering the Birthday Collection was only around for a few weeks and sold out crazy fast every single time, this would be major for makeup lovers. Tons of fans complained about not being able to get what they wanted when the collection went live. It wouldn't surprise me too much if Jenner saw those tweets and is taking them into consideration. After all, she did up the Lip Kit stocks after hearing that her fans were unhappy about missing out on their coveted shades.

The eight-piece set, which was sold both separately and together as a collection, was the site's best limited edition launch so far. There have been some limited edition Lip Kits out as well, many of which eventually were eventually restocked at least once *insert thinking-face emoji here.*

Even just this one emoji reply has gotten Kylie Cosmetics fans super excited. Here are some of the reactions that prove just how pumped her customers would be if the Birthday Edition did return.

Pikachu wants it back.

Even non-makeup lovers need the collection in their life.

Probs the exact face she was making when she tweeted this.

More like this
The Best Beauty Looks Spotted At Paris Couture Week 2023
By Audrey Noble
15 Modernized '60s Makeup Looks & Hairstyles That Feel Wonderfully Retro
By Olivia Rose Rushing
J.Lo's Micro-French Manicure Has A Fun, Sparkly Twist
By Olivia Rose Rushing
11 Stunning Critics' Choice Awards Beauty Moments
By Audrey Noble
Get Even More From Bustle — Sign Up For The Newsletter
From hair trends to relationship advice, our daily newsletter has everything you need to sound like a person who’s on TikTok, even if you aren’t.