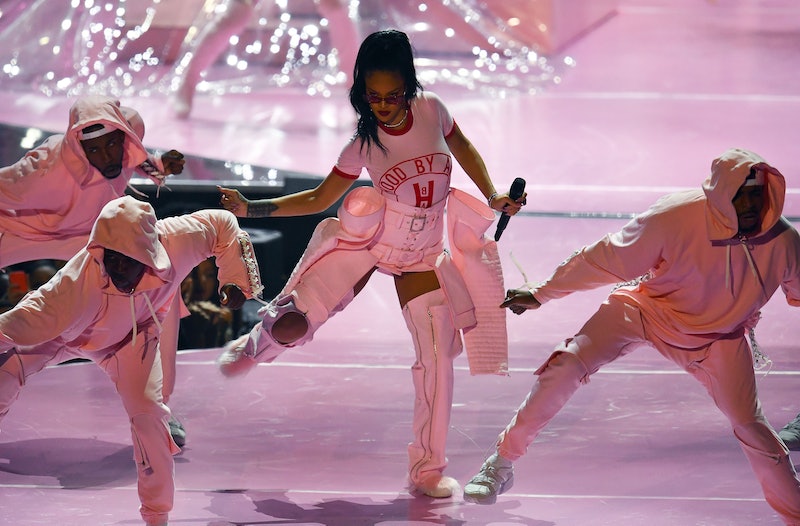 If ever there was a person who was born to make you scream, "YASS QUEEN," that person is — well, Beyoncé, but Rihanna is a close second. (And Nicki Minaj forms the trifecta.) This was thoroughly proven during Rihanna's 2016 VMAs performance, during the ceremony at which the singer was slated to receive the Michael Jackson Video Vanguard Award for the way she shuts down pop music every time she drops a track. Fresh off her latest album, Anti, Rihanna is the kind of person who has been through so many transformations over the course of her music career that she's picked up and lost fans basically every year without compromising a single inch of who she is. It was the same way with her performance, which was a total show-stopper.

Rihanna opened the 2016 Video Music Awards in style, taking to the stage with backup dancers decked out in pink, or white under pink lights, or both. I'm not entirely sure, because my mind was blown.. Either way, she was wearing a jersey and a jacket-harness sort of number, and that's about all I could pay attention to besides her amazing dance moves. She performed a medley of her hits: "Don't Stop The Music," "Only Girl (In The World)," "We Found Love," and "Where Have You Been."

Surprisingly (or unsurprisingly given it was not to be her only performance of the night), she didn't perform any of her Anti hits to open the show, which is sad because "B*tch Better Have My Money" is my favorite. However, she did thoroughly prove that there's no such thing as a bad Rihanna performance.

Update: Rihanna continued with more performances throughout the night, including her second, which had her performing "Rude Boy," "What's My Name?" and "Work" while surrounded by a mountain of dancers.

Update: Her next performance of the night saw Rihanna performing "Needed Me" from Anti while wearing all black like the absolute boss that she was. This was followed by a rendition of "Pour It Up" that was about 10 times better than simply listening to it on the album because it featured back up dancers, a psychedelic screen, and colored smoke hiding her feet from view. And, finally, she performed "B*tch Better Have My Money," because clearly she heard me complaining about her not performing it earlier.

Update: Rihanna closed the show with a gorgeous rendition of "Stay," "Diamonds," and "Love On The Brain" in a robe-like gown that made her look like a queen, and with an award in her hand that was presented to her by none other than Drake. (As it damn well should be.) The rapper wasn't kidding when he said that Rihanna succeeds by being nobody else but herself. It just so happens that herself is amazing.

If you can pick your jaw up off the floor long enough to get through the rest of the show — including three more Rihanna performances, according to the MTV broadcast — then you're doing a better job of holding onto your sh*t than I am. My chill is lost you guys, and it is all Rihanna's fault.