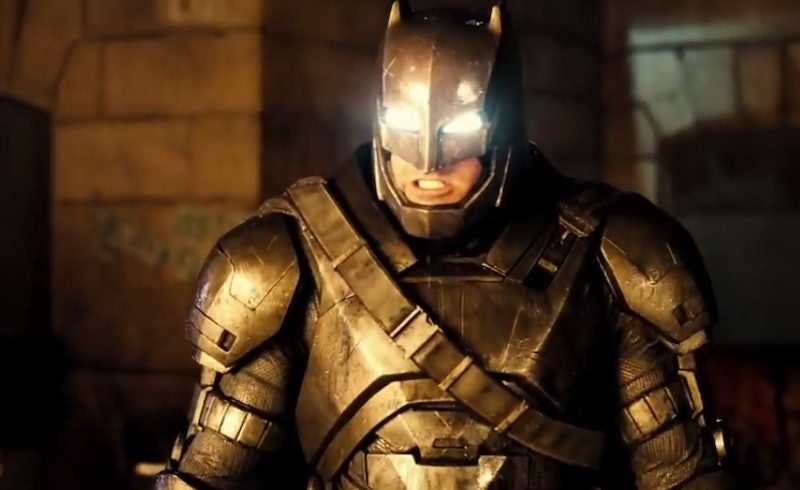 Unless you've been hiding away in a bat cave somewhere, you're probably aware that Ben Affleck is directing a new Batman movie. Though I guess, if you were in a bat cave, you'd probably have a bunch of TV screens showcasing the world, so you'd also be aware of the villain Affleck shared via his Twitter, Deathstroke. On Monday morning Affleck, who is starring and directing in the new standalone Batman movie, shared a short clip of the villain walking towards the camera and looking all sorts of intimidating. But who is Deathstroke in the DC universe?

According to the DC Comics website, we first met Deathstroke in 1980 in The New Teen Titans #2. He is a mercenary whose alignment is "complicated." Deathstroke aka Slade Wilson started out as a military guy working for the good guys, special ops unit Team 7. The military outfitted him with enhanced speed, strength and intelligence — essentially making him the toughest assassin out there. However, when Team 7 disbanded, Wilson went rogue out of pure saltiness. He became a mercenary-for-hire and had no qualms helping out the bad guys, soon becoming very popular for being the guy who can get any job done, no matter how tough or evil.

Deathstroke also appears in the CW series, Arrow as a nemesis to Oliver Queen aka Green Arrow. In this version, the two (both normal guys, neither enhanced) were working together on a special mission to break into an airfield when Slade was severely injured by some bad guys on the hunt for a venom-like substance called Mirakuru. It gives the recipient super-strength.

To save Slade, Queen gave him the venom, but the cost was Slade's sanity. After he lost his mind, and then Queen failed to save both their loves, Slade became the evil Deathstroke. He would stop at nothing to destroy Queen and his family. Eventually, he was captured and quarantined on the same island where everything went down in the first place.

I'm not confident that Deathstroke is the villain of this new Batman — specifically because it seems that more and more villains are kept secret until the movie is released like in Star Trek Into Darkness or even at the end of the movie like with Talia al Ghul/Miranda Tate in The Dark Knight Rises. I don't buy that Affleck would let us get off that easily. Maybe Deathstroke instead is on the good guys side? He is a mercenary, and who's to say he isn't being paid well by the good guys?

I guess we'll have to wait and see what Affleck does with Deathstroke. I know, I know. I hate waiting too. Life while waiting for superhero movies to reveal themselves is rough. But together, we'll get through it. The help of a few teases like this one every once in awhile won't hurt either.