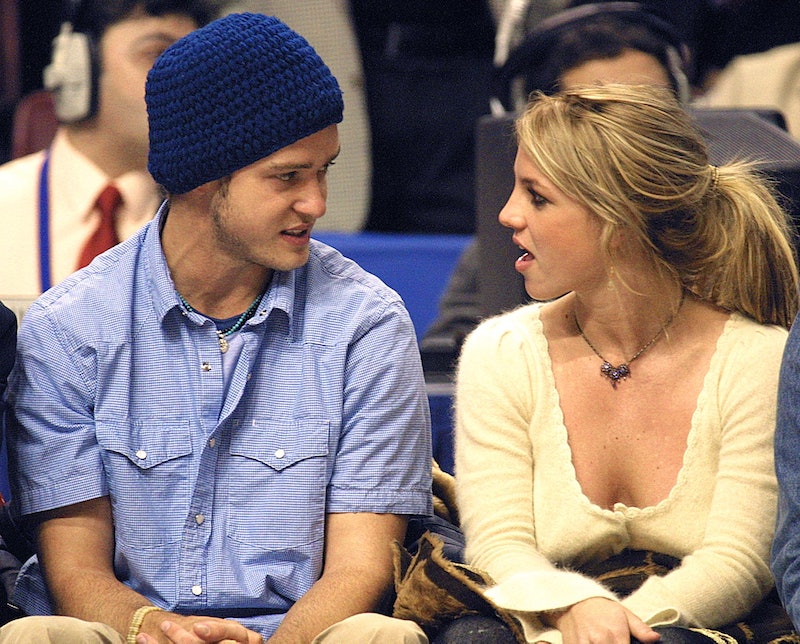 Believe it or not, there are still some people in the world that aren't over the '90s and '00s golden couple, Britney Spears and Justin Timberlake. While I'm not one of those people per se, I got really excited upon hearing that Spears wants to collaborate with Timberlake musically. In an interview with Most Requested Live with Romeo, Spears listed several people she'd love to work with, including Aerosmith, Gwen Stefani, and, you guessed it, Justin Timberlake. While the exes haven't always been on friendly terms in the past, Spears showed that she is ready to make up and collaborate with the fellow singer, saying "Justin Timberlake is very good." By including her ex in the list of musicians she'd love to work with, the Glory singer proved that she's in a great place in her life right now, which is why a Spears and Timberlake collaboration has to happen. Musically, they're both ready for it.

With the recent smash-hit "Can't Stop The Feeling!," Timberlake proved that he's in an upbeat and positive phase of his career right now. Taken from his upcoming movie Trolls, "Can't Stop The Feeling!" is a feel-good summer anthem, complete with a dance routine and the catchiest chorus of all time. This fits nicely with Spears's new album Glory, which includes pop songs, dance hits, and an altogether positive vibe.

The Mickey Mouse Club aside, musically, Timberlake and Spears have never been sounded so similar before. While both have experimented with different styles and genres of music, it finally feels as if they could be in the same place at the same time, and that's exciting. While a collaboration between the pair might never happen, they're both in a happier and more comfortable sounding place right now, in which a duet is more viable than it may have been previously.

With her ninth album, Glory , Spears has shown that she's ready to have fun, embrace who she is, and stop trying to be anybody else. Empowering songs like "Make Me..." and "Do You Wanna Come Over?" show that the singer has found her fun side again, and wants to create music that people can sing along and dance to, that explores her personal life and sexuality. "Do You Wanna Come Over?" in particular shows that Spears is capable of collaborating — the track is produced and co-written by Swedish duo Mattman & Robin and features shouty guest vocals.

Album track "If I'm Dancing," co-written by singer Chantal Kreviazuk, is incredibly catchy, and marks a real departure for Spears. By utilizing samples, layering beats, and featuring multiple voices, "If I'm Dancing" is so interesting to listen to because there's a lot going on in the song. Much like Timberlake's "Can't Stop The Feeling!," the Glory track is upbeat, positive, and it feels as though the artist has finally found the direction her career should be going with.

I'd love to hear a collaboration between the former exes, and, if Spears is ready to bury the hatchet, what better way than by recording a surprise duet together? Now all we need to do is play Glory to Timberlake and get him on board.