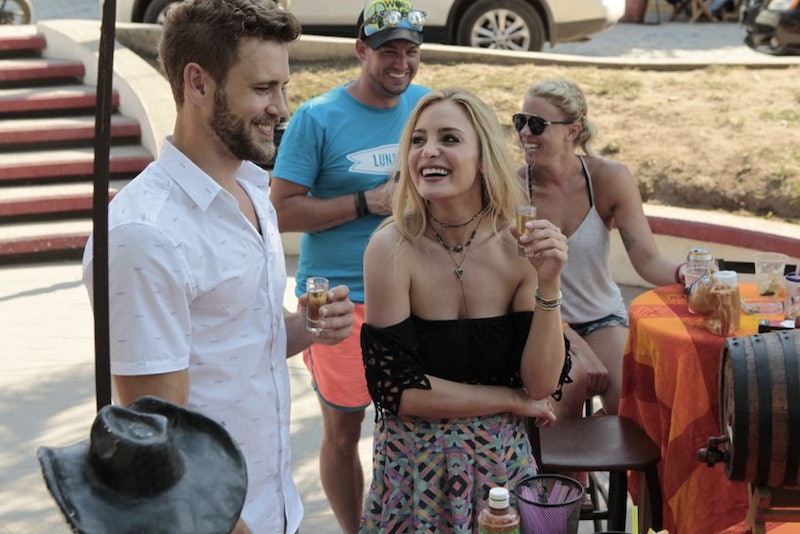 Nick Viall, who was recently named the next Bachelor, has become the voice of reason on Bachelor in Paradise. It is a far cry from the villain character he was sometimes seen as during his first two seasons on The Bachelorette, but I'm all about it. Whenever I watch Bachelor in Paradise , I feel like Nick Viall is saying what us fans are all thinking. In all honesty, I have always been pro-Nick, but I think that even the original haters can admit that Nick's BiP commentary is almost always on point.

He says what fans are all feeling when we watch the show from our couch at home or when we post our thoughts on Twitter. I'm not sure if it's because Nick is older than some of the other contestants and has more wisdom, or maybe he's just pulling from his familiarity with reality TV dating to make his observations. Whatever the reason, Nick actually understands how this show works and how the viewers feel better than anyone else.

He should really be one of the hosts on After Paradise. He would be hilarious, smart, and very accurate with anything he had to say about the antics that go down on each episode. Nick really gets it when it comes to understanding how Bachelor Nation feels about BiP's most important moments.

1. When He Thought Josh Wanted To Kill Him

When Josh Murray went on an angry tirade against the entire house and asked if people thought he was genuine, Nick spoke up and said, "Ill be honest. I'll speak for myself. I don't know." This scene was a terrible look for Josh, and Nick said what we were all thinking when he declared, "All that he wanted to do was just murder me."

2. When He Jokingly Threatened To Come For Chris Harrison

As the host in the franchise, Chris Harrison has presented some twists and date cards that I did not agree with. As someone who's been involved with reality TV dating for three seasons, it only makes sense for Nick to feel this way every once in a while.

3. When He Questioned Josh's Intentions

What is up with Josh and all the mixed metaphors and long speeches? I have to admit that I do think Josh is sincerely into Amanda, but all of the words that come out of his mouth are just ridiculous. Nick was not the only one thinking that. We all were.

4. When He Didn't Know What To Make Of Ashley Going Out With Daniel

I had no idea if Ashley going on a date with Daniel was going to be a case of opposites attract or a complete disaster, and apparently Nick felt the same way. Daniel is the most hilarious person on the show and Ashley takes the quest for love very seriously, so there was just a lot of conflicting stuff going on here.

5. When He Talked About Getting Dumped

Most of us can't relate to getting broken up with in front of millions of viewers, but Nick does make sense. Just because you go through a terrible breakup that everyone knows about, it doesn't mean that you just have to pick yourself up right away and recover. It's totally valid to feel upset when you get hurt.

6. When He Commented On Josh & Amanda's Constant Making Out

Clearly, there's a ton of chemistry between Josh and Amanda, but it was kind of hard to see where the deep connection comes from. The show can't possibly fit in all of the Josh and Amanda footage into the show, but it really seemed like they were just making out for weeks on end. It was way too much to be around as I watched from my couch, so I can't imagine how the other cast members felt.

7. When He Joked About Laying Around With Daniel

I'm sure it's super hot at the resort where BiP films, but I was cracking up when Nick made the joke that we all had on our minds when he talked about laying outside shirtless with Daniel on the daybed.

8. When He Was So Not Into Leah

I have no idea what Leah is like as a person, but she definitely did not come off too well on TV. I was cracking up when she kept trying to get Nick's rose, and he was just like "So, thanks" instead of picking up what she was laying down.

9. When He Reacted To Ashley Coming Back

The cameras caught a natural and hilarious reaction from Nick when he let out an audible "ugh" when Ashley returned to the house after getting eliminated. None of us believed that she was really going to change her ways... not that I wanted her to, but still.

10. When He Told Ashley That She Would Never Be With Jared

Someone had to say it. I know I wished that I could communicate with Ashley via the TV, so I was happy that Nick gave her a healthy dose of reality.

11. When He Tried To Explain The Initial Pairing Of Chad & Lace

The first episode was absolutely crazy thanks to Chad and Lace's pool antics. I don't blame Nick for sitting with Amanda and the twins to just eat chips and watch the show. His commentary was so on point. Those two were not the most ideal pair — to put it mildly.

12. When He Explained The Importance Of Wells Dating Ashley

There was a lot of Ashley-centered drama so everyone at the resort (and at home) was hoping that Wells would ask out Ashley. It was extremely important to everyone's peace of mind and Nick described that urgency perfectly.

Nick has turned into the voice of reason on Bachelor in Paradise and I am all about it. Now we just have to wait until he speaks the truth again as the Bachelor!