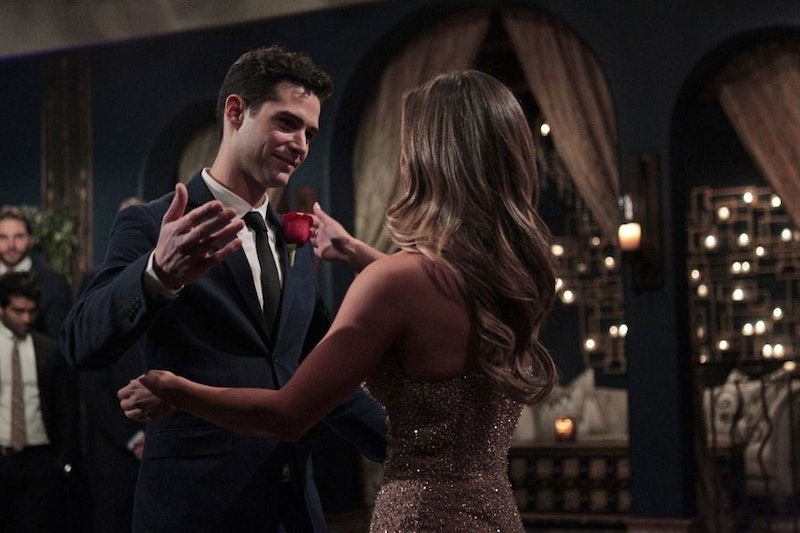 Guys, Bachelor In Paradise has just become more adorable. Radio DJ Wells from JoJo's season has arrived on the beach, and, safe to say, he caused a little bit of a stir among the ladies. Between Ashley, Jami, and promos showing Shushanna has an interest, Wells is possibly the most popular contestant in Paradise. And, going on dates with various ladies is all well(s) and good to test the waters, but he will have to make some real, solid choices eventually. So, who does Wells choose while on Bachelor in Paradise?

Wells definitely isn't limited in who he can snag here but I am rooting so hard for him to end up with Ashley I. Yes, I am serious. These two need to happen. Once he arrived, he formed a pretty quick connection to Ashley I. and when she said, "I like his tacos and I like his face," I was immediately on Team Ashley I. Luckily, every lady and every man (and all the crabs, according to Daniel) on the island were also feeling this way, and they all made sure to tell Wells that Ashley I. was the one he had to take on his date. Did he listen? Of course he did, because Wells is a smart guy, and he had an entire island campaigning for him to do this.

I have a feeling that these two are going to work, at least for a while. I mean, poor Ashley I. was just telling the camera about her dead dog and asking the dog's spirit to bring her someone to take her mind away from Jared and, poof, Wells walked in. That's some spiritual realness right there.

I am still a little concerned that Ashley I. is far too obsessed with Jared to ever truly commit to another human being, but this is something that could at least distract her for the time being. She has been bumming the entire cast out for weeks, so I know that none of the other women that are already there will be making any issues for the couple but that doesn't mean that the new arrivals Jami and Shushanna (and anyone else) won't try and shake things up, because they haven't had to witness the Ashley I./Jared show for the past couple of weeks.

Still, my prediction is that these two are going to make it work. They are super cute and they both love dogs and tacos. That's the foundation upon which a very solid relationship can form, in my opinion. I don't see them getting engaged because that's a lot to expect right now. Ashley I. is not ready to move into that territory at the moment. Let's hope that she can wipe away her mascara tears long enough to open up to adorable Wells, because he deserves an amazing lady and vice versa.