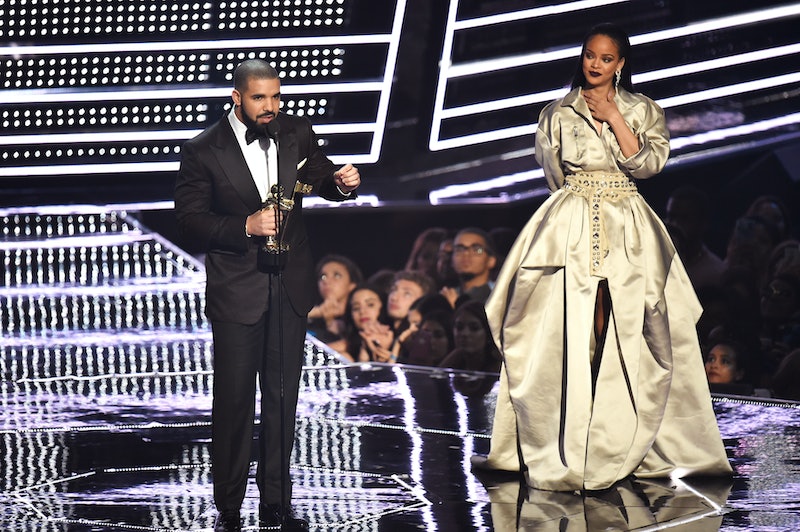 On Tuesday, the needle on the record player that is internet dragged to a screeching halt when website drakeandrihanna.com launched, sending AubRih fans/shippers into a frenzy. The site’s original page featured only two things: the 6 God logo and a clock counting down to next Thursday. Why would our favorite maybe-couple Drake and Rihanna create a website with a countdown clock? we wondered. This must mean Drake and Rihanna will drop an album or announce something major, right? Alas, a few hours after the site reared its cryptic head, all of our dreams were dashed. According to Pitchfork, Drake and Rihanna’s teams confirmed that neither artist has any ties to the site; the cake cake cake cake cake cake is a lie.

So, who is behind the fake Drake and Rihanna site? Before the day was over, we had our answer: As New York Magazine points out, comedy website Super Deluxe and Joanne the Scammer (a character created by Branden Miller) uploaded a video onto drakeandrihanna.com and took full credit for the ruse. You really scammed us this time, Joanne.

…And yet, I am not ready to let go of the drakeandrihanna.com dream. *Grabs snorkel.* *Jumps into the Conspiracy Theory Ocean.* Let's do this.

What if — stay with me — Joanne the Scammer is both a scammer and a messy soothsayer who lives for seeing the future? What if Joanne saw that in nine days’ time, longtime pals and frequent collaborators RiRi and Drizzy will unleash something on the world? And what if Joanne, recognizing that the world would appreciate advance warning before such a monumental event, created this unofficial website? What if the unofficial countdown clock actually tells the truth, and that's the scam? And what if Joanne's "the website is a scam!" video is a scam?! What if in just nine days, RiRi and Drizzy release an album, announce a joint tour, drop a documentary, launch a clothing line, or get married (or all of the above)?!?!

Scams and frauds aside, an AubRih album doesn't seem too unrealistic, right? It might not happen next week, but what if it does happen one day? No, I don't have an inside scoop or whatever, I'm just going off of the following facts: RiRi and Drake have recorded a bunch of bangers together (and presumably work well together), are close buddies, seem to enjoy hanging out, and are two of the biggest acts out there right now. That album (and the inevitable tour) would be huge! An an entire album of Rihanna and Drake collaborations would make the most sense! How has this not happened already?!

Whether an AubRih album is actually in the cards or not, I'd like to thank Joanne for creating this website and only adding scam fuel to the maybe-real fire.