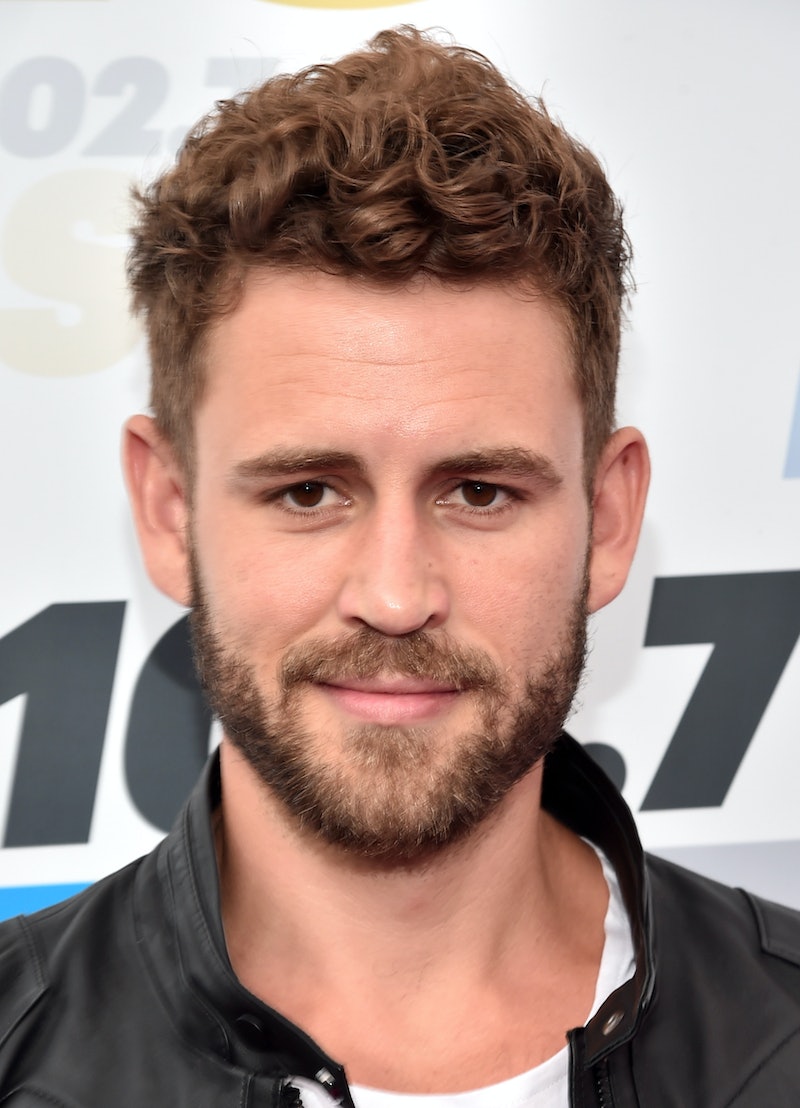 It’s been a long, hard road for Nick Viall to become The Bachelor . Quite a few people were shocked after his new role was announced on After Paradise, but I wasn’t — Nick has had a bit of a Bachelor resurgence as of late, and he deserves that season of The Bachelor. Now, I didn’t always feel this way — after Andi Dorfman’s season of The Bachelorette, I thought that Nick was an opportunist that wanted to say anything to get Andi’s goat on After The Final Rose. But as I saw more of him, my opinion of Nick totally changed from Andi's season until now.

For those of you not that familiar with Nick's history on the show, he was one of the last two gentlemen left on Andi Dorfman’s season of The Bachelorette. Josh Murray, his current Bachelor In Paradise nemesis, was the other. Andi ultimately picked Josh — but, before then, in the Fantasy Suite, she chose to have sex with both of them. No big deal, you know? I would want to kick the tires and turn the engine on before I bought a car for the rest of my life, too. After being rejected, Nick decided on the After the Final Rose special to ask Andi, "If you didn't love me, then why did you make love with me?" Andi was horrified, and many fans, including myself, thought it was out-of-line and slut shame-y to call out Andi's sexual choices on national television. It’s none of anyone’s business, really, what goes on in the Fantasy Suite. Nick was vilified for this, and I thought it was gross for him to bring it up in front of all of America. My thoughts of Nick were not great at this point.

The next time Nick popped up on my television screen was on Kaitlyn Bristowe’s season of The Bachelorette. I know, I know — Nick has a thing for reality television love. When he appeared as a contestant for the first time around Week 5, Kaitlyn was glad to see him, and Nick became a frontrunner for her hand in marriage. They even had sex in the middle of the season, which is the first time The Bachelor or The Bachelorette has alluded to that happening outside the Fantasy Suite. Kaitlyn was called a whore and worse by fans for sleeping with Nick so early on — Chris Harrison read some of the mean tweets about her on After The Final Rose, and they were truly despicable. I don’t know how people can say things like that to another person. Anyway, it was here that I started to turn around on Nick — even though Kaitlyn didn’t choose him as her fiancé, Nick defended Kaitlyn to the end both on the Internet and on any press outlet he could. A woman’s sex life is her own business, he said, and it’s not something to be ashamed about or hide.

Nick did a total 180 from Andi's to Kaitlyn's season. I think the word we’re looking for here is “evolution.” After watching Nick get rejected the second time and then join the cast of Bachelor In Paradise, it became readily apparent to me, not only how rational he is, but also how kind and helpful he is with matters of the heart. Nick had obvious and important friendships with Ashley Iaconetti, the Ferguson twins, and Jubilee Sharpe on Bachelor In Paradise — he coached them all through the roller coaster of Bachelor In Paradise, doling out advice and encouraging them all to go with their gut (and for Ashley to finally give up on Jared). He was also completely forthright about his role in Andi Dorfman’s book, It’s Not Okay, acknowledging that what she wrote about him was true — even though not everything she wrote was flattering.

Contrary to the common knee-jerk reactions of the Internet and the media, people can change. People deserve the chance to change and grow. Writing off Nick because of something stupid he said five years ago is just as stupid as what he said. In case you hadn’t noticed, being on a show like The Bachelorette makes people a little nutty. Your reactions are heightened. You don’t act as you would normally act. I think the Nick of Andi’s season was a hurt and scared man who had just been absolutely annihilated on national television, and he wanted answers as to why. Did it come out right? No. Should he have said that to Andi, especially on TV? No. But, Nick has redeemed himself, at least in my mind, many times over. He never deserved the villain edit he got — Nick just made a mistake. Now, it’s time for him to find love on his own terms, and I’ll be tuning into every episode of his season of The Bachelor.