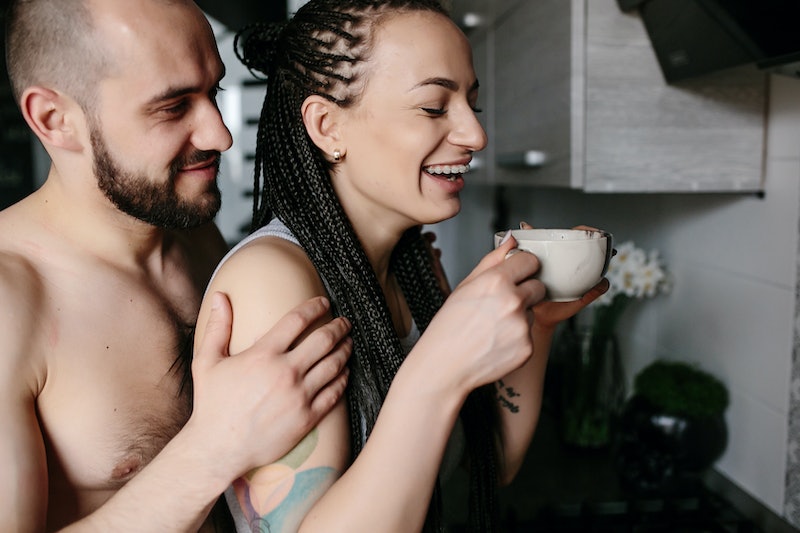 Moving in together is a big deal for a relationship. Suddenly your space is no longer your own, and sharing and compromising become part of the equation more than ever. Because this is the case, HomeAdvisor surveyed 2,000 men and women, and came up with some interesting findings in their Home: Habits and Preferences results. For example, the number one pet peeve for couples living together is not closing the blinds or shades at night. For 85 percent of respondents, this creates so much annoyance that they’re willing to tell their partner to get the hell out if they can’t close the damn blinds!

According to research, people opting out of marriage has been on the rise for years. But while that’s definitely the trend, further research has found that more Millennials are cohabitating. Sure, they may not be locking it down with marriage, but they’re still willing to take a chance and cohabitate with a partner.

The study examined gender habits and preferences, as well as what’s preferred for different generations in regards to what potentially irksome things that might arise while living together. Here are nine things that can drive cohabiters batty.

1. Most People Must Have Their Doors Locked When They’re Home

While closing the blinds is the number one preference for people, at 85 percent, for 82 percent it’s locking the doors while home, with women, at 83.1 percent, being more concerned than men at 81.9 percent. For these people, even if it’s the middle of the day, they want those doors locked. You never know when your neighbor is going to bust in a la Kramer style.

3. The Majority Are Bothered By Clutter

While one person’s “clutter,” is another person’s “stuff,” either way, 68.7 percent of people are deeply annoyed by their partner's “stuff” that’s constantly “cluttering” things. Women, at 70.9 percent, in particular, are a bit more bothered by this than men, at 67 percent.

4. Half Of People Watch TV In Bed

According to the study, 50.9 percent of people like to watch TV in bed, while the other percent isn’t into it. Interestingly, women, at 53.3 percent, are more likely to watch TV in bed compared to only 48.9 percent of men who do. On a side note, a 2014 study found that people with TV in their bedroom have more sex. So, if you’re annoyed that your partner is watching TV in bed too much, it’s time to think about how you can make this work to your advantage.

5. Over 40 Percent Want You To Wash The Dishes ASAP

For 46.7 percent, washing the dishes immediately after using them is a must. To not do so, can end in WWIII. I should know; I’m in that 46.7 percent and have always been with men in the other percentage. But when that was broken down by gender, it was more men, at 49 percent, than women, at 44.4 percent, who felt this way.

6. Most People Aren’t Too Concerned With Making The Bed

My thinking has always been, if no one is coming over, why bother making the bed? And, apparently, the majority of people agree with me, because only 36.1 percent think that the bed should be made every morning. Women more so than men, at 41.1 percent and 31.7 percent, respectively, believe this is important stuff.

Well, duh! I mean, if you’re not paying attention, you’re liable to fall in, so it makes sense that only 35.5 percent think it’s totally fine to leave the toilet seat up. Of course, when this was broken down by gender, there were no surprises: 52 percent of men thought it was acceptable, compared to 16.8 percent of women who thought it A-OK behavior. The study also found that more millennial men and women, than of any other living generation, think leaving the toilet seat up is fine. The Baby Boomers, on the other hand, are the ones least likely to think this behavior is appropriate.

9. Less Than 10 Percent Like To Fall Asleep With The Light On

Honestly, after living in New York for so long, where it’s pretty bright 24/7, when I’m out in the country visiting my parents, I sleep with the light on… weird, I know. But, I guess it’s not TOO weird, because 7.6 percent of people in the study prefer to sleep with the lights on, too. Apparently, this is most popular among Baby Boomer women, so maybe I’m a 70-year-old woman and no one told me.