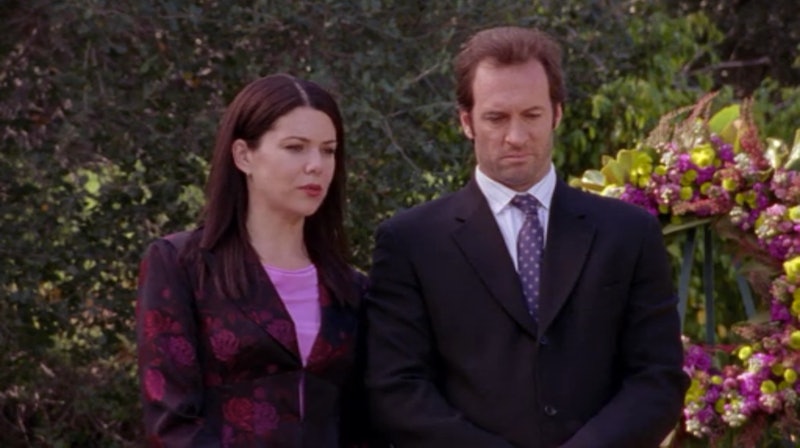 It is hard to argue against Luke Danes' place as one of the best Gilmore Girls characters. The irascible Luke was far from perfect. Perpetually grumpy, stubborn, and known for being a bit on the judgmental side, the man made his share of mistakes over the course of seven seasons. Ultimately, his flaws only made him more complex. Luke was, above all else, a good man, and there is no episode of Gilmore Girls that defines Luke quite like Season 2's "Dead Uncles and Vegetables."

Season 2 saw Luke's world expand with the introduction of Jess. Suddenly, Luke had a nephew who needed him. He was no longer the diner owner with a soft spot for the Gilmores, he was a man with a complicated family life of his own, and it only became more complicated with the death of his Uncle Louie. It did not matter that Uncle Louie was never shown onscreen. The episode does an excellent job of revealing what kind of man he was — a selfish, angry man who alienated everyone in his life before his death.

With his father dead and his sister too busy following her bliss, Luke was the only Dane left to deal with Louie's very specific final requests. Luke being Luke, he took on the task because he was always, above everything else, devoted to his family. Louie may not have been a great man, but he was Luke's uncle and that meant something to him.

Gilmore Girls established Luke's admiration for his father early on in the series when it was revealed the diner had once been his dad's hardware store. Luke always wanted his father to be proud of him, and that meant taking care of their remaining family, no matter what. In the episode, when the town refuses to grant Louie's final wishes on the grounds that Louie was the worst, Luke begins to wonder if he will end up more like his uncle than his father.

It is heartbreaking to watch Luke fight so hard to do right by Louie even as he is overcome with doubts about himself. Luke has no idea how much the town values and loves him. In his mind, he could very well end up alone with no one at his funeral but a single relative who shows up out of obligation. Beneath his gruff exterior, Luke fears he pushes people away too much. He fears being alone.

"Dead Uncles and Vegetables" exposes Luke's deepest fears, and then shows him how unfounded they are. The entire town pulls together for Luke because despite his complaining, he is always there for them. Luke is a giving person. He is always there for Lorelai and Rory, he is a friend to Kirk, he brings Civil War reenactors hot cocoa, tea, and coffee when they are standing all night in the snow, and he takes his nephew in, no questions asked. That's who Luke is, and the town knows it even if Luke cannot see it for himself. In his time of need, they rally around him just as he always rallied around them.

This episode, more than any other, speaks to Luke's heart. It is not about his love life or even his tribulations with Jess. Instead, it focuses on Luke in a time of need and proves he will never be a Louie because he is way too much like his dad for that to ever happen.

More like this
“The Door Is Always Open” For Another 'Breaking Bad' Spin-Off, Says AMC Boss
By El Hunt
S Club 7’s Jon Lee Continues To Reach For The Stars
By Rachel Mantock
The 'Hocus Pocus' Sequel Finally Has A Release Date & It Makes Total Sense
By Shannon Barbour and Radhika Menon
Vecna Officially Has A Fan In 'Stranger Things' Star Jamie Campbell Bower
By Alyssa Lapid
Get Even More From Bustle — Sign Up For The Newsletter