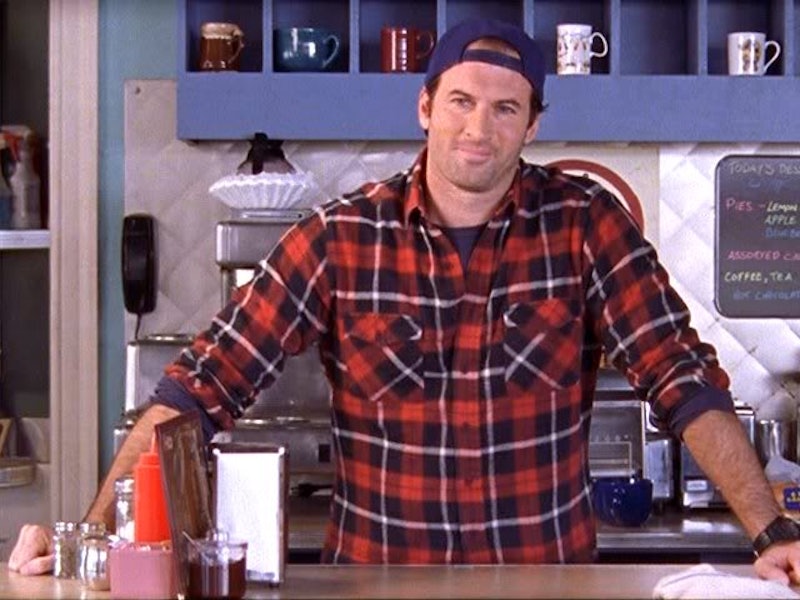 From the moment it was revealed that Luke Danes was heading back to Stars Hollow, fans have been trying to figure out what exactly that means for Luke and Lorelai's relationship on the Gilmore Girl revival. It's a valid question, since any fan who had been shipping the two since the beginning of the show were left with just a kiss. A really good kiss, but not an all-revealing kiss. That's why the Gilmore Girls revival has a lot of explaining to do about this and some other Luke-related items.

We all want to know whether he got together with Lorelai in the end and whether they're still together now, but that's a question no one wants to spill the beans about just yet. It's basically the biggest question of the show. So, those smaller questions, the ones that seem almost entirely inconsequential, that are worth asking in hopes of earning clues that could lead us to an answer of Lorelai and Luke's status in the revival. For all those fans who have been wondering about Luke's status on the revival, I've rounded up a few questions that get all the things we're dying to know and definitely aren't afraid to ask.

1. Does Luke Still Own A Diner?

Don't worry, Luke's is open for business, as Scott Patterson made clear in a tweet from the set, though it seems like it's gotten a paint job and an update in the last decade. And let's talk about that shirt with the Luke's Diner logo. Did he finally decide to take Richard's advice and franchise his place? Are his servers actually wearing uniforms now?

2. Does Luke Still Have His Old Pickup Truck?

He sure does. He also seems to like parking it at Lorelai's house, which could reveal how close they are now. Some have hinted it could just be a brief visit or Lorelai's birthday, which means he's there to fix up some things around the house. Sure, maybe those are true, but let's at least note that his truck is parked behind Lorelai's, which likely means he's planning on being there awhile. Maybe forever?

3. Are Luke and Lorelai Married?

Ever since it was revealed that there would be a Gilmore Girls wedding, thanks to a well-marked prop, Luke and Lorelai's names keep coming up. It would be a perfect ending to the revival and would allow a lot of the characters to get together for a reason.

4. Does Luke Live With Lorelai?

Some earlier photos from the set had one marked off as "Luke and Lizzy's," implying that Luke doesn't live with Lorelai, but instead lives with his sister, Liz. But, being that we've already seen photos of Luke's car in Lorelai's driveway, it's hard to believe he's living with his little sister. Perhaps, this is Luke's childhood home that we're finally going to get to see. Or maybe, Luke is staying with Liz while T.J.'s away on the Renaissance Fare circuit. Stranger things have happened in Stars Hollow.

5. What Color Hat Is Luke Wearing?

As any Gilmore Girls fan knows, the color of Luke's hat is very telling of what's going on in his life. When he broke up with Lorelai, he stopped wearing the blue hat she bought him as a gift. Well, guess what? That blue hat lives on. Scott Patterson tweeted a photo of the cap given to him by Lorelai with the message: "Hello, old friend." Another sign that things may be peachy keen between Luke and Lorelai.

Luke was always a standup guy, who, in the last season, made sure he would forever have a relationship with his daughter. In an interview, Vanessa Marano, aka April, said she's "part of the family," which means her relationship with Luke is good. It also may mean she's a Gilmore in the sense that she's sharing a table at Luke's with Lorelai and Rory, picking on her dad. And that this family is really a family because someone's made it official.

7. Does Luke Still See Any Of His Exes?

Every day it seems that we get casting news about a former Gilmore Girls guy who has dated Lorelai or Rory joining the revival. When it comes to Luke's exes though, none of them have been announced as signing on to the revival, which I can logically say means he's ending those relationships completely. Leaving him open for Lorelai's love. Ahem.

8. Do Luke And Emily Finally Get Along?

After all these years, it would be interesting to see how Emily feels about Luke. She's always been icy to him, knowing she had to be nice if she wanted Lorelai in her life. But, since they're both a little older and obviously a little wiser, could they finally get on the same page?

9. Has Luke Expanded His Choices Of Coffee?

In all these years since we last left Luke, I have to imagine he's made some updates to his menu, probably to the horror of the Gilmore girls. This has me wondering if he's decided to switch up his coffee brewing standards, going away from his old school percolator for something a little more fancy. Yeah, I know, Luke isn't into fads, but at this point I have to assume someone working in the diner knows how to make a latte.

10. Has Luke Finally Gotten Lorelai To Eat Some Vegetables?

Watch the show again, and you'll notice there are not a lot of greens in the Gilmore girls diet. Luke on the other hand was very into keeping healthy. In the years since we last left him, has he been able to sway Lorelai's diet? Maybe by hiding vegetables into brownies, like people do with children?

11. Is Luke The Head Chef At The Dragonfly Inn?

This has been a rumor to explain Sookie's absence, and, if true, it would make sense that Luke, who we know can make more than diner fare, would fill in if she had to leave for any reason. He's done it before, filling in when she was on bed rest during her pregnancy. He even showed Sookie a thing or two about cooking, though she may never admit that. If this is true, which it probably isn't, it likely means Luke and Lorelai are on very good terms.

Photos from the set have revealed that Luke still owns that sign with the big red mark through an antiquated looking cellphone, but this is 2016, so there's absolutely no way that anyone is paying attention to that sign. That's likely why, according to Gilmore News, Luke's added a second sign with a few updated rules for 2016. No texting while ordering. No MAN BUNS! No taking pictures of food. No headphones. If I can hear your music through your headphones, WHY ARE YOU WEARING HEADPHONES?”

13. How Many Stars Would Luke's Diner Get On Yelp?

This has been something Reddit has had fun trying to figure it out for years now. We know that Luke can basically make anything taste delicious. But since Luke isn't always the friendliest, he's likely to lose points. The guess seems to be a 3.5. Probably one of those 3.5s that stars by complaining about the service before raving about the food.

Some of these questions are more serious than others, but all of them reveal a little bit about the Luke of 2016 and ultimately get us closer to figuring out his relationships status. Unfortunately, we're probably going to have to wait until the show airs to actually get any confirmation on most of these questions. In the meantime though, you may want to start following Scott Patterson's Twitter for any clues that could help crack the case of what Luke is up to now.