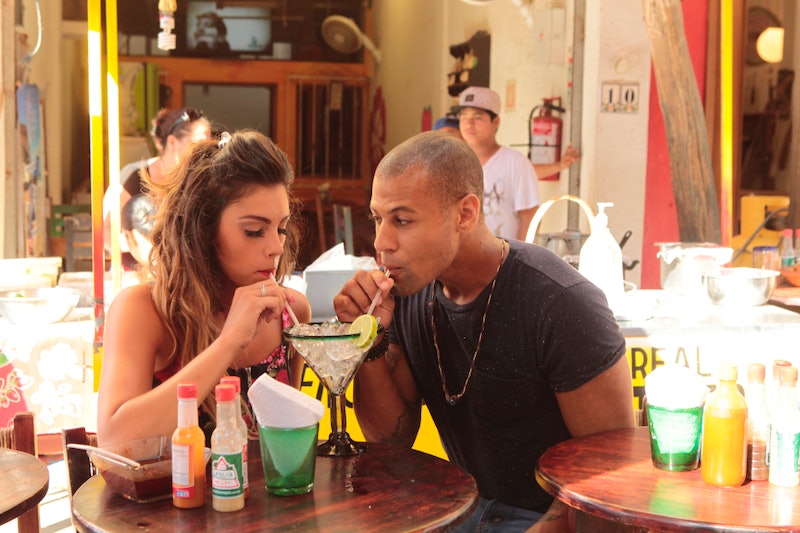 I've been a big fan of Grant and Lace's coupling on Bachelor in Paradise 3, and I'm so thrilled that the duo will be leaving Mexico engaged and ready to spend the rest of their lives together. Viewers have seen both Lace and Grant's respective unsuccessful journeys on Ben Higgins' season of The Bachelor and JoJo Fletcher's season of The Bachelorette, so it was even more satisfying to see these two find love with each other. But did Grant pay for the ring that Lace is leaving Bachelor in Paradise 3 with? Well, that depends on what the contract says, according to Hollywood.com.

I hate to take the romance out of the situation for a second, but this is reality TV, so here's a bit of the real. Hollywood.com reported that there are allegedly stipulations in the contestants' contracts about the Neil Lane engagement ring. Former Bachelorette winner Jesse Csincsak claimed to the website that the contract allegedly states if the couple stays together for two years, then they get to keep the ring — but it they break up before then, they must give the ring back. A 2010 report from Radar added that the winning couple doesn't need to marry within that time, just stay together. When asked by Bustle, ABC had no comment on the matter.

That isn't necessarily what's in the Bachelor in Paradise contracts, but it's very possible that the producers have a similar deal with the contestants. Grant may not have had to shell out a ton for an engagement ring, but his love with Lace is still totally the real thing. Here's why I think these two belong together for the long haul.

They Give Each Other Second Chances

From the very first moments in Mexico, Grant was drawn to Lace — but unfortunately, she got swept up in Hurricane Chad. But, once Chad left Playa Escondida, Grant was willing to give Lace a second chance and get to know her outside of that whole Chad mess.

Earlier this year, Lace pursued Ben Higgins on The Bachelor with a little too much wine and too many self-proclamations that she wasn't crazy. On Bachelor in Paradise, there has been none of that for Lace and Grant. They accept each other as they are.

They Go At Their Own Pace

Grant told Lace that he loved her first — and it was too cute (see above) — but she wasn't ready at the time and he was OK with that. They fell in love with each other at their own pace.

They've Got Their Own Couple Name

Grant and Lace named themselves collectively as "Grace" (a portmanteau of their names) and got tattoos of the word, so you know it's official now.

Aside from a few occasions, Grant and Lace are always seen together — and usually making out. It's no wonder they want to devote themselves to each other. Grant even made up a verb for her: "Lace'ted" (above).

These two aren't lovey dovey all the time. Grant and Lace fight and argue, but they've always found their way back to each other.

The ring may belong to the Bachelor franchise producers, but Grant and Lace's hearts obviously belong to each other.