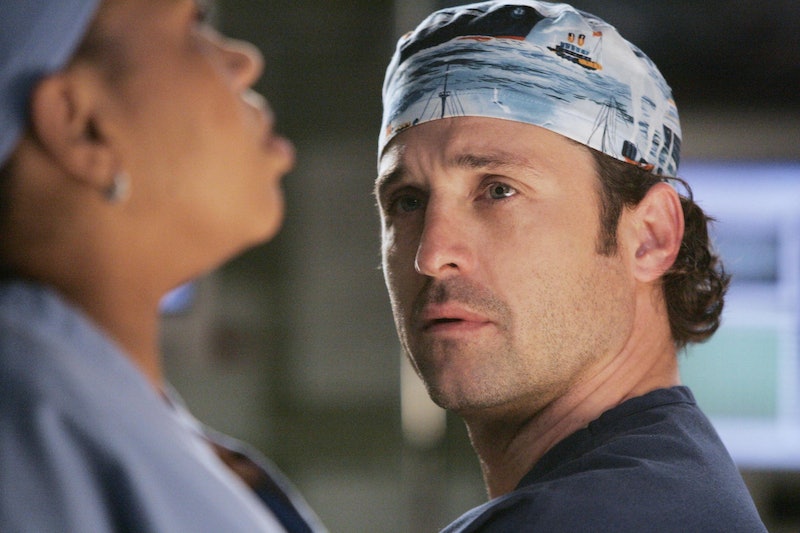 Though he's no longer with us (RIP), Derek "McDreamy" Shepherd was the second most important character on Grey's Anatomy. Because, without Derek, there would have been no Meredith and Derek, no "pick me, choose me" love story that spanned season after season during the medical drama, and did I mention no Derek? Though it's hard to pick a favorite McDreamy episode, there's one in particular that my mind always circles back to and apparently I'm not alone. Just recently, the actor who played (RIP) Derek "McDreamy" Shepherd — Patrick Dempsey — revealed which Grey's Anatomy episode was his favorite. The episode he and I are both talking about is, of course, the pilot.

When the actor was given this question during an interview with Cosmopolitan U.K., he answered,

I have to say my favorite really was the pilot because we didn’t know what was going to happen, and then there was that sense of discovery. When I saw it for the first time, I thought the music was incredible and it was fun to be a part of such a strong ensemble. That was special.

Agreed on all accounts. In fact, the pilot happens to be a favorite for many Grey's Anatomy fans, but, coincidentally, "A Hard Day's Night" also happens to be the best McDreamy episode. Here's why:

1. Because McDreamy Was The Second Person We Saw

This sets the stage for how important and central McDreamy was for the show. He's also naked on the floor during his intro, just FYI.

2. Because We Were Introduced To THE "Dr. Shepherd"

Per his words, this morning it was Derek. Now it's Dr. Shepherd. Later, it will be McDreamy, but let's not get ahead of ourselves.

3. Because This Iconic Line Happened

4. Because The First Elevator Scene Happened

Sure it wasn't as romantic and heartbreaking as later elevator scenes would be, but, as Meredith and Christina explained a case to Dr. Shepherd in the elevator, you could get the sense that important conversations would go down in elevators from here on out, right?

5. Because McDreamy And Meredith First Scrubbed In Together

The Bonnie and Clyde of operating rooms. Without the robbery. And the killing. You know what I mean.

6. Because "It's A Beautiful Night To Save Lives" Is Said For The First Time

7. Because He Tells Meredith That He'll "See Her Around" And It's Clear What This Means

8. Because He Gave Meredith This Look

And thus, MerDer was born.

Oh the memories. They hurt.