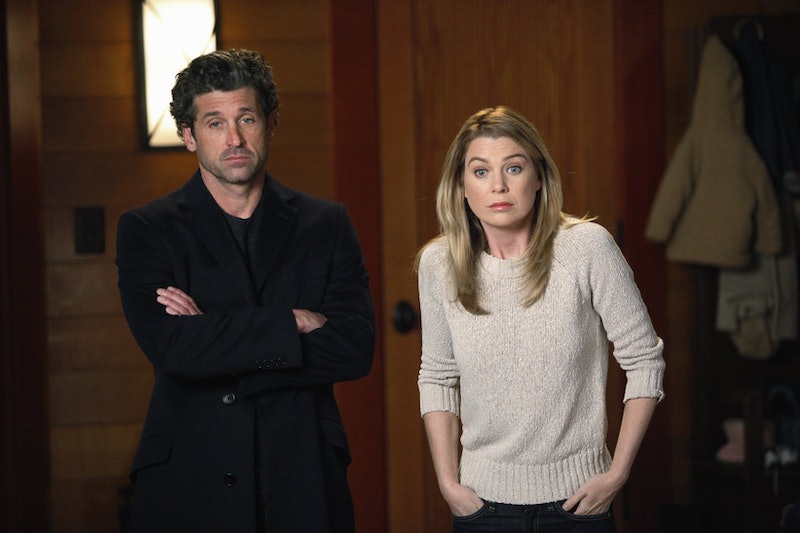 In the time leading up to the Season 11 premiere of Grey's Anatomy we learned that Meredith Grey and Derek Shepherd's relationship was in jeopardy. With Derek's job threatening to take him to Washington DC and Meredith firmly wanting to reside in Seattle, it looked like the pair might be on the road to divorce. So how did the first episode of the new season treat them? Not well. It's only been one episode but things aren't looking good for Meredith and Derek's relationship, and Derek can't fix things on his own.

Derek hadn't even left for DC yet and the pair was already living apart when the episode started. They were still together, but living separately, and talking very sparingly. Meredith was struggling with whether or not she should join Derek, but she also seemed resolute to follow Cristina's parting words to her: Derek is not the sun and Meredith didn't have to revolve around him. "I don't want to go and resent him forever," Meredith complained to Alex Karev (her new person).

But Good Guy Derek made the choice for her and decided to resign from the job and stay with his family in Seattle. Problem solved, right? Of course not, because Meredith is dark and twisty with really complex emotions. Instead of being happy that Derek chose her, and seemed fine doing so, she got angry. "I need a drink," she spat at him after he shared the good news.

Yikes. But why is Meredith so mad? Let's consider her history. It's possible that she's angry because she feels upset that Derek is throwing this amazing opportunity away. Possibly she's even jealous that she never got such an opportunity. Or, more likely, she's mad at herself for Derek choosing her over work, since Meredith chose her work over him just a few months prior by refusing to leave Seattle or the hospital she was doing her research in. Derek being so good can be infuriating to her at times. It's hard to be mad at someone who is so nice, which makes you even angrier because then you're feeling guilty too.

But whatever the true reason for her anger, it's clear that MerDer has some bigger problems underneath the surface. Problems that even Saint Derek can't save with self-sacrifice. If they're going to make it, Meredith might have to some of the heavy lifting as Derek can't fix things himself anymore, it seems.

Things aren't looking good for the show's flagship couple. All in all, it's a pretty depressing way to start the season. We'll just have to hold out that Shonda Rhimes has a plan, and that the plan ends with Meredith and Derek together—like they should be.

More like this
Ellen Pompeo & Patrick Dempsey Just Showed Why They Should Team Up Again
By Brad Witter
Kaley Cuoco Was Set Up With Her New Boyfriend Tom Pelphrey By Her Manager
By Hugh McIntyre and Jake Viswanath
Why Was Sandra Oh At The Queen's Funeral? She Represented Order Of Canada
By Radhika Menon
The Queen Charlotte 'Bridgerton' Prequel Has A New Title & First Look
By Bustle Editors
Get Even More From Bustle — Sign Up For The Newsletter