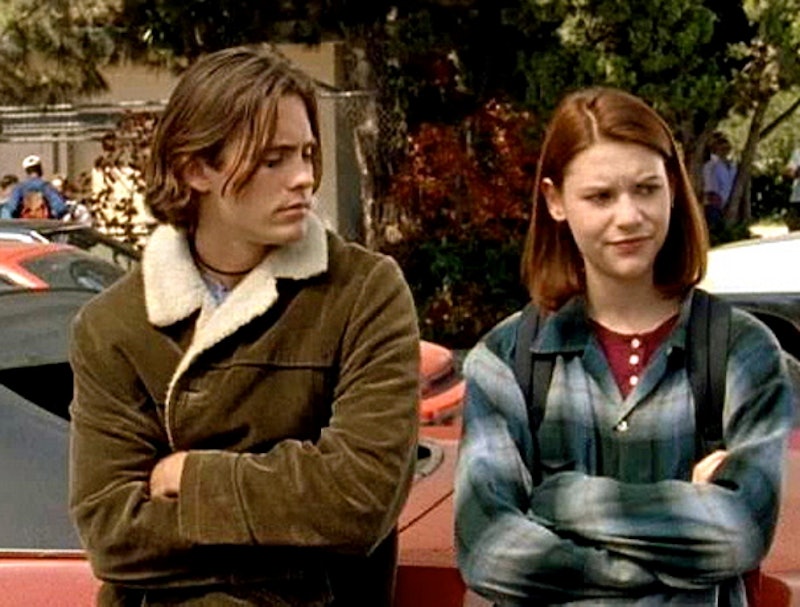 With Labor Day just past us, it feels well and truly like the beginning of fall (though technically, autumn doesn’t officially begin until the fall equinox on September 22). It’s only natural that this time of year you feel nostalgic for fall in the ‘90s, when you were growing up and the onset of autumn meant shorter days, cooler weather, and heading back to school. And flannel, glorious flannel.

Summer in the ‘90s was so much fun that moving into fall (and the classroom) could be a hard pill to swallow. After all, how could fall live up to the glory of sunny days with a Slip N’ Slide and ice-cold Squeezits? Or afternoons spent prowling the mall, wandering from Claire’s to Contempo Casuals and back again, asking your friends if you really can pull off glittery butterfly clips? (You could. They looked glorious on you.) How could autumn possibly compete with watching Jenny Jones and Oprah in the middle of the day?

But fall in the ‘90s wasn’t all bad. It meant getting to see your friends more at school and a break from the staggering heat. And it meant that Halloween was on the horizon, which may not have made up for losing summer, but it did mean that you finally got to start planning your Catwoman costume. And, let’s face it, a Catwoman costume can make up for A LOT.

So snuggle down into your flannel, put your favorite Counting Crows CD in your Discman, and hop on the nostalgia train. Here’s what you loved about fall in the ‘90s:

Flannel shirts. Strappy flannel dresses. Flannel pants. Flannel LIFE. If the early ‘90s were a fabric, they would be plaid flannel, through and through. The end of summer may have been depressing in a lot of ways (what with the start of school and the loss of your Slip n’ Sliding, sunny days), but it did signal the start of flannel season (which always lasted from September all the way through May. If you could’ve found a flannel bathing suit, you could have been clothed in the stuff year-round.)

There were a ton of high school-themed shows in the ‘90s (including Saved by the Bell, Buffy the Vampire Slayer, California Dreams, Beverly Hills 90210, and Hang Time, to name just a few), but none of them remind me of fall as much as My So-Called Life. Perhaps it’s because every character in that show wears flannel approximately 92 percent of the time? Don't be mad, Jordan. You know it's true:

Nothing was more exciting at the beginning of the school year than prepping your school wardrobe. And obviously the DELiA*s catalog was the first place you’d start. (Even if you didn’t actually get to buy a lot of stuff from the catalog, it was pure teen fashion inspo, and you’d pour over every outfit to see how you could replicate it).

No ‘90s kid’s backpack could be complete without a Trapper Keeper for maximum organization.

Trapper Keepers may have been functional, but Lisa Frank was the stuff of dreams. Psychedelic, rainbow-fueled, unicorn dreams. Nothing was more covetable than Lisa Frank stuff, except maybe…

Do you remember these complex pencil cases from Sanrio? They were super fancy back in the day, featuring a bunch of buttons that would make little trays pop out around the sides. Some of them even had compasses embedded. (So that you could use it if you were lost in the woods? OK, so maybe all of these fancy features weren’t terribly functional, but they were very, very cool). The hard part was picking your favorite Sanrio character. My faves were Keroppi and Pochacco.

As summer gave way to fall in the ‘90s, you traded your platform jellies for clunky Docs. Frankly, the Docs were a lot more comfortable.

After a whole summer away from eating in the school cafeteria, August and September meant the return of the school lunch. If you were very, very lucky, that meant Lunchables.

Fall may have meant a return to classes, but the silver lining (or should I say the pastel gel ink lining?) was the gel pen you got to take to school with you.

Is it bad that I STILL like Fruit by the Foot?

Buffy the Vampire Slayer had a number of Halloween episodes, and they are all excellent in different ways. (I mean, obviously. It is ­Buffy, after all, which we all already know is one of the greatest shows ever of all time, right? Right?). My fave has to be Season 4’s “Fear Itself,” in which the Scooby Gang finds itself trapped inside a frat house with a demon that plays on each person's deepest fears. It’s legit scary and features some of the cast in awesome costumes, the best of which is Willow’s Joan of Arc, accompanied by Oz as God. (It was pure ‘90s #relationship goals). And Anya as a giant pink bunny? Priceless.

You know the one — it has past lives, ‘80s flashbacks, and Monica with a Turkey on her head. It’s everything great about autumn in the ‘90s, wrapped into a single, glorious, 22-minute storyline.