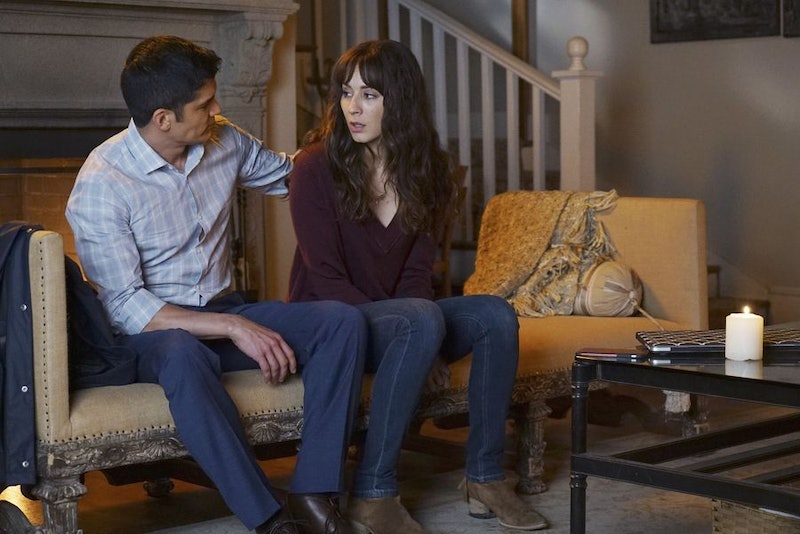 In addition to all the beheadings, gunshot wounds, and torture going on, all the 'ships on Pretty Little Liars got seriously shaken up. Some couples are back on, while others got put on hold, perhaps indefinitely. Spoby was most definitely on the latter list — could Spencer end up single, as Pretty Little Liars heads into its final episodes?

Toby-wise, things aren't exactly looking good. Perhaps one of the most shocking moments of the #PLLDeathTrap finale was the image of Toby and Yvonne in the aftermath of a very violent car crash. At this point, his fate is still very unclear; the car crash sure looked deadly, but showrunner I. Marlene King hasn't revealed his fate yet. She revealed that A.D. was not behind the car crash (shocker, right?), but, other than that, she's keeping mum.

For my money, I'm inclined to think that he's dead. After all, the farewell kiss he shared with Spencer might just be the heartstring-pulling nail in his coffin. As Bustle's S. Atkinson pointed out, Toby's demise might be just what Spoby needs — as morbid as that may sound. I mean, as passionate as their relationship has been over the past six seasons, it's been clear they've been growing apart for a while now, and it would be a little strange if all your favorite Pretty Little Liars 'ships were meant to stay together forever, like Haleb clearly is.

Plus, no one wanted to watch Spencer homewreck Yvonne, who has, so far, proven to be a pretty cool character and who also happens to have a lot in common with Spencer. Add that all in with their bittersweet kiss goodbye, and you've got yourself a pretty finely-written exit for Toby. I'm not advocating for King to kill off all our favorite characters by any means, but, in some ways, it could potentially be a better series finale than more love triangles and betrayals for our favorite Liar.

Now, just because Toby might be out of the equation doesn't mean that Spencer won't find love elsewhere. Things could definitely take off with Detective Marco Fuery, and a lot could happen as the show wraps things up with its final 10 episodes. Still though, a new romance could feel a bit tacked on this late in the game, and it honestly could make sense for Spencer to finish out the show's run solo. Let's be real. Of the four main Liars, Spencer does seem most likely to end up single. Not because she's the brainiest, but because she's perhaps the most fiercely independent. Say what you will about the show, but PLL has always taken its responsibility to its young audience seriously — and think what a cool message it would send if Spencer were to finish out the show's run on her own.

Wouldn't it be cool to watch Spencer ride off into the Washington D.C. sunset (or sunrise, since she's headed east), off to continue her fabulous life as an up-and-coming heavy hitter to watch? Heck, she should just join Pope and Associates and be done with it.

More like this
Jack's Facial Hair Moments On 'This Is Us,' Ranked
By Grace Wehniainen
Everything To Know About 'Grey's Anatomy' Season 19
By Brad Witter
Everything To Know About A Possible Season 3 Of 'The Flight Attendant'
By Gretchen Smail
What Makes A Sally Rooney Sex Scene So Hot?
By Samantha Leach
Get Even More From Bustle — Sign Up For The Newsletter