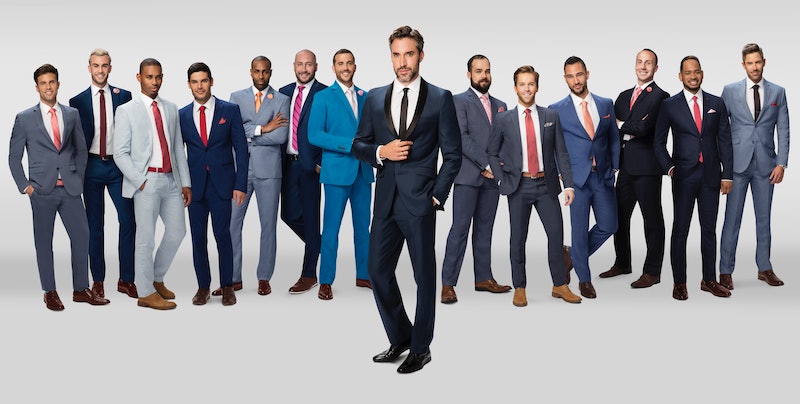 What are the necessary ingredients for a successful dating show? Strip away all the romantic trappings like roses, candlelit dinners, and paradise vacations, and the essentials are rather basic: a charismatic host to shepherd each episode along, a dreamy suitor to make everyone swoon… and of course a gaggle of willing contestants looking for love. Logo's upcoming gay reality dating series Finding Prince Charming naturally has all of those ingredients — but while the world has already been introduced to host Lance Bass and to "Prince Charming" himself, Robert Sepulveda, we still know very little about the men who'll be wooing him. Who are the Finding Prince Charming contestants?

There will be 13 men competing for Sepulveda's heart during the show's first season. They are varied in age, ranging almost a decade from 26 to 35, and they're also varied in race, career, and many other ways that viewers will have fun discovering when the show premieres this Thursday night. Among the group there is everything from stylists to entrepreneurs to literal boy scouts. Let's take a cursory look at who 33-year-old Sepulveda will be wining and dining over the course of the next 13 weeks, as described by the show's official website:

This 29-year-old Michigan native's job is certainly a mouthful: "behavioral healthcare administrator," whatever that means. Brandon is also a "licensed spiritual practitioner" despite his prior experience "facing Christian conversion therapy as a teen."

Of course, you can't have a proper dating show without at least one contestant who is a "personal trainer." 34-year-old Brodney fits that bill here, and since it's "been six years since his last relationship," the Atlanta native is "ready for love." Oh, and he apparently also "gets told all the time it’s hard to believe he’s single," so he's humble, too.

What is it with dating shows and guys named Chad? This 32-year-old New Yorker is a "real estate agent" who is "a total momma’s boy" and also "a bit clumsy." It remains to be seen whether he'll be able to match The Bachelorette 's Chad Johnson — also a real estate agent! — in terms of sheer villainy.

This 26-year-old self-professed "manny" is one of the three youngest contestants on the show. He originally hails from Wisconsin, although he "considers his biggest achievement packing up and moving to California on a whim, only to change careers eight months in." Charlie has "never had a real relationship before," but will Finding Prince Charming be the place he finds one for the first time?

Having been "single for 11 years," 30-year-old Danique works as a "business analyst" in Los Angeles, but is also described as having a "whimsical, catch phrase-filled personality." Something tells me his time on the show will be legen… wait for it… dary.

26-year-old Dillon has perhaps the most eclectic bio of them all. He's "an Eagle Scout and a former ballet dancer," he went to school for "computer engineering," he "started a business by the age of 25," and he currently works as a "fashion publicist and designer" in New Orleans. Phew! I'm tired just writing all that out.

The oldest contestant on the show, 35-year-old Eric is a "hair stylist" based in Los Angeles who "places a priority on family, friends, community, and mental and emotional health." And Eric himself is here to assure us all that he's a "self-described 'great lover.'"

Apart from spelling his name weird, apparently Jasen is also a "celebrity makeup artist from NYC." The 33-year-old "has a great sense of humor but isn’t afraid to say what’s on his mind," which sound like the perfect ingredients for a reality show contestant.

Coming to us from Portland, 29-year-old Justin works as a "model and project manager" when he's not "dream[ing] of being able to switch careers with the change of an outfit — like Barbie." It's so important to have dreams in this world.

This 31-year-old New Jersey native works as a "college event planner," which means he gets to "lives his dream by mentoring hundreds of college students each day." Despite his "self-described 'sporadic' dating life," Nick wishes to be a "husband and dad" someday. No pressure, Robert.

34-year-old Paul is something of an entrepreneur, described in his bio as a "career man." What career exactly, you ask? He's the "founder of a tanning salon brand". Marry Paul and get free tanning sessions for the rest of your life? Tempting…

Our third youngster, 26-year-old Robby is an "on-air beauty expert" whose clients have included "Britney Spears and Lana Del Rey." Dating apps have left the young man wanting more; "too many boys and not enough men," he explains. (I hope he wins just because 'Robert + Robby' sounds adorable.)

This Italian stallion from Chicago "started his own fitness company from the ground up." The 31-year-old describes himself as a "late bloomer" since he didn't come out until he was 22. Oh, and bonus points to Sam for his bold choice of fashion in his headshot.

Which contestant will Sepulveda choose? Place your bets now and tune in to Finding Prince Charming to find out, starting this Thursday at 9:00 p.m. ET.