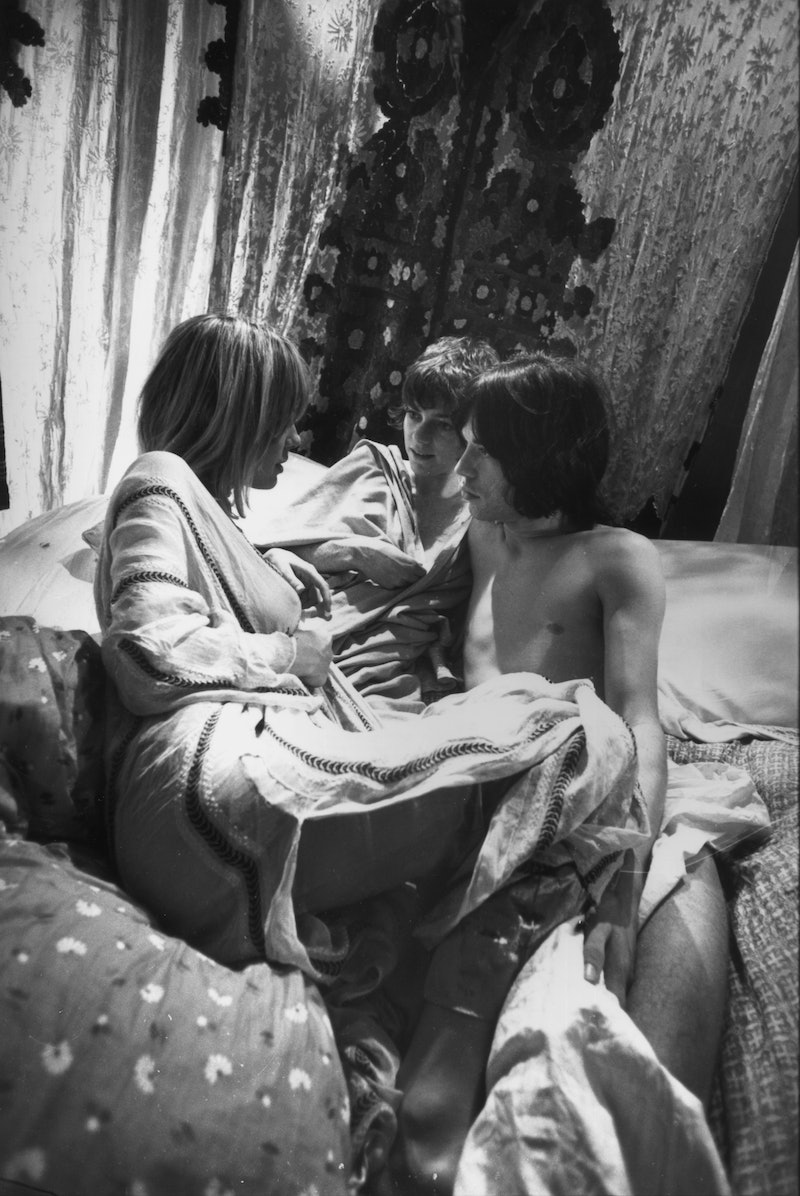 I avoided writing about my non-monogamous relationship for several reasons: 1) I knew my parents were reading everything I wrote, and didn't want them to worry or dislike my partner Jacob*; 2) for the first year we were together, I was the only one in my relationship "allowed" to casually date other people, and I thought that made me undeserving of the label "non-monogamous"; 3) I am in the most serious love of my life and didn't want people to view my relationship as any less legitimate; 4) non-monogamy was new to me, and I hesitated to write about something I not only knew little about, but also wasn't sure would stick; 5) I didn't want to be viewed as a sexual deviant, and therefore less respectable. In short, I was afraid of the judgement I might incur by publicly owning my choices.

I came out as ethically non-monogamous in bits and pieces — first to my friends, then in a vague allusion in a personal essay, then explicitly on my podcast Honestly Though, and then, finally, more explicitly in writing a few weeks ago. I use the phrase "coming out" here hoping it doesn't offend my LGBTQ friends because, really, I don't know what else to call it. I had been acting classically closeted, deliberately hiding aspects of my sexuality for fear of having my relationship delegitimized, of being viewed as less professional or a freak, of being trolled by readers and my parents alike.

Jacob met the woman he wanted to start dating the very night we recorded a podcast episode together about how non-monogamy works for us, as I was celebrating the huge relief of finally fully "outing" myself publicly (even if almost no one I knew was listening to the podcast at that point, including my parents, it was a step). In our conversation, you can hear how excited I am by the freedom and intimacy this relationship model has afforded me, but you can also hear that I am readying myself for the fact that I now also want him to enjoy the same freedom. As I watched them flirt that night, it felt like one of those moments when life laughs at you for thinking you're anywhere close to having your sh*t figured out.

As they began dating, I had a hard time. A really hard time. I didn't want to write about it because I was still figuring it out for myself, and, frankly, was too much of a mess. Even though they'd only been on a few dates and hadn't slept together, the jealousy felt so intense that at times, I thought this might just be a deal breaker for our relationship. I felt myself question whether I could do this, or whether I'd dug myself into a open-mindedness hole; whether I was at my core just an insecure hypocrite for being so easily able to enjoy casually dating other people on my end, and so seemingly incapable of allowing him to do the same.

But whenever I considered folding, I realized I didn't want to give up the freedom I'd gotten used to, nor deny the man I love the ability to be fully free and honest with me. So I kept going, often kicking and screaming (literally), both inviting and resisting the uncomfortable fears that were emerging: that Jacob would one day leave me, that his attraction to someone else was a comment on my inherent worth or the strength of our relationship, that his enjoying someone new somehow humiliated me or diminished our love. I chose to keep confronting these deeply uncomfortable feelings because I've realized I have certain moral principals that I want to guide my behavior in life: respecting the bodily autonomy of other living beings whenever possible; and following love over fear, compassion over domination. Non-monogamy is inline with my values, and while I wasn't yet sure if I could handle it in practice, I needed to find out.

Though I write about rocking a full bush, being vegan, and have even posted pictures of myself for articles mostly-naked, I've somehow remained relatively unscathed. Sure, occasionally I get messages telling me to deep throat a hamburger, but in all the many articles I've written, I've never been unanimously bashed for my beliefs or lifestyle. Until now.

At the same time all this was happening, I happened to also be conducting an experiment for an article with an unusual premise: seeing the effect that both of us floating in a sensory deprivation tank once a week had on our relationship. I kept a journal all month, and when I looked back on my notes to write the piece, now a couple months after Jacob's first dates, the jealousy I'd been grappling with was all over those pages.

By now, however, I was actually feeling much better. Certain fears had been confronted, and I'd met someone I was also excited about, both reminding me why I had wanted this arrangement in the first place and making me feel less powerless. The change had become less scary as I saw that what I'd feared about Jacob casually dating someone else — my relationship changing or being diluted — hadn't happened at all. But it would have been disingenuous and against the very premise of the article to omit the difficulty I'd had that month, especially when I know it will likely at some point surface again. The jealousy was the story of our relationship that month, floating the device to tell it. So I wrote that story.

Literally less than five minutes after I published the piece, I received a text message from my mom, who knows I'm non-monogamous but who I mostly don't talk with about it in detail, expressing concern. Jewish mothers basically invented concern-trolling, but if her reaction was this immediate, I knew Facebook would be even worse.

It was the usual pattern I'd seen when (mostly women) trolled other female authors on our site: degrade the person's writing, judgement, character, and relationship. Name-call. Make predictions about her future. Concern-troll with a judgmental expression of "sympathy" she didn't ask for. Though I was prepared for all of it, it still hurt. They were saying all of this about the thing that I had been most afraid of revealing, and about the person I love most. I mean, of course they were.

I've been working as an editor at Bustle for over three years now, and the pattern hasn't eluded me: the more vulnerable someone is in their writing, the more they are trolled. Rape and abortion narratives are usually the most-trolled topics. Though I write about rocking a full bush, being vegan, and have even posted pictures of myself for articles mostly-naked, I've somehow remained relatively unscathed. Sure, occasionally I get messages telling me to deep throat a hamburger, but in all the many articles I've written, I've never been unanimously bashed for my beliefs or lifestyle. Until now.

I had but one defender in the chain — a total stranger — and I was so grateful to her, not just for her support but for taking the words out of my mouth. She said to the haters what I didn't yet feel the right to say myself: "If you hate it so deeply, perhaps confront that feeling in yourself."

Which is exactly why I will keep writing about it, even as I'm in the thick of figuring out just exactly how ethical non-monogamy works for me. I promise to share with you the parts that are messy, painful, confused, and that confirm all your worst stereotypes and fears about anything that falls outside the monogamy construct. I also promise to share the things that are sexy, fun, and that deepen my relationship and help me overcome my own fears, because that's why I'm doing this, after all. I promise to try to share my reality, even as it's imperfect and insecure, and not just when it's easy and clear.

If you judge our relationship, or think we "suck," or that non-monogamy is "emotionally hurtful and promiscuous," or a "horrible way to live," I would ask you to remember that people have long said all those same hateful things of queer and interracial relationships.

Which brings me to a few days after I'd let the comments sink in. I sent a message to my parents I'd wanted to send ever since I'd started publishing online, asking them not to read my work unless I'd expressly shared it with them. Just like that, I created a boundary with the trolls I'd been most afraid of all along. I'd been terrified of asserting my need to stop being stalked by my parents online, and yet, once I asked, they immediately assented. My ability to finally ask them to respect my space is a direct result of some of the ways in which I've learned to communicate my needs more clearly as I negotiate the shifting boundaries of my non-monogamous relationship. It is one of the many unexpected benefits, for me, of this arrangement.

So in the words of Evita, please, don't cry for me. I'm in the happiest relationship I've ever been in, one that's helping me grow in ways I never imagined, and one that I can now say, with all the certainty of human plans, that I plan to spend my life in. If you judge our relationship, or think we "suck," or that non-monogamy is "emotionally hurtful and promiscuous," or a "horrible way to live," I would ask you to remember that people have long said all those same hateful things of queer and interracial relationships.

We have a commitment to total honesty, trust, and open communication in our relationship — we promise not only to never cheat, but also never to lie about or repress our desires and feelings. We love each other for who we actually are, rather than who we might pretend to be for each other; the commitment is that we will try to weather any of life's changes and escape fantasies together. We have omitted one of the main reasons people leave; we can find out what else is out there any time we'd like, and so far, when we do, it only reaffirms just how much we'd prefer to stay together.