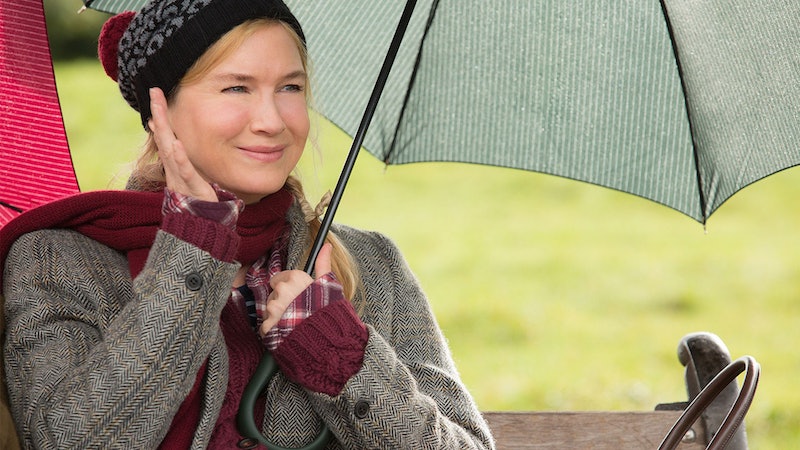 When I first learned that a new Bridget Jones film would be coming to theaters, I was apprehensive. It wasn't that I didn't want to see Renee Zellweger's heroine return to the big screen; I've always been a fan of the franchise, and was intrigued by the prospect of a third film. What made me cautious was the movie's proposed plot — Bridget, now in her 40s, still single, and miserable about it. Hadn't we tired of that cliched, sexist storyline long ago? Yet after seeing Bridget Jones's Baby, I'm thrilled to report that the movie isn't, as I'd been worried it would be, simply a rehashing of Bridget's old romantic woes. Instead, it's a feminist, empowering film that presents Bridget's singledom not as a problem to be solved, but a way for her to embrace her sexual desires. Considering how one-dimensional and cliched so many female characters in film are, that's a remarkable feat — but what makes it even more exciting is that Bridget Jones's Baby is just the latest in a series of 2016 films that portray not old-fashioned tropes, but the real, complicated desires and actions of women on-screen.

First, there was Hello My Name is Doris . This little indie, which debuted in March, follows a 69-year-old woman (Sally Field), who develops a crush on a much-younger co-worker. It's a funny, sweet film, and never condescending; Doris' romantic and sexual desires are meant to be seen as overreaching considering the age gap, but they're also treated with nothing but respect. Then, there was Ghostbusters . Much of the praise the July movie received was for its realistically complex heroines, particularly Kate McKinnon's scene-stealing Holtzmann. In the film, romance takes a backseat to ghostbusting, but nonetheless, the leading ladies bond over a shared appreciation for Kevin's (Chris Hemsworth) good looks. They treat the handsome receptionist as little more than eye candy, a hilarious and smart reversal of film's gender norms, where female supporting characters are ogled and objectified far too often.

Then, there was Bad Moms . The August release follows three women who rebel from their cookie-cutter lives, briefly leaving behind imbalanced marriages and too-needy children for a quick taste of freedom. They swap stories, get drunk, and hook up with guys, reveling in the excitement of, for once, putting their own desires before those of their husbands or children. Amy (Mila Kunis) even starts a romance with an attractive single father (Jay Hernandez), and she savors every moment of the attention — sexual and otherwise — he gives her. For the first time in years, Amy feels wanted, appreciated, and satisfied.

And now there's Bridget Jones's Baby, a movie that, instead of shaming its lead character for not knowing who the father of her baby is, makes her something of a hero to women everywhere. Bridget is frustrated by not knowing which man got her pregnant, but she's not ashamed, and not apologetic. Take, for instance, a scene in which Bridget's overly-traditional mother attempts to hide her at a political gathering out of embarrassment. Instead of running away in shame or agreeing that yes, her mother should be embarrassed of her single, pregnant daughter, Bridget chastises her mom for being judgmental and old-fashioned. She's confident and mature, a woman who, although in a less-than-ideal situation, is in charge of her life and not about to be humiliated for having casual sex or not being married.

It's a huge change from the Bridget of movies' past, a character whose singledom was a cause of her own shame and disappointment. Back then, not being married or in love was the cause of many a breakdown for Bridget, but not anymore. In Bridget Jones' Baby (which is, notably, directed by a woman), our heroine is a wise, confident, sexy 43-year-old who happily has sex with strangers and takes pleasure from the company of good friends. She still wants love and romance, yes, but she's not drowning in sorrow because she's single. Rather, she embraces the freedom it allows her and enjoys the feeling of being pursued by adoring men.

What makes Bridget and the films above so special is not just that they feature women as their protagonists — although, in today's film landscape, that alone is worth celebrating. These movies let their female leads be fully-formed characters whose desires — sexual, romantic, and otherwise — are treated as priorities. Women, particularly those over 30 or 40, obviously deserve to have sex and feel wanted without shame or criticism; and while these films are comfortable declaring that, as far as general pop culture goes, this is apparently a revolutionary idea. In the past, few films have dared to explore the sexualities and desires of their female characters in such honest, empowering lights. Yet over the past six months, these notable films have done just that.

And the results have been impressive. As of right now, Doris is the fourth highest-grossing indie film released in 2016, having made nearly 15 million since its release — far more than that made by the talked-about The Lobster or the latest Woody Allen flick. Bad Moms, meanwhile, has become a quiet, but massive success, crossing the 100 million mark in early September and still growing steadily. Bridget Jones's Baby is not yet out, but with love for the franchise stronger than ever, it's expected to be extremely profitable. And while Ghostbusters didn't do as well in theaters as expected, it still made over 200 million worldwide.

With success like this, it's clear that audiences are responding to movies that don't ignore or condescend to their female characters. Perhaps studios will finally be convinced that making films starring complex, sexually-active women is not just important, but essential, if they want box office success and a stronger connection with female viewers. After all, women make up the majority of moviegoers, according to the MPAA; it'd be silly if Hollywood didn't feature more films with realistic female protagonists that audiences will find relatable. Bridget and the other movies mentioned above are wonderful in that regard, so here's hoping that they're not part of a short-lived trend, but the start of major Hollywood change.

More like this
The 'Hocus Pocus' Sequel Finally Has A Release Date & It Makes Total Sense
By Shannon Barbour and Radhika Menon
What Makes A Sally Rooney Sex Scene So Hot?
By Samantha Leach
Shocked Fans & Former Co-Stars React To Ray Liotta’s Death At 67
By Grace Wehniainen
'Stranger Things' Star Joe Keery Is Dating An "Indie Scream Queen"
By S. Atkinson and Grace Wehniainen
Get Even More From Bustle — Sign Up For The Newsletter