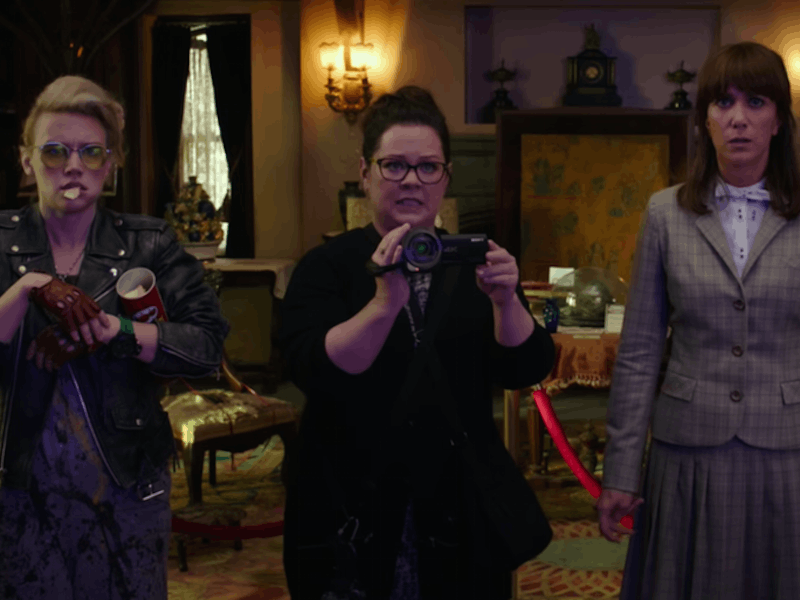 When Sony first announced that it would be remaking Ghostbusters with an all-female cast, misogynist backlash and trolling hit the web almost immediately. Fanboys of the original movies who claimed their childhoods were being ruined and that women couldn't possibly be funny banded together in a sexist attempt to destroy the movie, urging people to boycott it in theaters. Since much of this reaction happened before director Paul Feig and screenwriter Katie Dippold had even sat down to write the script (sigh), it was only natural that some of that vitriol made its way into the final film — not only in a scene featuring the four Ghostbusters reacting to sexist comments on their ghost video, but in the form of the movie's main bad guy. Yes, the villain in Ghostbusters is basically the equivalent of an Internet troll.

Spoilers ahead! As played by SNL writer and sketch comedy veteran Neil Casey, the movie's antagonist, Rowan North, is a janitor who works at a hotel that is a hot spot for paranormal activity. He sets up devices around the city that release supernatural beings to terrorize and frighten its citizens, but more important than what he does is why he does it. You see, Rowan feels left out. He's been bullied his whole life, he reveals while looking in a mirror, and so now he wants to embrace the role of the bully. He rants about getting what he deserves, "showing them all," and being "afforded the dignity that I have been denied." Viewers are not really sure what exactly happened to Rowan in the past, but it's clear he thinks he deserves revenge.

Although he never mentions sex or gender explicitly, Rowan's attitude is still chillingly reminiscent of a variety of sexist communities. There are the Men's Rights Activists who feel that feminism is a stain on humanity and that men are the oppressed gender. There are the Pick Up Artists who encourage "alpha male" behavior and believe men are entitled to sex from women whenever they want. The fact that Rowan says he was bullied and is now acting out in revenge is also frighteningly similar to how violence against women — and even, rarely, mass murder — is sometimes perpetrated by men who feel that they are owed something or have been hurt at the hands of feminism.

Most of Rowan's dialogue reflects a feeling of entitlement and that of someone seeking out revenge for some past hardship. But much like the supposed oppression that trolls and MRAs feel, Rowan's hardship doesn't actually exist, at least to the extreme he makes it seem like it does. Rowan may have been bullied, of course, but that, nor being a janitor or not having a girlfriend isn't warranted cause to unleash havoc on the public or cause harm in order to get "revenge."

While Rowan's hateful words and arrogant pep talks to himself don't get as violent, thankfully, as many of those in the very real sexist online communities, his character still feels like a direct response to the men who spewed sexist backlash when the Ghostbusters reboot was announced. Upon hearing the news, these "fans" downvoted the Ghostbusters trailer on YouTube until it became the most disliked in history, and now, they are giving it 1/10 ratings on IMDB — with none of them actually having seen the movie yet. These men are irrationally determined to get their revenge and bring the movie down, and their attitudes and actions are truly sad to see.

With so much controversy, it seemed inevitable that this childish crusade of these haters would somehow be addressed within the film itself, and it's really brilliant how Feig and Dippold incorporated it into the movie. At a recent post-screening Q&A I attended, hosted by the Academy of Motion Picture Arts & Sciences, Dippold was asked how the backlash affected the writing of the film, and she admitted that some of the elements of the script may have been in response to the vitriol. "I think it subconsciously made its way in. Because I hadn't even started writing when it started," she said, noting that many of these haters are now seeking out validation on the Internet for their efforts. "It's a colorful group. There's a group that truly hates women and will say the nastiest most horrible things I've heard in my entire life, that make me gasp and clutch my pearls."

Ghostbusters addresses its own sexist backlash in a number of hilarious ways. The actors reportedly improvised their comments in the scene where they read hateful comments on their Youtube videos, and, in one hilarious nod, they even aim their proton beams directly at a male ghost's crotch during battle. But Ghostbusters' biggest comment on the misogynist shrieking has got to be the creation of villain Rowan. His entitlement, arrogance, and all around horrible nature just scream MRA Internet troll. Dudes like him can scream all they want, though, because with its expected success at the box office, Ghostbusters and its female leads are clearly getting the last word.