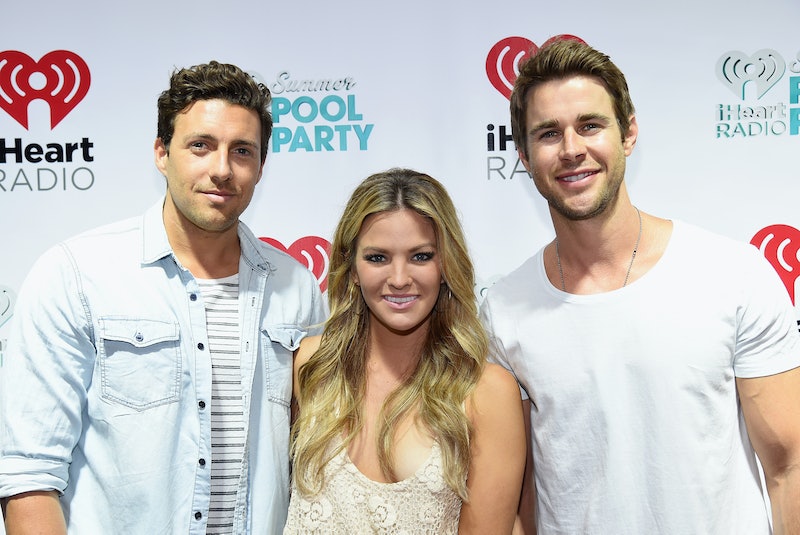 I'm all about watching The Bachelor franchises and hoping that the people there find love, but not everyone finds love during the show itself. Lucky, Bachelor Nation is its own little community full of people eager to make it work, like a real-life dating app, and it seems to have lent its services to one two-time veteran of The Bachelor of late. So, where is Becca Tilley now? We already knew that she became instant besties with JoJo Fletcher, but Tilley just might be finding love with Robert Graham, a fellow franchise "reject," as well. And, hey, she didn't even need to go to Bachelor in Paradise to do it.

As I mentioned, Tilley has been on two versions of The Bachelor at this point — she was the runner-up on Chris Soules' season, and returned for Ben Higgins' season as well — and Graham was originally from Desiree Hartsock's season of The Bachelorette, back in 2013. He also went on Season 2 of Bachelor in Paradise. Like Tilley, he has two seasons of Bachelor Nation shows under his belt, neither of which went his way. It might have been something the pair actually bonded over, because, as Wet Paint has documented, they formed a close friendship, taking trips together and appearing in numerous photos.

However, as close as they were, "Bex & Bobs," as they call themselves, haven't seemed like they were ready to make the leap from platonic to romantic. At least, until now. Tilley and Graham are on a group vacation in Greece together at the moment, and Tilley has posted some photos to her Instagram that are pretty suggestive of a relationship, including one where she's literally nuzzling the side of Graham's face. I mean, just look at this.

You're really gonna tell me there's nothing going on between these two? Harrumph. I'd love it if the (fingers crossed!) couple confirmed it, but, until then, I'll just continue stalking their respective Instagrams, looking for clues.

Other than this supposed relationship, Tilley has been keeping busy on social media and jet-setting around the world. At the time of the airing of both Soules and Higgins' seasons, her occupation was listed as "Chiropractic Assistant," and she seems to have worked in a salon in Rancho Santa Fe, according to the San Diego Union Tribune. However, it seems like, every other day, there's a new shot of her cavorting on a beach or schmoozing with other Bachelor Nation contestants. So I'm not sure she's still employed at either of those locations.

What I do know is that her sense of humor about herself is still very much intact, as evidenced by the following photo. Remember I said she'd been hanging out with a bunch of Bachelor Nation alums? Well maybe you'll recognize these two?

Whether it's becoming best friends with JoJo Fletcher, being cool with her exes Ben Higgins and Chris Soules, or driving us crazy trying to figure out if she's dating Robert Graham or not, Becca Tilley has proven she's at a great place in her life, and she knows how to have fun. I'm pretty sure that's all that matters.