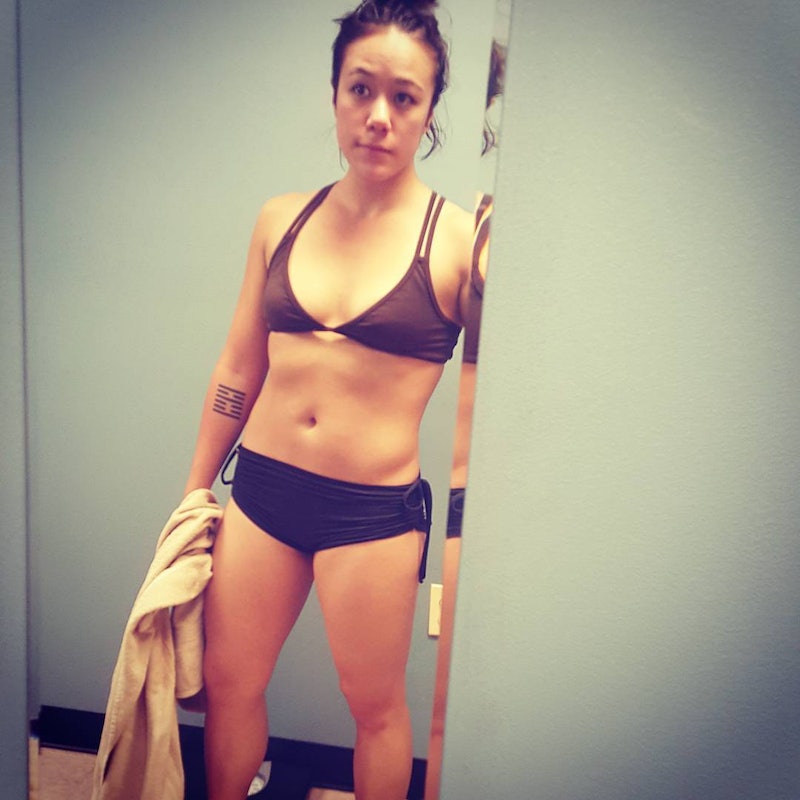 For as long as I can remember, I've always had a more athletic body type than the women I saw portrayed in the media. I've heard plenty of crap over the years about my physique, some of which I've been able to brush off, some of which has haunted me for years. People don't tend to be very kind and accepting of women who have some extra muscle on them, which is why it's important to consider the impact our words have on them.

Our society, for the most part, is still convinced that women should embody a "girly" kind of femininity and that men should display burly masculinity. Therefore, women who have "too much" muscle definition can often be at the receiving end of cruel remarks and passive aggressive comments, all because our society isn't comfortable with seeing a badass woman who's more built than the typical woman on the cover of a magazine (unless she's a professional athlete).

Well, society should start getting woke about muscular, athletic women — and language is a good place to start. Here are eight things we need to stop saying to athletic women, STAT.

1. "At least you can eat whatever you want since you work out so much."

It's not surprising that 20 million women in the U.S. suffer from some kind of eating disorder, especially when you look at what an unhealthy relationship with food our society fosters. We're constantly being convinced to go on a diet or try a new workout program that will help us slim down.

I've seen so many people admire athletic women's bodies, only to incessantly comment about how much extra food they're able to eat because they exercise often. It proves that we've got it all wrong about exercise. We shouldn't do it just so that we can have a cookie at the end of the night (you should have one whenever you feel like it, anyway). We should move our bodies because it makes us feel good — and because it keeps our bodies healthy.

The whole concept of femininity may be socially constructed, but if you're a woman with visible muscles and physical strength, you'll definitely hear remarks at some point about how feminine you look "anyway." In my experience, most people will try to be nice and compliment me on my accomplishment of being both strong and feminine, but it sounds more patronizing than anything else. It also sounds like you're saying my muscles are only acceptable because I've maintained some femininity.

No, it's not. It's not better to be any kind of body instead of another kind of body. It doesn't make us feel any better when you compare our physique to that of another woman and shame her. Rather than pitting us against each other, consider accepting us for just who we are, regardless of how the people around us may look.

This loops us back to the socially constructed idea of femininity. Although we've seen some truly inspiring women in the spotlight lately who break the mold of what standard beauty is, like MMA fighter Ronda Rousey and tennis champion and body positive inspiration Serena Williams, women still feel the pressure every day to keep the "bulk" to a minimum in order to be considered beautiful and womanly. Hearing comments like this from friends and family who think they're trying to help us only makes us nervous that we'll be ridiculed for our muscles.

I heard this piece of advice — and I use "advice" very loosely here — from a family member when I started doing Crossfit and lifting weights a couple years ago. I had never physically felt better in my life; I felt strong and capable, and I was reveling in a sense of accomplishment every time I left the gym. As soon as I heard this, though, I became extremely self-conscious. It took me months to recover from it and build my confidence back up.

There is no easy way for athletic women to respond to this. We automatically feel guilty, even though we shouldn't — and you definitely shouldn't either just because you're not particularly athletic. The last thing we should feel when we look at another woman's body who is different than ours is shame, no matter if you're jealous about their long legs, their curvy butt, or their toned biceps. Rather than interpreting their physical attributes as a sign that you should change something about yourself, celebrate what they look like and simultaneously give yourself some self-love.

The more we assume that men will be intimidated by athletic women, the more we will condone the belief that physically strong women are too overpowering to be attractive. Sure, there are probably some dudes out there who can't handle a powerful woman, whether she's a decorated athlete or a successful business owner, but let's not give those guys any airtime.

7. "So is everyone in your family super fit?"

It's simply bad form to ask someone if everyone in their family looks like them, as if you're looking for an explanation for their figure. Would you ask a fat person if everyone they're related to is fat? Or a skinny person if their parents are skinny, too? It's almost like people are surprised that a woman can be so athletic, so they go around looking for a reason why they ended up this way. You don't need to go digging for answers. Our muscles are perfect just the way they are.

8. "I didn't even know girls could get muscles like that..."

I thought by now people would realize that this is a sexist, rude thing to say, but alas, I suppose I expect too much of the world. It's one thing to be impressed by what a woman can do with her body, but it's another thing entirely to reduce her accomplishments to what you think her gender is capable of. Women can do anything they want to do, regardless of what we've been told our boundaries are. And sometimes, our bodies reflect that strength.