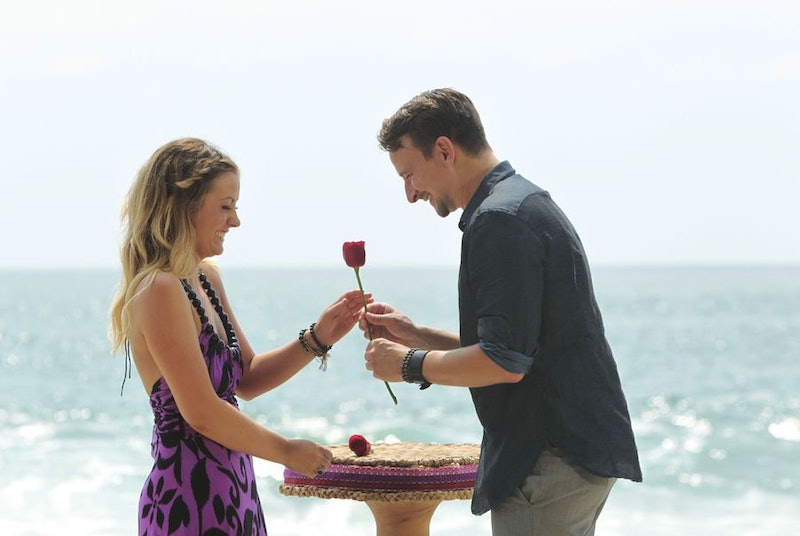 Bachelor In Paradise is over, and I’m officially in mourning. How will I pass the time on Monday and Tuesday nights? My world is empty once again, so I’m looking to the future and thinking about the couples that just got engaged. Carly and Evan were definitely the dark horse pairing of the season. Carly wasn’t too thrilled with Evan at first, but I guess he wore her down and they’re going off to be engaged and live happily ever after in Nashville. A wedding is clearly on the way, so will Evan and Carly get married on Bachelor In Paradise 4 like Marcus and Lacy did? I have to say, I hope that Carly and Evan don’t go the married-on-television route.

Carly and Evan were often branded the “weird” ones on their season and on Paradise. It was a big part of Evan’s proposal that he can be his weird self when he’s with Carly, and they can be in love and be quirky and cute and get married and all that stuff. I feel like getting married on Bachelor In Paradise Season 4 is just so not them. I mean, we’re talking about Carly and Evan here. Carly puked after a date that she had with Evan because she had to kiss him for more than 90 seconds straight after eating a hot pepper — there was a literal strand of saliva between them when they detached. Then, Evan faked an illness to get Carly to stay in the Mexican hospital with him while he recovered.

Does it seem like these two would have a romantic, fairytale wedding on the beach in Mexico? Something is bound to go wrong if they do. I’m not saying that Carly and Evan are going to break up, but it’s certainly hard to marry someone you got engaged to after three weeks. Marcus and Lacey broke up about a year after they got “married” (it wasn’t legal) on Paradise, and Marcus told People it was because, “her priorities changed, what she wanted in life changed. She was just a very different person from when I first met and got engaged to.” The track record for BiP marriage ceremonies isn't great.

There’s also another thing that complicates their public marriage quandary: Evan’s children. Does he want his children to watch their dad get married in a reality television spectacle? I mean, Carly and Evan met on TV, but they can have a pretty normal life now, with Carly as a stepmom and a wife and Evan as father and husband. Carly and Evan don't seem to be “show” people, and for that reason, I think that they won’t and shouldn’t get married on Bachelor In Paradise Season 4.

I hope Carly and Evan go the distance, but I don’t necessarily need to see it to believe it.