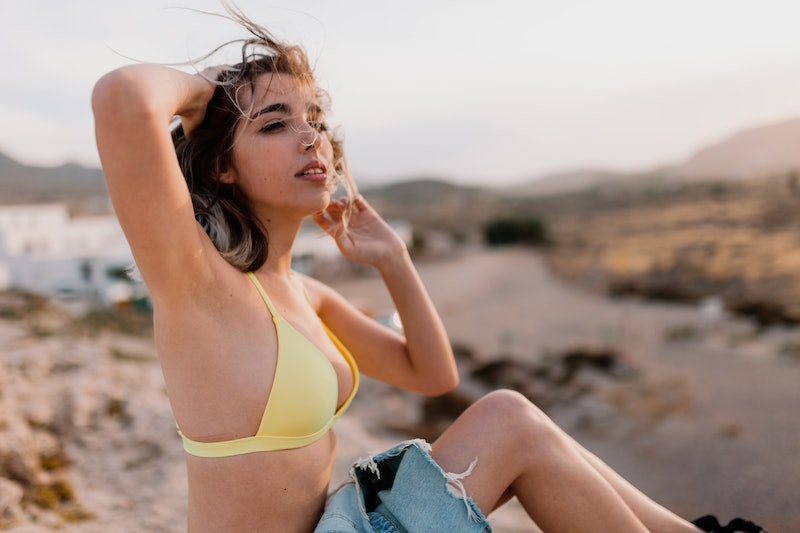 Eating disorders are complex illnesses that affect 20 million women and 10 million men in the U.S. alone — and their cause is anything but simple. They develop due to a complex mix of biological, psychological, social, and interpersonal factors. So while it's true that there so many ways society influences us to develop eating disorders, it's also important to understand that people suffering from disordered eating habits are dealing with much more than just culturally-encouraged body image issues.

Not unlike other mental illnesses, such as schizophrenia, genetics seems to play a major role in a person's development of an eating disorder. As the National Eating Disorder Association (NEDA) explains on their website, "In some individuals with eating disorders, certain chemicals in the brain that control hunger, appetite, and digestion have been found to be unbalanced." Additionally, NEDA goes on to state that eating disorders often run in families, which further proves that some people are more genetically predisposed to disordered eating that others.

1. Excessive Use Of Photoshop In Magazines

Additionally, according to NEDA, "Numerous correlational and experimental studies have linked exposure to the thin ideal in mass media to body dissatisfaction, internalization of the thin ideal, and disordered eating among women." When our cultural norm is to photoshop an already thin model to the degree that her head actually appears wider than her waist, it's really not possible to contest that society's idealization of "skinny" plays a role in eating disorder development.

2. Glorifying The "Thin Ideal" In Advertising

I'm sure you don't need me to point out the rampant sexism, body-shaming, and lack of diversity that has existed in advertising since, well, forever. Society bombards us with images of "perfect bodies," as well as diet and weight loss ads, all of the time. Whether it's from fashion ads, television, those incessant, pop-up, diet ads online, or it's those plastic surgery ads plastered all over the subway, studies show that media does contribute to the development of eating disorders.

Back in March of 2015, Harvard's School of Public Health published a post on the connection between advertising and eating disorder development. In the post, titled, "Advertising's Toxic Affect On Eating And Body Image," Harvard discussed ad critic and author, Jean Kilbourne. Kilbourne, who's best known for her documentary, Killing Us Softly, which focuses on images of women in the media, points out that most Americans are exposed to an average of 3,000 advertisements daily. Since the focal point of most of these ads is some depiction of idealized, female beauty, they ultimately contribute to body dissatisfaction among women and girls. In their post on the topic, Harvard addressed the issue this way:

" The American ideal of beauty has become so pervasive that 50% of three- to six-year-old girls worry about their weight. And on the island of Fiji, the arrival of television heralded a boom in dieting among women and girls who before then hadn’t realized that there was something wrong with them."

Research suggests that social media in general could be making us miserable. As Teddy Roosevelt once said, comparison really is the thief of joy. That said, it appears that women are conditioned by social media to dislike their appearance more frequently than men are.

As I'm sure you're well aware unless you avoid all social media like the plague, it seems like there's always a new social media "fitspo challenge" trending on social media for women to aspire to. Sometimes, these posts can be great motivators to start living a healthier lifestyle. Unfortunately, though, according to recent research, fitspiration posts are often just one more way society influences women to feel bad about their bodies. In turn, this drop in self-esteem could be contributing to the development of eating disorders among women.

In a recent study conducted by Flinders University, 130 women were divided into two groups. One group was shown travel images while the other was shown a variety of fitspiration images. Unsurprisingly, the second group ended up reporting more negative moods and body dissatisfaction afterwards than the first.

Whether it's a Facebook post of a perfectly toned, healthy woman doing yoga, or it's various Instagrams of #thighgaps, #thighbrows, or China's scary #BellyButtonChallenge, it's evident that social media is just one more way society influences women to develop disordered eating habits.

While I think it's safe to say Hollywood is getting slightly more inclusive with the body types they portray, (such as Lena Dunham's character, Hannah Horvath, on Girls); and popular TV shows, such as AMC's The Walking Dead, are featuring more primary characters of color than we've seen in the past, the way women are represented in television and film still remains disproportionately white and thin.

While there are so many reasons Hollywood's diversity problem needs to be remedied ASAP, the role it plays in influencing women and girls of color — and also just plus-sized women in general — to develop eating disorders is definitely compelling.

5. Type-Casting Plus Size Actors As The Unattractive "Sidekicks"

To be fair, we've seen an increase in awesome, plus-sized, body positive, female characters in TV and film in recent years. Mindy Kaling has been killing it as the main character on The Mindy Project for years now, and Rebel Wilson's Pitch Perfect character, "Fat Amy," arguably steals the show.

That said, it's no secret that plus-sized actors have typically played the sidekick to tall, thin, "conventionally beautiful" women in TV and film for years. On top of that, the first plus-size model to land an editorial in Sports Illustrated's swimsuit issue was Robyn Lawley — and that happened just last year.

It's only been in the past few years that plus-size actors and models have had access to the kind of exposure that slim women have always had. Intentional or not, the way plus-size women are represented in media is absolutely one more way society influences all women to adopt disordered eating habits.