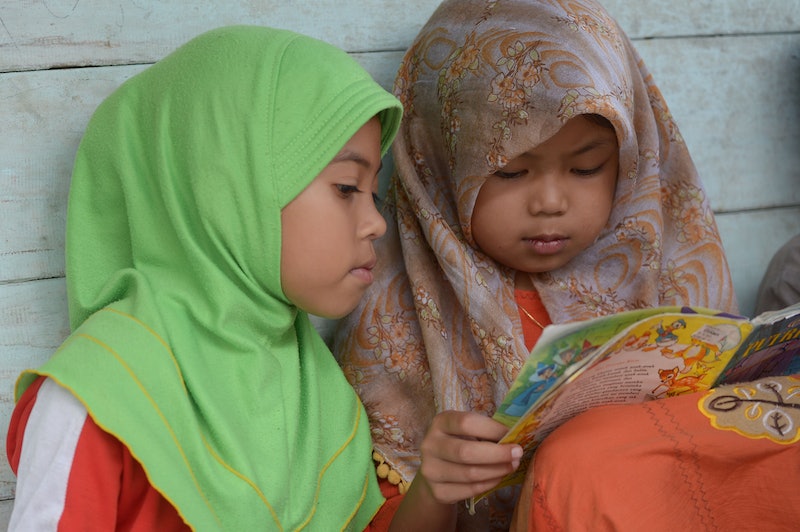 You hear about it so often these days that you just might wonder: How diverse is children's literature, really? The numbers have been improving slowly, but they remain far from true representation. Now, a new, shareable infographic has the numbers you need to talk about diversity in kidlit, and — admittedly — the outlook is pretty grim.

Since 1985, the University of Wisconsin - Madison's Cooperative Children's Book Center (CCBC) has compiled data on diversity in children's book publishing. For the first few years, the CCBC concerned itself only with those books that were written or illustrated by black authors. In 1994, researchers "began also keeping track of the numbers of books by Asian/Pacific and Asian/Pacific American, First/Native Nation and Latino book creators," as well as those books written about people of color by authors of any race.

Several years ago, children's book illustrator Tina Kügler created a widely circulated infographic, "Diversity in Children's Books 2012," which used then-current data from the CCBC. At the time, 93 percent of children's books were about white or non-human characters*.

Although the numbers have changed in the years since Kügler first published her illustration, it has remained in use. In response to St. Catherine University professor Sarah Park Dahlen's request for information on an updated version, a chain reaction led to illustrator David Huyck's involvement. Huyck created a new infographic on diversity in children's literature, and released it under a Creative Commons license.

The good news is that children's literature is roughly twice as diverse now as it was in 2012. The number of white and non-human characters is down to 85.8 percent. Representation for black characters has more than doubled, while Latinx, Asian, and Pacific Islander characters are also showing huge gains over their 2012 numbers. Unfortunately, the numbers are still low across the board, and Native American and First Nations characters continue to make up less than 1 percent of children's book characters. Books about people of color only barely outpace those about animals, trucks, and other non-human characters.

No wonder Marley Dias got tired of reading about white boys and dogs.

We need diverse books, so that children grow up seeing themselves reflected in the stories they read. White children have no problem locating books about people who look like them, but children of color do not have that luxury. Although 37 percent of people in the U.S. are not white, only 10 percent of children's books published since 1994 "contain[ed] multicultural content," according to Lee & Low Books.

Although children's book publishing appears to be slowly growing more diverse, it remains to be seen whether the trend toward inclusive content will continue in this matter. Gains in representation can be lost just as quickly as they were made, as this year's Man Booker Prize shortlist shows.

So buy diverse books. Talk to your local librarian about creating a more inclusive selection. Pursue the stories of people from marginalized communities, and support the storytellers. Do your part, and we can make sure every kid has a representative bookshelf.

*The exact percentage of books about non-human characters is not accounted for on Kügler's infographic, but it is a distinct category on David Huyck's image.

More like this
Jessica Simpson On The Time She Was Pursued By A Backstreet Boy & An *NSYNC Member
By The Editors
Netflix Shut Down 'Bridgerton' S3 Rumours About A “Very Dark” Storyline
By Bustle
We’ve Entered The Hot Boy Reader Era
By Samantha Leach
8 Charities To Donate To During Black History Month
By Alexis Morillo
Get Even More From Bustle — Sign Up For The Newsletter
From hair trends to relationship advice, our daily newsletter has everything you need to sound like a person who’s on TikTok, even if you aren’t.