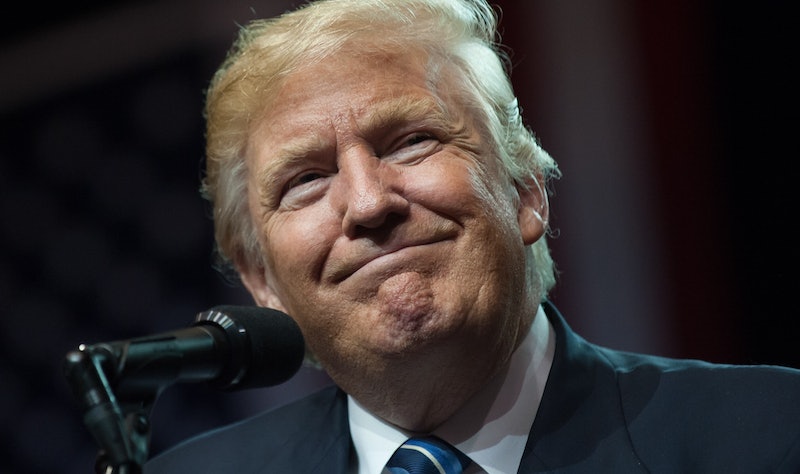 Ever since Democratic presidential nominee Hillary Clinton made the unfortunate mistake of accidentally stumbling as she left a 9/11 Memorial event, the political discourse has been abuzz with questions about both candidates' health. On Clinton's part, it was clear by Sept. 12 that she had been diagnosed with pneumonia. For his part, Trump discussed his health with Dr. Mehmet Oz, for a segment that is scheduled to air on Thursday, Sept. 15 during Dr. Oz's eponymous show — but should we really care about Trump's weight or BMI? Looking at his past comments on women and women's bodies, it's clear we should care more about that than his weight.

According to audience members at the taping, and the many media reports that have followed, Trump revealed to Dr. Oz in the segment that he weighs 236 pounds and stands 6 feet and 3 inches tall. At that size, Trump would have a body mass index (BMI) of 29.5, which would classify him as overweight — and near obese. Trump reportedly mentioned wanting to lose 15 to 20 pounds, according to New York Daily news.

This type of scrutiny of Trump's health may seem fair based on the recent scrutiny of Clinton's health. It may even seem fair simply because Trump is running to lead the free world. But even if such scrutiny is fair, is it what voters should be focused on at this point in the presidential race?

Frankly, who cares about Trump's BMI? For one thing, BMI has been widely criticized as an incomplete or potentially inaccurate indicator of one's health. That's because it's calculated based solely on a person's height and weight. It does not take age, gender, lean muscle mass, or really any other factor into consideration. It's a function of two numbers — and there's really only one of those numbers that individuals can change.

Even if BMI were a more respected metric, would it be worth taking into consideration? After all, isn't comparing the physical qualities of the candidates kind of like stooping to Trump's level? Sure, a president should be in good health, but at this point, both Trump and Clinton have campaigned day in and day out for more than a year, which certainly takes some stamina.

Throughout his campaign, Trump has been known for his outspoken insults, particularly of women. These insults have come from throughout his career, showing a troubling pattern to voters. For instance, he once said that Rosie O'Donnell has a "fat, ugly face," and that she's "a very unattractive person, both inside and out."

For years, Trump has slammed women with negative comments and offensive insults, many of which have something to do with their gender or appearance. (Do you see the irony in talking about Trump's height and weight, yet?) In some ways, he has softened his approach toward women recently. For instance, Trump's daughter Ivanka has championed the candidate's new plan for paid family leave, a system that would seemingly help women and their families. Still, that plan doesn't change the fact that Trump has spent years critiquing women on their bodies and their roles in society.

Let's not dwell on Trump's BMI or the size of his suits. Rather, let's focus on the way that he speaks to others and, particularly, the things that he says about women's bodies. Trump may have a valuable ally in his older daughter, but his past patterns remain troubling — much more troubling than his BMI.