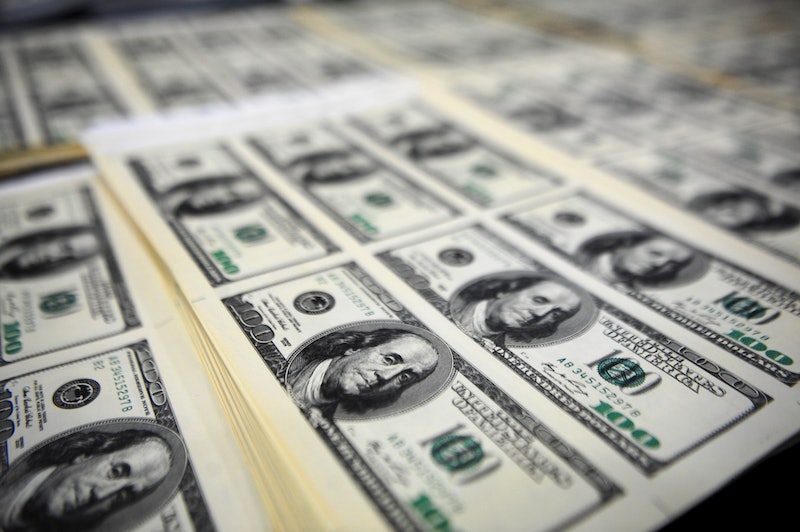 It's well known that, on average, college graduates tend to earn more than they would if they hadn't gone to college — but apparently that's more true for some students than others. A new report from the Center for American Progress shows that the gender pay gap begins almost right after college, and grows rapidly to boot. In fact, 10 years after enrolling, female college graduates who received federal aid still aren't making as much on average as male college attendees who received aid were earning six years after enrolling, according to the report. So much for education being an equalizer.

In many ways, this report confirms things we already know about the gender pay gap. There are many ways to calculate the gap: You can compare the salaries of men and women with similar job titles (though this doesn't account for the fact that women are often passed over for promotions); you can look at the salaries of men and women working in the same industry (though this doesn't take into account that women often face institutional barriers to joining high-paying industries); or you can just look at the average woman's salary in this country versus the average man's. No matter how you calculate it, though, it's always present in some way, shape, or form.

And it seems the college-educated are no exception to the rule. "While the gender wage gap is nothing new, the picture painted by the College Scorecard earnings data is not pretty," the Center for American Progress writes in their report. "Across every college sector and level of selectivity, women who received federal aid had lower annual earnings 10 years after entering higher education than the annual earnings of their male peers only six years after entering."

Moreover, this was true even though the Center's analysis included college dropouts — which makes it all the more notable, as dropouts are more likely both to earn less than graduates and to be male. It suggests that the gap exclusively among college graduates may be even higher.

Of course, this isn't to say that women who go to college aren't better off than women who don't. As the report explains, "College graduates are likely to have higher earnings, higher employment, and lower chances of defaulting on their student loans than workers without a degree. And women with a college degree earn more than women without one."

You can also look up the gap for your alma mater here.