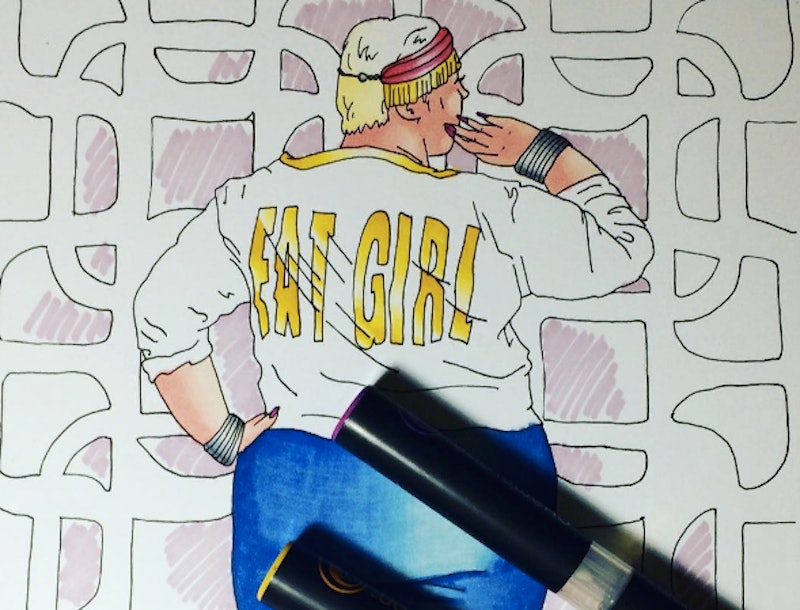 I'm coloring in an image of Stacey, an alternative, fat WOC whose blue hair and green lipstick have mentally and sartorially inspired me on more than one occasion. When I get to her midsection, my hand bends and curves, following the trajectory of her belly rolls. I smile, thinking of how far removed the Body Love: A Fat Activism Colouring Book is from anything else of its kind.

As I remember the Disney princesses I sloppily Crayola-ed in as a kid, I wonder how my young, chubby self would've responded to these drawings. Would I have looked down at my own protruding stomach and jiggly thighs, and felt a little less othered?

"I absolutely believe that repeated exposure to certain imagery will help to normalize it, and I think that that is a very important part of this book and the need for more body diversity in media," Allison Tunis, the artist behind Body Love, tells me over email. "The value of viewing and coloring these images is that not only do we see people more like ourselves, our friends, our families, but we see that they are valid and valued enough to be shown in a positive likeness, and worthy of representation."

Tunnis tells me that for over 10 years she has created mixed media work specifically tackling body image and oppressive standards of beauty. A Drawing and Painting graduate of the University of Alberta in Canada, she went on to receive a graduate diploma in Art Therapy through the Vancouver Art Institute.

The last two years have arguably seen a certain boom when it comes to two of the artist's passions: The mainstreaming of body positive and fat positive dialogue, and the popularity of adult coloring. And both of these phenomenons have undoubtedly been beneficial to the mental (and physical) health of many.

Although Marygrace Berberian, certified art therapist and the Clinical Assistant Professor and Program Coordinator for the Graduate Art Therapy Program at New York University, told CNN in Jan. 2016 that coloring, in and of itself, "cannot be called art therapy because art therapy relies on the relationship between the client and the therapist," she did note that the practice undoubtedly has "therapeutic potential to reduce anxiety, create focus, or bring [about] more mindfulness."

This is one of the many reasons that Tunnis chose to focus on the celebration of fat activists in particular. One of the principal motivators was that she feels that the goals of the fat acceptance community have grown somewhat convoluted as more and more folks have embraced the "body positive" tagline.

"Fat activism is still seen as 'wrong,' 'glorifying unhealthy living,' and 'hating skinny people,'" Tunnis believes. "[It's actually] about wanting respect for bodies that are generally degraded, and to show how successful, sexy, and amazing they really can be. Body positivity is a very large umbrella, and while it would definitely be possible to do a coloring book with that focus, I felt more comfortable with a narrower focus that specifically spoke to my own experience and inspirations."

Media and mainstream representation of fat individuals in successful, sexy, or generally amazing scenarios remains very rare. Even though the 2016 A/W New York Fashion Week has seen five plus size models walk designer Christian Siriano's show, even if actor Gabourey Sidibe got an unapologetic sex scene on Empire in 2015, and even if a model over a size 20 is now largely a household name, these individuals and their accompanying recognition remain the exceptions. Annual "wins" for fat visibility are typically countable on one or two hands.

This is precisely why fat acceptance work and the fat activists themselves are so crucial and progressive. When a body type is socially treated, at large, as something unworthy of visibility or tolerance, growing up in that particular body type is rarely easy. As a plus size woman, Tunnis has experienced the radical benefits of work in size acceptance firsthand: A movement she was first introduced to through the work of the blog This Is Thin Privilege and activist and author Jes Baker of The Militant Baker.

"Both of these really challenged my opinions on what I experienced in life as a fat person, and tapped into my feeling that there was something wrong with the idea of waiting to live your life until you reached some unattainable ideal," Tunnis tells me. "I had been dieting and attempting weight loss goals for 20 years, and I was only just starting to think that maybe it wasn't the right road and that I might be missing out on life."

One of the most common messages fat individuals seem to hear in their lives is that true existence — a fulfilled, passionate, fun, adventurous existence — is only achievable upon weight loss. "The thin woman within" is an ideology further perpetuated by things like "fat pants" imagery: The photos so often accompanying weight loss ads featuring thin, happy people standing in their former large pants as a picture of their former fat selves looms gloomily in the background.

Body Love is the exact opposite of this kind of thinking: The fat individuals depicted — be it yoga teacher Jessamyn Stanley in a fierce pose, or writer and Ready To Stare designer Alysse Dalessandro in a bold tee, or fat burlesque dancer Noella Deville in her element — are proof that living a fulfilled, free life doesn't come with a size requirement.

Although this is among the lessons to be garnered from the coloring book, Tunnis wants to give props to the influencers themselves: The fat individuals who've refused to shrink in size or presence to accommodate anyone else's idea of acceptability.

For her, fashion bloggers were crucial on the journey to "not be afraid of what others would say," encouraging her to wear horizontal stripes, sleeveless tops and dresses, knee-bearing garments, and leggings with no apology. The photography of Substantia Jones and her Adipositivity Project was also spiritually enlightening. "Her work really shows the beauty of the body and form, and the love that we can have for ourselves and each other in so many ways," Tunnis says.

She's also taken Jes Baker's lessons in Things No One Will Tell Fat Girls to heart, particularly in the realm of dating: Lessons like "fat chicks can bang hot guys, there are people who are attracted to all sizes of women, and you don't need to settle for someone who is just OK with your body."

Although fat activism has undeniably been a positive force in Tunnis' life, she does not want anyone to mistake the progress made thus far with any notion of fulfilled size acceptance. As well as seeing tangible change in grander political thinking, the artist wants to see change in people's day-to-day treatment and tolerance of fat bodies.

"I'm hoping for more understanding of the challenges and prejudices that fat people face, and more conscious attempts to work against perpetuating fatphobia and stigma in our everyday lives," she tells me. "With the mainstreaming of body pos, many people are OK with saying, 'Yeah, love yourself,' but then are still quick to promote diet or weight loss advice if someone expresses a bad body day, or are not willing to listen and learn from the experiences and stories of people living in marginalized bodies."

Tunnis feels that increased mainstream representation of fat bodies in positive contexts will help. But she also thinks people need to largely get over "the idea that mainstream representation of fat bodies would lead to an allover takeover of fat people." Her body and fat positivity are not about attempting to condition all individuals to want to be fat. Instead, they are about attempting to encourage all individuals to reassess the disdain they maintain for certain body types, and think critically about the damages that creating aesthetic-based hierarchies can result in.

A few days after receiving my copy of Tunnis' book, I'm coloring in another photo. This one is of Noella Deville. Although she's wearing lingerie and tassels, most of her body is exposed: Her love handles, her belly rolls, her thick thighs, and her double chin unconcealed.

It's the most time I've spent looking at the image of a semi-nude fat body outside of my own in quite some time. And I'm loving every moment. I'm loving how relatable her body feels to my own. I'm loving the beauty of her power pose on stage. I'm loving the reminder that there is nothing wrong with her body: And that any system or institution or social ideology that insists on proclaiming otherwise is the real flaw at hand.

If repeated exposure to marginalized bodies can help de-stigmatize them, it's suddenly very clear that taking the time to create artwork out of these bodies will do very much the same. And through a seemingly simple coloring book, that's actually something we can all do.

More like this
Here Are All 703 Outfits Rachel Wore On Friends
By Kat George
Ayurvedic Principles & Family Are At The Root Of Fable & Mane
By Justine Knight
My Lip Color Lasted Through A 3-Course Meal, Thanks To This Viral Lip Stain
By Isabella Sarlija
This Genius Brow Gel Is Actually Designed To Boost Hair Growth
By Jen Fiegel
Get Even More From Bustle — Sign Up For The Newsletter