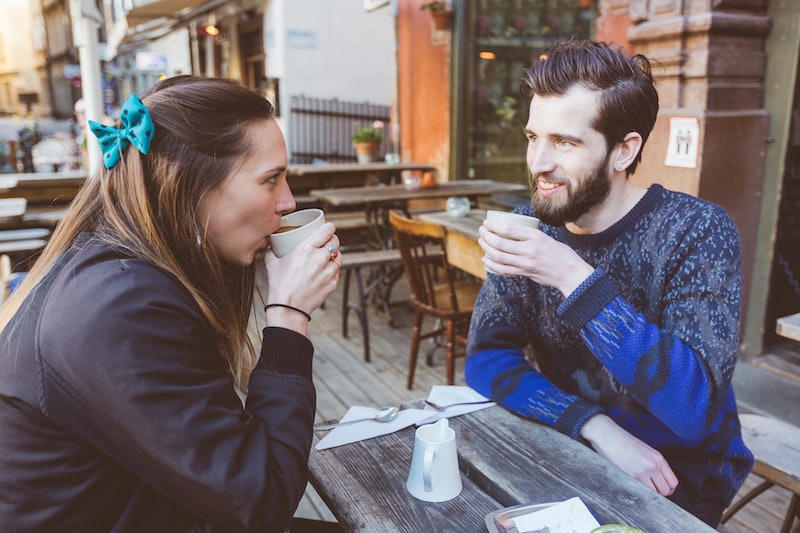 I’ve heard far too many times from friends that they had, what they thought, was a great first date. I’ve also heard from these same friends that, despite what they thought, they rarely get to a second date. Which, of course, leads to a bunch of us sitting around picking apart what was said, what could have been said, and overall confusion. Is there some sort of magic trick that leads to a second date that no one is telling us about or something?

Dating app, Coffee Meets Bagel, surveyed more than 1,000 couples who met on their app to see what makes for a great first date that is more likely to lead to a second date. Then, Coffee Meets Bagel surveyed 6,000 more singles to get even more input on thoughts surrounding first dates and their success rate. I mean, could there really be an intricate science to getting to a second date?!

This, of course, isn’t the first time a study has been conducted in the hopes of unlocking the mysteries to get to a second date. Earlier this year the Singles in America survey interviewed over 5,000 U.S. Singles to see what it takes to see someone again. What that particular study found was that if, on your first date, you eat sushi, a second date is almost guaranteed, as well as if you go on a date around sunset. (Why those two things, among a few other random things, I don't know.) There’s also the thinking that maybe everyone deserves a second date as a second chance to prove themselves worthy of your time.

But because we all want to find on ourselves on a second date — at least sometimes — here's what Coffee Meets Bagel found in their study on the topic.

1. Chat For More Than A Week Before Your First Date

According to the survey, you should definitely chat before a first date. Those who chatted for at least a week (or more!), were twice as likely to get themselves to a second date. Basically, even if you’re feeling a connection through messages and your soon-to-be date is laughing at all your awesome jokes, it’s still important to wait a bit. Besides, what if they stop laughing at your jokes?! Is this really someone with whom you want to go out? Let’s be real.

2. Go To Dinner On The First Date

Although the ideal first date for most singles, at 38 percent, is to go out for drinks, it’s those who go to dinner on a first date who manage to make it to a second date more often. In fact, the least ideal activity for a first date, at 14 percent, is dinner. Why is that? Don’t people like food?

3. Go Out On Your First Date During The Week

Perhaps, after a long day, the last thing you want to do is go out on a first date, but those who are open to going on a mid-week first date have a higher chance to making it to a second date. Maybe it’s because you can’t stay out late, so your time is limited, and you’ll just have to see them again to hear the end of that funny story they were telling when the clock struck midnight.

Of those surveyed, 73 percent said their first date cost less than $50. Which, if these people are going to dinner, leads me to believe the majority of those surveyed don’t live in New York City… or got a couple $1 slices of pizza somewhere down on the Lower East Side.

According to the findings, the majority of those who made it to a second date actually skipped the first date kiss. Only 29 percent kiss on their first date while, overall, 45 percent say they usually kiss on the first date. But it was those who held off who were more likely to see the person again. Of course, if you're both feeling it, go for it, but perhaps this finding shows that if you had a good time and didn't kiss, there's still hope things will work out.

If you’re into someone and want to see them again, then don’t play games. Of those surveyed who found themselves on a second date, 56 percent had texted each other right after the date. I mean, if you had an awesome time, why wouldn’t you want to let them know ASAP and thank them for a great night? Take that, everyone who told you to play hard to get.

One of the biggest factors in getting a second date? Actually planning the second date during the first date. If things are going that well, why not? Finding someone with whom you connect and enjoy spending time with is no easy feat. So when you do find someone who fits the bill, take a risk and see what’s in store.